A key negative of LinkedIn being taken over by Microsoft back in 2016 was that we lost access to LinkedIn's regular performance reports, which included detailed insights into member growth and other metrics.

Now, we have to settle for smaller updates within LinkedIn's broader performance reports, which don't provide the same level of insight, but can still give us some idea as to what's happening on the platform.

This week, as part of Microsoft's FY20 Q1 report, the company included this brief update on LinkedIn's current status: 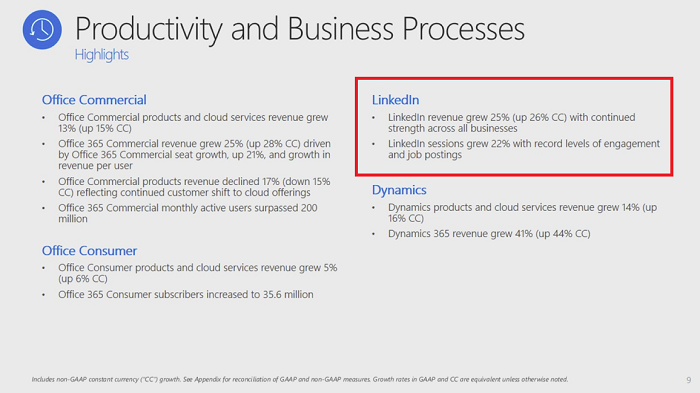 As you can see, 22% growth in user sessions, continuing the trend of 'record engagement' levels which Microsoft has reported in its past few updates. That also adds to the 645 million members LinkedIn now sees globally, which has grown from 575 million a year ago.

If you haven't been paying attention to LinkedIn, it may be worth more of your focus in 2020. The platform has been working to increase user engagement through various means, including improving its feed algorithm to give more user updates a greater of a share of overall attention, and showcasing more engaging, relevant news stories from the day, via its expanding team of 65 journalists who work to maximize user activity.

That's facilitated new growth on the platform, and new opportunities for engagement. Again, if you haven't tuned in and taken a look at the conversation around your business niche on the platform, it may well be worth your time, over the next few months, to dig a bit deeper, and get a better handle on the potential for your 2020 marketing efforts.

As noted, Microsoft has reported LinkedIn seeing 'record levels of engagement' in each of its updates over the last year, and the platform continues to boost those numbers. Through listening to its community, and responding to what's driving engagement, LinkedIn is working to become a more active hub of professional conversation.

And that could lead to significant marketing opportunities. Worth checking out for your business.