Could this become a new sponsorship option for Facebook marketers?

This week, Facebook has announced a new promotion for the latest film in the 'Fast and the Furious' franchise, which includes new chat backgrounds and effects, and an interactive experience that incorporates behind the scenes insights and video clips.

Are you new to the fam or a stan? Prep for #F9 by watching all the films in the @thefastsaga with MovieMate™, the best ride along buddy. ????️
✔️Answers your burning questions
✔️Access never-before-seen pics & videos
✔️Available on your time!

"Starting today, fans can access Movie Mate, a first-of-its-kind “second screen” chat experience exclusively for Messenger along with a custom 360-degree background and chat theme (also available on Instagram). Movie-Mate is available for each of the Fast Saga films. It answers movie watchers’ burning questions and offers never-before-seen photos and footage in real-time as they’re streaming their favorite Fast Saga films."

Movie Mate, which is a separate, third-party offering, has been integrated into the Messenger experience, adding another element to the app's Watch Together viewing mode, which enables users to view video content in real-time together with their Messenger contacts.

Through this new process, when a user starts a new chat through the Fast & Furious Facebook page, they'll be prompted about their level of fandom "so that your experience is customized to your level of knowledge". Viewers can then watch exclusive content and add-on material - while as noted, Facebook's also added new 360-degree backgrounds and chat themes, which are also available on Instagram.

The chat themes are a new offering, with Facebook launching the first 'Star Wars' and 'Selena: The Series' themes last month, providing a new way to connect with fans. 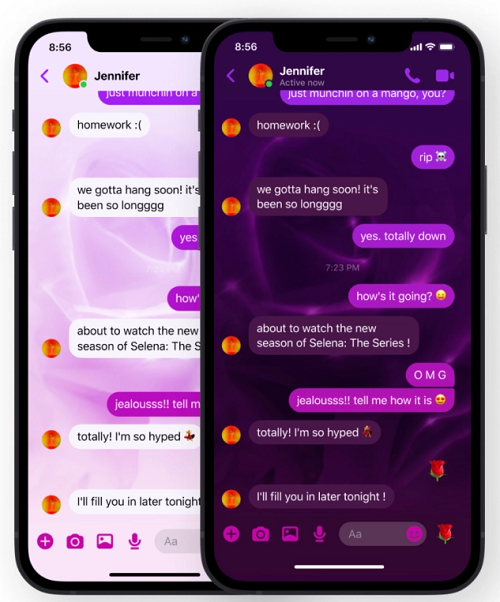 That could become a new promotional option, and while it would be a fairly high-end tool, likely only available to big-spending movie studios and the like, it could be another extension of Facebook's promotional offerings, providing more ways to boost awareness and connection.

The Movie Mate integration also facilitates more interactive features for co-watching, and with more users looking to stream videos together, that could also become a valuable promotional tool.

It's an interesting experiment either way - if you want to check out the new F9 Messenger experience, head to the Fast & Furious Facebook page and click the Messenger icon to begin a chat.