With engagement in Meta’s apps seemingly in decline, based on various reports, it’s increasingly keen to capitalize on its wins where it can, which is why it’s rolling out a new way to encourage more engagement stemming from Facebook Groups, via a new Community Chat option that’ll facilitate topic-based discussion groups within Messenger. 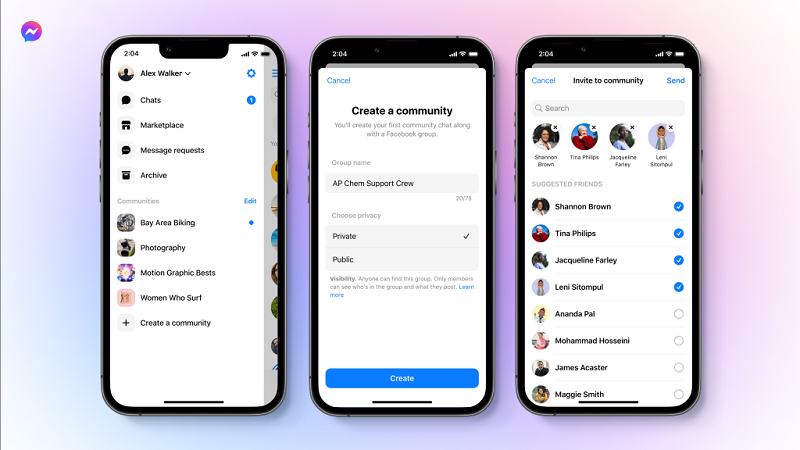 As you can see in these examples, Community Chats, which is being launched today in testing with a limited number of users, will enable people to create a Facebook Group, start chats and audio channels, and invite others to join their new group, all from within Messenger.

“The experience seamlessly blends Messenger and Facebook Groups to allow people to connect when, where and how they want. Admins can now start a conversation about a topic and get in-the-moment responses instead of waiting for people to comment on a post. And, rather than navigating multiple topics in a single Messenger group chat, the person who creates the Community Chat can organize chats into categories so group members can easily find what’s most interesting to them.”

So it’s Facebook Groups, but in Messenger instead, which could encourage more immediate interaction and discussion around your key topics of interest.

If that’s what people actually want. It seems, for the most part, that people would probably prefer to keep both of these elements separate – you drop into Facebook groups to catch up on the latest updates, while your messaging groups are for your closer friends and family. Some group members likely already branch off into Messenger and WhatsApp chats too – but I’m not sure that there’s a need for a direct linking functionality in this respect.

Meta, however, is sure that it can eek out more engagement by tapping into the rising trend of people sharing more within private discussions.

“Most people use feeds to discover content and use messaging for deeper connections. We're building Community Chats as a new way to connect with people who share your interests.”

Friends post a lot more to stories and send a lot more DMs than they post to Feed. If you want to make sure you never miss a feed post from a friend, add them to your favorites and they’ll show up at the top.

Meta is trying to use this as a lever to fundamentally change its approach, migrating users from a feed of content driven by their social graph – i.e. the updates that they’ve explicitly chosen to see in each app by following and Liking people and Pages – to one that’s more based on popular, trending content in related areas.

Which is why your Facebook and IG feeds are now filled with stuff from Pages that you’ve never heard of - Meta’s trying to replicate TikTok’s entertainment-focused content approach, which enables it to highlight the most popular trending content from across the app, not limited by your connections, in order to maximize user time spent.

Meta seems to think that if it can get it right, it can also get people to spend more time in its apps – though early feedback suggests that this is not working, as users feel less aligned to these increasingly unfamiliar content feeds.

Because that’s not what Facebook and Instagram are, they’ve built their apps on personal inputs, and showing you content posted by friends and family. Meta says that people are posting less to the main feed, but it is also worth noting that Meta already has an algorithm in place to sort your feeds because there’s too much to show you, based on your chosen follows.

So maybe, instead of just jamming more stuff in, it could just do away with the algorithm instead?

Meta launched its feed algorithm on Facebook on the basis that people had Liked and followed too many other people and Pages, which meant that there was just too much content that they could be shown each day. So it needed to sort it out, and highlight the best posts – which led to many people missing out on content that they wanted to see, because the algorithm started prioritizing different posts, based on engagement.

But if people aren’t sharing so much to the feed anymore, it doesn’t need feed algorithms then.

Of course, Meta’s not getting rid of its algorithms because the data shows that algorithmic sorting boosts user engagement. Instead, it’s decided to clutter your feeds with more junk, making it harder to see all the posts from profiles that you’ve actually chosen to follow – because Meta thinks that it can show you stuff that you really want to see. Whether you know it or not.

Because that’s what TikTok does – but Meta hasn’t found a winning formula on this front as yet.

But people are still engaging in groups, and in DMs, so now, Meta’s trying to find a way to boost these elements instead, in the hopes of propping up its declining time spent stats.

It won’t work. It’s a dumb idea that adds virtually nothing to the groups or Messenger experience, but Meta’s trying to pitch it as some kind of major upgrade in engagement.

“Admins can start a chat for group members around a specific topic, an event chat for an outing or meetup, a view-only broadcast chat for admins to announce group-wide updates and an admin-only chat to collaborate with admins and moderators. Admins can also create audio channels so group members can share live commentary or receive real-time support.”

You could already do all of this, in various ways, without a direct button, so it’s not really adding anything, other than a means for Meta to hopefully jack up engagement.

In all honesty, this reeks of desperation. Again, Meta’s engagement numbers are in decline, with even Reels, its great hope for negating TikTok, now losing ground.

In some ways, it seems that Zuck’s focus on the metaverse has distracted the company from the now – though really, there’s not much Meta could do about the engagement that it’s losing to TikTok, which is focused on entertainment, not social connection.

By Meta’s own admission, people aren’t using its apps for social connection in the same way that they used to, and if its entertainment that they’re looking for instead, Meta is a long way behind TikTok and YouTube.

For years, Meta’s key market advantage was its social graph – everyone is connected to everyone on Facebook, and Instagram provides another way to keep up to date with friends and family.

If that element is not as engaging as it once was, then Meta loses out. And no amount of re-jigging its approach is going to rectify this.