It’s the dawn of a new era at the company formerly known as Facebook, and to truly establish its evolution into ‘Meta’, CEO Mark Zuckerberg today held an all-staff meeting to announce Meta’s updated values, in line with its new more forward-looking focus.

The company’s value statements have been a key driver of its strategic shifts over time, beginning with the ‘Move Fast and Break Things’ era, which lasted between 2009 to 2014, before being updated to the more placid ‘Move fast with stable infrastructure’. Because breaking things wasn’t necessarily a good thing to be associated with.

Many people scoffed at that, given the role that the platform had reportedly played in the lead-up 2016 US election, but still, that’s the driving, overarching ambition that Meta has since been striving towards. 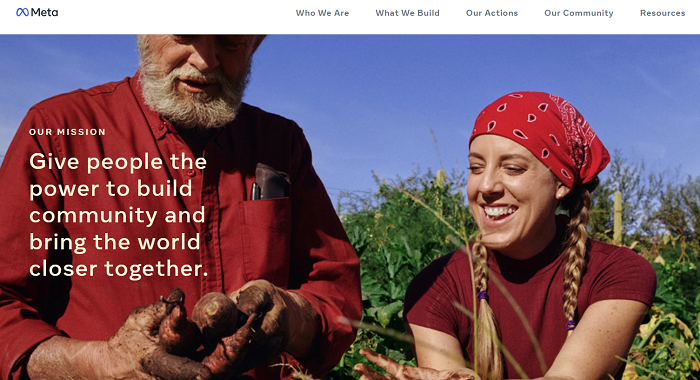 The new directive incorporates elements of all of these past drivers, into one larger collection.

The only omission here is a mention of ‘community’ or ‘building community’, with the focus now more aligned with development once again, as it looks towards the metaverse shift.

Which is still in development, and no one knows for sure exactly how it’s going to come together, at least in a Meta-structured context. Versions of metaverse have existed for some time, most notably in gaming, so there is a broad concept of what a digital world that re-creates real world interaction might look like. But Meta’s vision will look to build on what exists, and bolt in new elements – which makes it hard to tell, at this stage, if and how all of these pieces will come together, and what role Meta will end up playing in the broader structural framework.

As we noted recently, a lot of what Meta has presented as its vision of the metaverse is really just VR, with user avatars engaging in wholly immersive digital spaces.

Which looks great, though Meta’s fully interactive VR world is still a fair way off. But if that is indeed the vision that Meta’s working towards, then it is clearly leading the way, with sales of its Quest 2 VR headsets on the rise, and Meta buying up VR studios and developers in order to dominate the space.

Yet, at the same time, those visions don’t necessarily incorporate AR, for which Meta is developing new wearables and interactive devices, and they don’t extend to other metaverse-aligned developments like cryptocurrency, NFTs, evolved AI and more.

All of these disparate pieces will likely play a part, but what’s most interesting is how Meta’s re-branding has put such focus onto ‘the metaverse’ as a broader concept that every developer in any tech space is now scrambling to add ‘metaverse ready’ to their tools and apps, even though they have no idea what ‘metaverse ready’ actually means.

Which is why the current discussion around Web3 and its related elements is still too early, because who knows how it’s all going to fit. Each element will be its own thing, and each should be explored in its own time and space. And by referring to things as metaverse-aligned, all you’re really doing is playing into the narrative that Meta will own the Metaverse.

Which is likely what Zuck and Co. want, but it is interesting to note the massive market influence the company now has, and to see how that plays out in positioning it for the next shift.

Which brings us back to Meta’s new values, and its re-alignment around ‘moving fast’ as it advances towards the next stage.

Really, that’s where we’re at – we’ve returned to the Facebook of old in some ways, with the push now on to develop new experiences, and beat out the competition, in order to establish a platform, which, once it’s in place, will then see Meta’s focus re-shift back to community and social good, which Facebook eventually pivoted towards once it was big enough.

But at the same time, it also pivoted too late. Facebook became more conscious of the negative impact of its apps once they’d been built, through moving fast, which is when it then moved to ‘bringing the world closer together’ and focusing on improving community engagement.

Is that what will happen in the metaverse as well? Will this new mission overview see Meta focusing more on ‘moving fast’ and ‘building awesome things’, while neglecting the potential negatives, and the societal harms that could also come as a result?

I guess that’s what the ‘focus on long term impact’ note is there to counter, to give developers increased impetus to build with sustainability, and ideally safety, in mind.

But I don’t know. It does seem like accelerated product development, and moving towards the future, is the key push here.

There’s also ‘Be Open’, which I’d be willing to bet Meta will lean on as its commitment to building its infrastructure in partnership with others. But in reality, I suspect it will actually be interpreted internally as building systems that others can also build for, which will eventually see Meta playing host to the foundations of the metaverse, as it sees it.

For all its talk about ‘no one company’ owning the metaverse, it increasingly seems like one company will do just that.

And a final note. Meta employees will now be referred to internally as ‘Metamates’.

Meta CTO Andrew Bosworth confirmed this, and provided some context on the terminology:

Fun fact: Metamates was coined by none other than Douglas Hofstadter himself after an employee cold emailed him for ideas after our rebrand. I love it!

Also the saying is a reference to a Naval phrase which Instagram has used for a while "Ship, Shipmates, Self"

I might it can’t be worse than ‘Nooglers’, which someone also must have once thought was incredibly clever and witty.