Meta Shares New Insights into the Coming Metaverse Shift, and What Exactly Needs to Happen to Facilitate it

What are the true opportunities of the metaverse and more immersive digital environments, and more specifically for marketers, how will it change the way people shop, engage with brands, and advertising approaches?

That’s the focus of a new whitepaper from Analysis Group, in partnership with Meta, which seeks to provide a realistic perspective on where things are headed with the metaverse shift – which may or may not become a tangible, valuable reality for another decade yet.

But it is, according to Meta at least, coming, and that will open up new opportunities.

First off, the whitepaper seeks to define what, exactly, the metaverse is – an important element considering the amount of profiteering businesses that have cropped up with their ‘metaverse ready’ solutions.

As per the paper:

“One way to think about the metaverse is as a set of interconnected digital spaces, including immersive XR experiences that combine the digital and physical words, in which individuals can easily move between different spaces and experiences as well as interact and collaborate with other people who are not in the same physical space.”

I mean, that seems pretty straightforward, and in line with the broader definition of the metaverse experience, as we’ve been shown in various promotional mock-ups from Zuck and Co.

But the practicalities of that are also important – how will we actually get there, and crucially, how far off is the next stage of connection?

The answer on that front is that it will take time – and Analysis Group is careful to note that it might never happen:

“It is possible that, like many other previously “hyped” technological innovations, the metaverse never comes to fruition as it is currently envisioned.”

But in order to become the platform of the future, it will need mass adoption, which means broader take-up of VR headsets, the roll out of AR glasses, and other technologies.

“As with the Internet and other technologies, the form and shape of the metaverse will materialize slowly at first, and only after a critical mass of adoption is achieved, will its full potential begin to take more concrete shape.”

So it’s not here yet, and it’s not coming for some time. So you don’t need to go ‘all in’ on your metaverse strategy, and you shouldn’t feel obligated to jump on the NFT train at present.

It will take time, meaning you have time, which, as Meta’s Nick Clegg additionally notes, also means that regulators have time and space to institute new rules and frameworks for the evolving space.

“As has been the case throughout the internet’s development, interoperable standards and protocols will be developed by different people and companies over time, and will often be settled by institutions like the US-based National Institute of Standards and Technology or international multi-stakeholder organizations like the Internet Engineering Task Force or the World Wide Web Consortium.”

In his essay, Clegg builds on the Analysis Group whitepaper with a call for governments to work together on building a regulatory approach for the evolving space.

“A metaverse that is open and interconnected is not only the right thing for users — and something that will involve both technical and policy work from industry and regulators — it is also the sort of thing that might come to distinguish the metaverse in the parts of the world that still believe in an open internet from the metaverses built in other parts of the world where a closed internet has been constructed in recent years.”

Clegg notes that a ‘constellation of technologies, platforms, and products’ will be required to work together to build the metaverse space, and that will likely need some level of external oversight – because while Meta would love to own the metaverse for itself, it also knows from experience that it doesn’t want to be the one setting the rules in the new space.

Acting now, Clegg says, is key to ensure that we’re prepared for the next shift. Because again, as detailed in the AG report, we’re still developing the building blocks of the next phase. 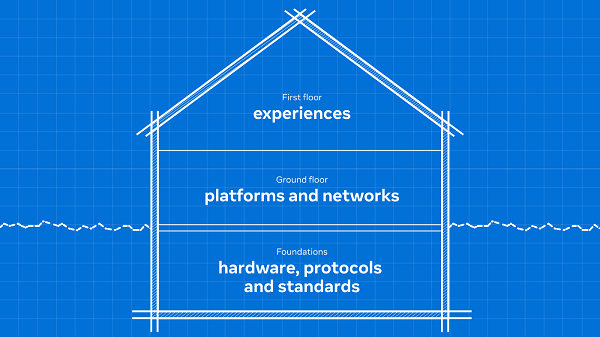 This is important to note, because while people are jumping on board new trends like NFTs, with a view to the future, the fact is that we don’t know what role these kinds of elements will play in the coming metaverse shift.

It’s also hard to take anything definitive from the AG report on potential value - because as it notes, it’s not in a position to speculate whether the metaverse will succeed, it’s merely mapping out its potential based on past technological advances. But with this comparison in mind, if the metaverse were to grow in the same way as mobile technology developed, it could become a $3.01 trillion industry by 2031.

There’s a lot to factor in here, and a lot that needs to go right. For example, the AG report notes that various platforms will need to work together to make the metaverse work.

“For example, a user is required to have an individual account to access a social media app such as Twitter or TikTok and an individual account to access a gaming console such as Xbox or PlayStation. But in the metaverse a user would be empowered to consume digital goods and services seamlessly. Time Magazine’s Andrew Chow supports this vision and writes, “Instead of having separate Facebook and Twitter accounts in which everything you post is owned by those corporations, you will be able to own your digital personhood and all of your ideas and digital belongings wherever you go.” For example, an individual could purchase a digital piece of clothing or accessory from a platform and still “wear” it when they visit another platform, as opposed to that digital good being restricted for usage within the platform from which the individual initially purchased it.”

That’s would be an amazing advance, and it is possible, but Meta’s essentially calling on regulators to establish new rules and systems now to ease this into existence. Because the platforms themselves will have little motivation to integrate in this way, unless they either have to, or the financial benefits of doing so are too much to ignore.

Meta seems to be angling its push towards the former, establishing new rules, governing all metaverse partners, in order to avoid any commercial conflicts or rule-setting by certain platforms. Meta has been highly critical of Apple’s restrictions on iOS apps, which is a similar problem it's pointing to here – if regulations are not built into the framework of the metaverse right now, it will become increasingly difficult to enforce any rules once any system, and its accepted norms, is in place.

So essentially, the metaverse is still a long way off, and a lot needs to happen to make it the universal, interoperable, virtual reality alternative that Meta envisions.

In other words, don’t get too far ahead of yourself on the metaverse just yet, and don’t throw your money away on the latest trends. Assess each as it arrives, consider its fit for your business. But don’t believe anyone who tries to sell you on the metaverse being already here, and already ready to go for brands.

You can read the full Analysis Group whitepaper here, and Nick Clegg’s long Medium essay on the metaverse shift here.