If you’re looking to reach local markets, this could be interesting – today, neighborhood app Nextdoor has announced the launch of its expanded self-serve ads platform, which will provide direct capacity for more SMBs to reach its audience with in-app promotions. 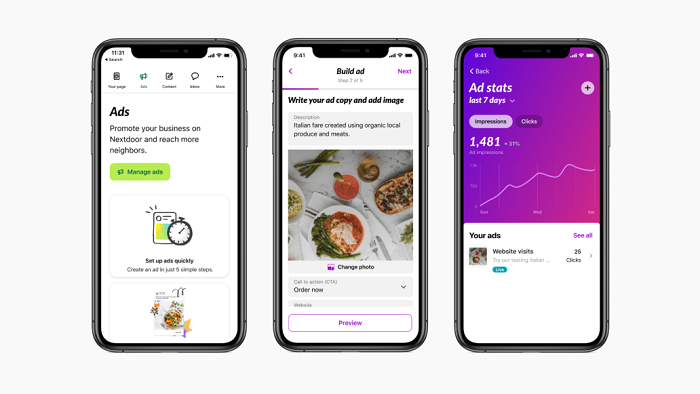 As explained by Nextdoor:

“Nextdoor Ads is an easy-to-use expansion of Nextdoor’s proprietary self-serve campaign management platform, designed to help small and medium-sized businesses (SMBs) advertise on Nextdoor. By providing a guided experience for creating and managing effective ads on Nextdoor, Nextdoor Ads empowers SMBs to build stronger brands with local audiences, turn neighbors into customers, and grow their business through advertising on the neighborhood network.”

To be clear, Nextdoor has offered various ad options for some time, but this new platform is designed to make it easier than ever for businesses to log-in, create and launch a Nextdoor ad campaign, including simplified creation and performance stats, all in one place.

But is it worth adding Nextdoor into your digital marketing mix?

Well, like most things in social media marketing, it depends.

Nextdoor claims that almost 1 in 3 US households have a presence in the app, and most of its users are also increasingly keen to support local businesses.

“Pre-pandemic, 88% of [Nextdoor users] frequented a local business at least once a week. Now, 72% of U.S. adults are making it more of a priority to support local businesses compared to before the pandemic. Nextdoor users also love to spread the word - they’ve already shared over 55 million local business recommendations on the Nextdoor platform.”

Overall, Nextdoor has over 69 million global users - so while it’s not Facebook or Instagram, it does have a sizeable audience reach to localized, engaged communities. And as Nextdoor notes, amid the pandemic, it has seen a resurgence, as more people have been seeking to connect with and support those in their local area.

It could be worth considering, or at least checking out the Nextdoor app to see what’s being discussed.

Nextdoor’s update ads platform is slated to fully launch in the US in the coming weeks. Users will need to sign up for a business account to launch a Nextdoor campaign.