With eCommerce on the rise amid the COVID-19 pandemic, Pinterest has continued to add users, and boost revenue, as reflected in its Q3 2020 performance update.

First off, on users - Pinterest added 26 million more actives in Q3, taking it to a new high of 442 million MAU. 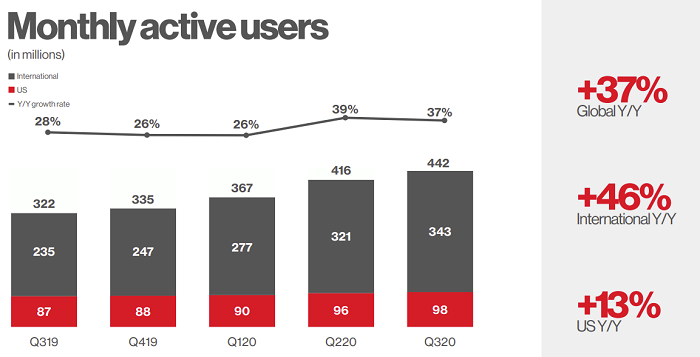 As you can see here, that's a slight slowdown in user growth momentum, but the platform's year over year growth rate is still better than the same at Facebook, Snapchat and Twitter.

As noted, Pinterest has seen significant benefit from users looking to replicate the in-store shopping experience as best they can online, with the platform functioning as a sort of virtual shopping mall of artisan products.

"MAU growth was strong in both the US and international markets, driven primarily by COVID lockdowns in many regions. Particular strength came from users under the age of 25, a trend that we’ve seen for several quarters. People who began using Pinterest during COVID-19 continued to have high levels of engagement in Q3. In fact, users in the COVID-19 cohort had higher retention and higher engagement (defined as impressions, closeups and saves) than a cohort of new users during the same period last year."

That's a good result for the platform, but how sustainable that growth is, after the lockdowns are lifted, will be a question.

For its part, Pinterest has warned that the US Election could slow down user growth, while the impacts of the lockdowns are relative:

"We’ve learned more about the users who began using Pinterest during the COVID-19 period. First, their engagement tends to increase when lockdown orders are in effect and wane when the orders are lifted. Second, they typically come to Pinterest for a specific purpose (e.g., building a home office) rather than for general inspiration."

That could mean that as we move beyond the pandemic, Pinterest will see a period of stagnant usage growth, but it's too early to predict with any accuracy as yet.

On the revenue side, Pinterest had a particularly strong quarter, up  58% year over year. 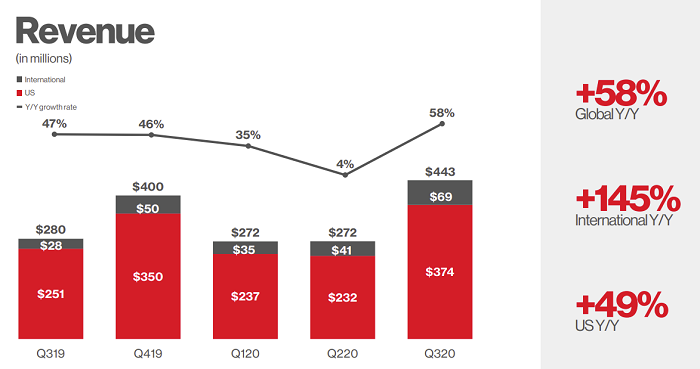 The platform says that it saw a resurgence in ad demand from large brand advertisers in the period, along with an 'acceleration of strong demand from mid-sized and small advertisers seeking conversions'.

"During Q3, revenue from both conversion optimization (oCPM) and shopping ads continued to grow much faster than our overall revenue. Pinterest also continued to provide a positive platform for businesses to build their brands and drive sales."

That last point is particularly interesting, as is this addition:

"Spend from the group of advertisers boycotting social media accelerated in Q3, though it’s not yet clear how sustainable this trend will be, particularly after the U.S. presidential election cycle ends."

With Facebook advertisers pausing ad spend in July in protest over the platform's lack of action on hate speech, many, apparently, switched that spend to Pinterest instead, likely as an experiment to see what type of results the platform can provide. Their ongoing spend, then, will relate to the results they saw, which is why Pinterest is hesitant to predict that they'll stick around, as comparable response rates may be better on Facebook.

A more solid indicator is Pinterest's growth in international markets, where it saw a good jump in ARPU. 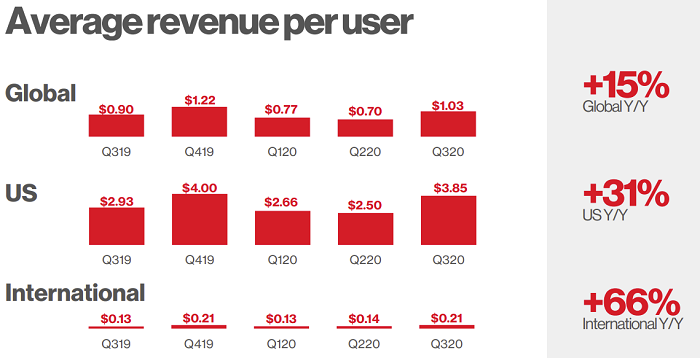 As noted, the US rate may be more variable, and will likely come back down in future reports (maybe not Q4, but as lockdowns are further lifted across the world). But the international ARPU numbers are promising, showing new opportunities for the platform.

"Investments to build out our international ads business have also continued to diversify our advertiser base, particularly in Western Europe, where we hired sales teams in the fall of 2019. The diversification of our advertiser base driven by technology and sales investment matters because it improves our ability to serve contextually relevant ads against growing search engagement."

If Pinterest can replicate anywhere near the same as its US performance in other regions, that could give it a big boost.

And worth noting, Pinterest's US ARPU ($3.85) is higher than Snapchat's ($3.40), with similar International figures. That suggests that both have significant opportunity to maximize their earnings yet, with Pinterest possibly holding even more potential value in this respect.

Overall, it's another good result for Pinterest, but the company is being very cautious in pinning too much expectation for future growth on figures likely driven by people having more time to search during the pandemic. That could suggest that Pinterest will see a dip in future, but its advancing tools, and especially its in-stream shopping options, could help it maintain its audience, and continue to grow. 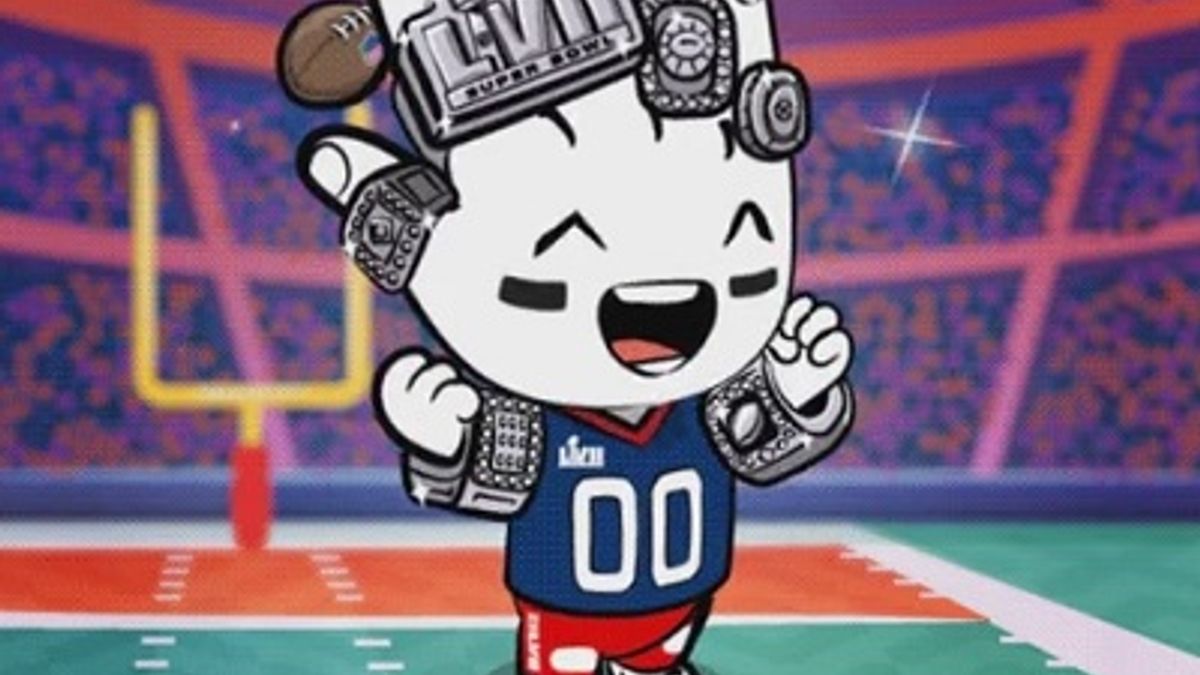