With the US midterms fast approaching, Pinterest has outlined its latest measures to combat political misinformation via Pins.

Which may seem like a lesser consideration. The visual style of Pinterest, and its Pins, probably doesn’t immediately spark thoughts of potential political manipulation. But as with all platforms, Pinterest has been the target of coordinated manipulation in the past, and as such, it’s important that it too takes steps to address the spread where it can.

Pinterest, it’s also worth noting, has 433 million active users, a huge audience, which will no doubt attract those seeking to influence political opinion, if they can.

First off, Pinterest is rolling out a new search advisory message for query terms that could be related to elections or voting. 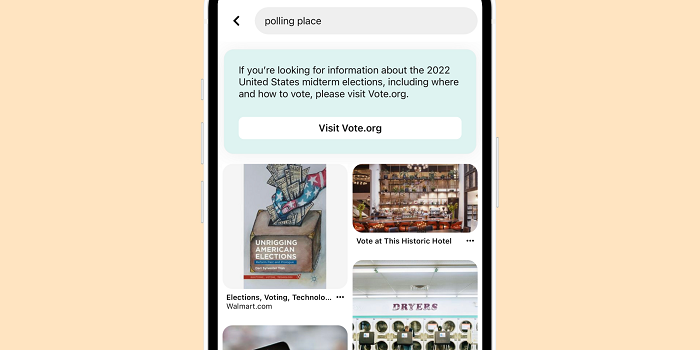 As you can see in this example, Pinterest will show a pop-up notifier on related searches which will refer users to Vote.org for more information.

These types of prompts are only small steps in the broader scheme, but even minimal nudges like this can be effective in guiding users towards more reputable, official sources.

Pinterest says that it’s also working with network analysis group Graphika to detect and remove potentially misleading political content, while it’s also working to enforce its community guidelines around false or misleading content ‘that impedes an election’s integrity or an individual's or group's civic participation’. This includes information on registering to vote, voting, or being counted in a census.

“Additionally, during election seasons, we will not monetize election-related content. That means for the months surrounding the midterms we won’t show any ads when you search for common election-related search terms like candidate names, “vote,” and “election campaigns.”

Pinterest was one of the first social platforms to ban political advertising, taking an official stance on such in 2018, after the controversy surrounding the 2016 US Presidential Election. Pinterest has since expanded this to include election issue ads, while it also banned all climate change denial content earlier this year.

Which, it probably is easier for a platform like Pinterest to do, as opposed to Twitter or Facebook which both focus on more broad discussion around trending topics. But even so, it is worth noting Pinterest’s efforts on this front, which are another part of the broader push to combat misinformation across social networks.