Last month, Facebook launched a wide-scale attack against Apple's coming IDFA changes, which will provide app users with more explicit information about data tracking by each app, and enable them to opt-out of such, if they choose.

Now, a new report has suggested there may be good reason for Facebook's opposition - according to data from MKM Partners, Facebook, along with Snapchat, stands to suffer the most impact from the IDFA update, with many users expected to opt-out of their data tracking due to the amount of insights that both companies take in.

IDFA enables app owners to track individual user data within apps, including actions taken within the app, device info, acquisition insights, etc. Right now,  iOS users can opt-out of IDFA tracking, but the settings are not readily accessible, and require some digging to find. The update to iOS 14 will make IDFA explicitly opt-in, with a new pop-up prompt when you open each app.

According to MKM's analysis, which looked at total user numbers, first-party data access and relative revenue contribution from various types of ads (which utilize different types of data tracking), Facebook and Snapchat are likely to see the biggest impact from users opting out via these new prompts. MKM says that Twitter and Pinterest will also see impacts, though to a lesser degree, with Google and Amazon at the bottom tier of exposure among the big tech players. MKM also notes that many other ad providers outside of the large players will also see reduced effectiveness as a result of the change.

What the full impacts will be is difficult to say, but according to CNBC, Bank of America analysts have also predicted that both Facebook and Snap will be hurt the most, potentially seeing a 3%-5% revenue headwind as a result of the IDFA update. Like MKM, BoA has also predicted that other platforms will be less exposed to the change.

Of course, this is all speculation based on estimates around how many people will actually opt-out of data tracking, but the projection is that when users are faced with a warning like this: 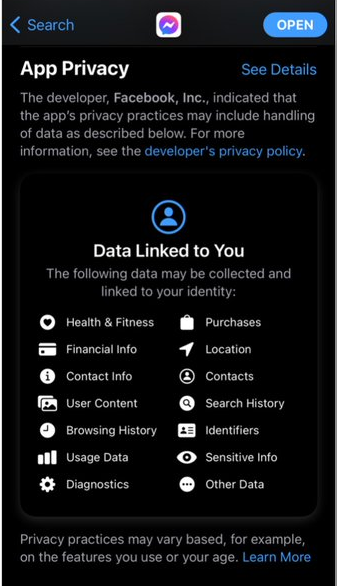 That will spook many into tapping on 'Ask App Not to Track'.

Facebook's counter-argument against the IDFA update is based around the suggestion that seeing more people opt-out, and having less data available to advertisers, SMBs, in particular, will be impacted because they won't be able to hone in their ad targeting, thereby increasing ad effectiveness while concurrently reducing costs.

Which is likely true, but Apple's stance is that people should have the opportunity to control how their data is used, which, given broader shifts in approaches to personal data tracking, is more in line with wider industry and regulatory movements towards increased transparency.

In Europe, for example, the GDPR, which was introduced in 2018, more explicitly regulates how people's personal data can be used, providing more transparency and control to users of digital platforms. The GDPR was the first of many regulatory shifts towards data protection, and in more recent times, we've seen significant pushes against platforms taking in data from underage users, or transferring personal data on citizens back to other countries.

Given the broader context, Apple's IDFA changes make a lot of sense. But there will inevitably be impacts.

How this will change your approach to Facebook advertising is also impossible to say until we see how many people opt-out, but the debate alone will likely see more businesses shift to first-party data tracking approaches, in order to negate any reduction in ad targeting capacity as a result of the new warnings.

Either way, it looks set to be a key issue in 2021, with much more to play out before the full extent of the change is known.

Apple has not officially confirmed with the IDFA changes will come into effect.