Snapchat has announced a new integration with Spotify, which will enable users to share playable Spotify tracks via stickers within their Snaps. 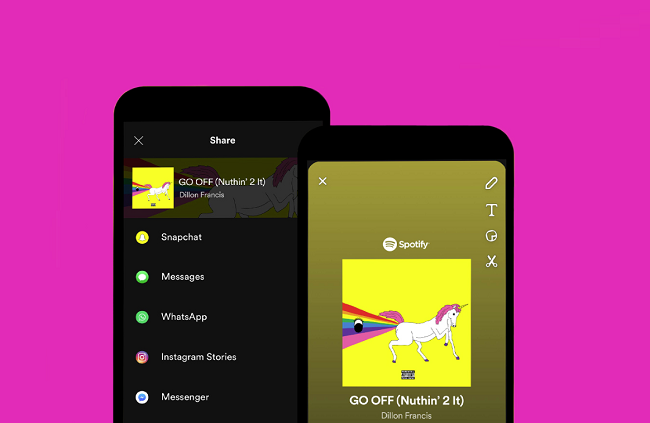 As explained by Spotify:

"With Spotify, you can listen to your favorite music and podcasts anytime, anywhere. With Snapchat, you can share what you’re up to instantaneously. Soon you’ll be able to combine the two seamlessly and share what you’re listening to in a Snap [story]."

The process of sharing a Spotify track to your Snap is fairly easy:

At present, Snap doesn't have a music sticker option, as Instagram and Facebook Stories do, which would make it easier to share Spotify tracks direct from Snap, but through this option, you can still create the same effect, just originating from Spotify, as opposed to the other way around.​

You can also emulate the same, to some degree, via Snap's integration with Shazam - you can use Shazam to identify a track you have playing, then send that sticker via Snap. Snap also has an integration with Tunemoji to send music GIFs.

The Snap/Spotify link was first spotted in testing by reverse engineering expert Jane Manchun Wong last year, so it's been in testing for some time:

As noted, users have been able to share Spotify tracks on Facebook and Instagram for some time (including on your Facebook profile), so essentially, Snapchat's playing catch up here. And it makes sense for them to do so - there are a range of hacks and workarounds that people already use to add Spotify-originated music to their Snaps.

You would expect Snap to solidify this further with a dedicated music sticker in Snaps sometime soon.