While Facebook has focused on global domination, and connecting as many people as possible through its family of apps, Snapchat has always maintained its focus on close relationships, which has long been its differentiating factor - its 'anti-Facebook' approach, as many have called it.

Snapchat was never designed for public broadcast, for sharing every moment with everyone. Instead, Snap was made to help people stay in touch with their closest connections, in a more intimate, and less permanent, way. That, in many ways, likely limits Snapchat's broader growth capacity, but as overall social media trends have shifted away from public sharing, with private groups and messaging now on the rise, Snap has also benefited in many ways from being ahead of the trend.

And now, Snap is using that ethos as the key focus for its first global, paid media campaign, which will see Snap billboards and ads placed in across cinema, broadcast, print and digital platforms.

As you can see, Snap's 'Real Friends' promotion will highlight the stories of Snap users who have been able to connect through the app, building their relationship through closer connection, as opposed to some of the negative aspects connected to public sharing.

"The “Real friends” campaign is designed to elevate the power of friendship, and celebrate Snapchat as the best platform for communication and self-expression with your real friends through the voice of Snapchatters and luminaries."

The campaign will highlight the individual stories of friends, which Snap selected from 12 different countries. People will be able to view each individual story in short videos posted to Snap's YouTube channel. 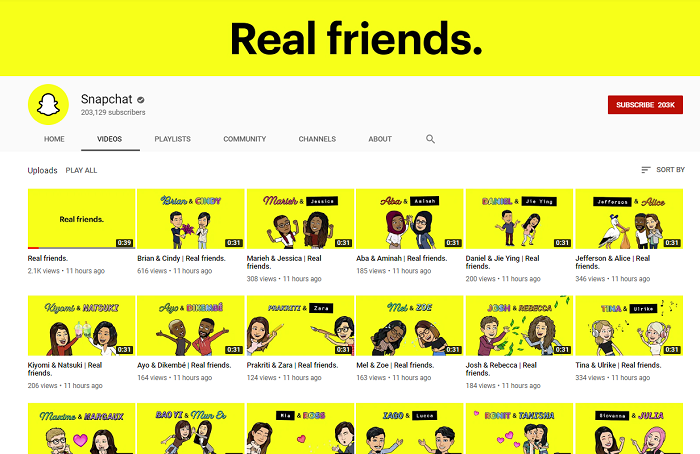 In addition, Snap will also use quotes on friendship "from 15 luminaries and famous figures", which will be showcased on billboards as part of the campaign. 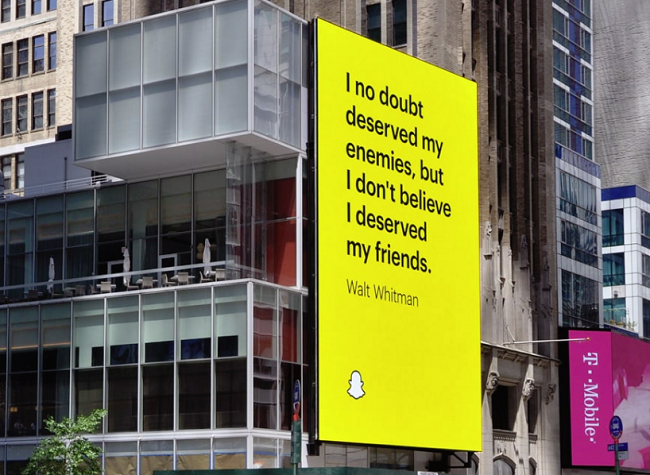 The push will look to further promote Snap's capacity to help keep users connected to those friendships that truly matter.

"When we launched Snapchat more than seven years ago, it wasn’t about capturing the traditional Kodak moment, or trying to look pretty or perfect. We wanted to create a way for our friends to express themselves and share however they felt in the moment."

Note the jab at Instagram here. And while Instagram has continued to expand - in no small part thanks to re-purposing one of Snapchat's core features - Snap's defined focus on friendships, and connecting people around smaller, more meaningful moments, has helped it build an engaged, dedicated audience, which could see a significant increase with this new push.

Indeed, amid privacy scandals on Facebook, Snap may have picked the right time to highlight why its app is different. Snapchat added 13 million more daily users in the most recent quarter, with many of them believed to have come across due to the popularity of Snap's baby and gender-swap Lenses. If Snapchat can hold onto those gains, and add to them by showing why people might want to use the app, that could help build it usage, and gather up those people who are growing increasingly concerned about Facebook's privacy approach, and the misuse of the platform by political activist groups.

Of course, Snapchat could theoretically be misused too, but the way that Snap is structured makes dedicated political ad targeting more complicated, while, again, the focus on more intimate communication, as opposed to public broadcasting, limits some of the potential negatives.

It'll be interesting to see what the results of the campaign are, and whether it helps broaden Snap's horizons, especially in regions outside of North America, where Snap truly needs to grow.