This could help provide more context for your Snapchat marketing approach.

Last month, Snapchat shared its Q2 performance numbers, in which it reported a 17% year-on-year increase in daily active users to 238 million. 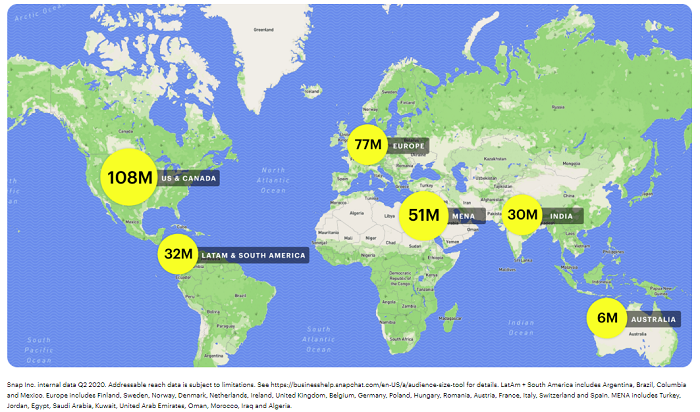 That's interesting, as it gives you a much clearer view as to how popular the app is in each region - and more specifically, with your target audience.

But there is a problem - by my math, the total figure of these numbers adds up to 304 million, which is significantly higher than Snap's 238 million DAU base.

Snapchat has explained to SMT that the figures listed on the above map represent 'addressable reach', not active users.

"Addressable Reach, approximates the number of Snapchatters your Ad could potentially reach over 28 days. It is based on recent data for your selected targeting criteria and placements, so it may not be predictive for your combination of flight dates, budget, and optimization strategy. [Addressible Reach] size is not the same as monthly active users. It may vary due to performance and seasonality."

So it's more like monthly users, but also not, because it incorporates variable data like people travelling, users with multiple accounts, etc. Of course, no one's really travelling at the moment, so the numbers here are probably more representative than normal - and as such, they're probably the closest you'll get to MAU counts from Snap, without being exactly that.

In addition to this, Snapchat has also included regional charts for unique reach based on social apps - i.e. "the percentage of Snapchatters who do not use the other platform in a given week". 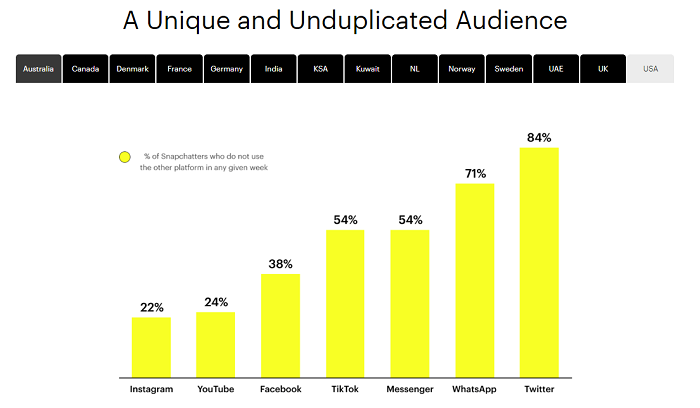 So, if you were looking to reach younger audiences, as you can see here, the cross over between TikTok and Snapchat usage may not be as high as you'd expect, while you'd be missing some audience sections almost entirely if you only advertised on Twitter or Snap. You can also break these figures down by region to get more understanding about your target market.

The charts provide more context for your digital marketing planning, and could give you a better understanding of where to focus your efforts in order to maximize reach and resonance. Based on this, you can get a clearer view as to your potential audience on Snap - but also, where else you may, or may not, be able to reach them.

As noted, the charts are included as part of the Snap Focus course on audience reach - Snap Focus is Snapchat's platform education program, which it launched back in June. And given this data, it may well be worth taking the courses yourself to improve your understanding of relevant opportunities in the app.

You can get started on the free Snap Focus education courses here.