Snapchat's Redesign Criticism Continues, and May Have Broader Scale Impacts

How important are influencers on Snapchat?

For a long time, Snap Inc. had largely ignored platform influencers, saying that the app was ‘for friends’ and that prominent users should be treated just like everyone else. That approach has shifted more recently, with Snap seemingly realizing the value of popular users and giving them more focus, both via their verification program and within the new, redesigned app.

And this week, we saw just how important those influencers can be in deciding the app’s fate.

According to The Verge, a single tweet from Kylie Jenner, which criticised the app’s latest redesign, wiped $1.5 billion in market value from the company’s stock.

On Wednesday, Jenner tweeted this:

Immediately following Jenner’s tweet, Snap Inc. stock started to fall, and went down by 6%. Of course, it’s difficult to categorically attribute the entire loss to a single mention (BuzzFeed reports that the drop is linked to criticism of the redesign more broadly), but the data does stack up - and there’s little denying that a significant amount of Snapchat’s appeal lies in the app’s cool factor, which is inevitably going to take a hit if and when popular celebrities turn away from it.

Jenner’s tweet is just the latest in the ongoing criticism of the app’s redeigned layout. Many users have called on Snap to revert to their original format, with the change.org petition calling for Snap to reverse the update now surpassing 1.2 million digital signatures. (NOTE: Snapchat responded to the petition here)

Snap CEO Evan Spiegel has responded to the backlash, saying that the redesign is here to stay – which makes sense, as it gives the app more scope to boost both influencer and advertiser appeal. But it’ll be interesting to see whether the redesign actually impacts user numbers – Snap’s most recent performance report was their best to date, and included them adding an extra 9 million daily active users. 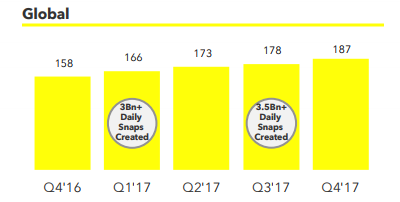 Will those users stick around – especially if prominent users like Jenner turn their interests elsewhere?

In some ways, the potential impact of Jenner’s tweet highlights both the app’s greatest strength and biggest weakness. Snap is hugely popular among younger users, but those users are more attuned to following trends – trends that can change focus quickly. That likely doesn’t diminish the app’s appeal for those marketers looking to connect with their audience, but it does raise questions about the long-term viability of Snap, with a lot riding on them continuing to get things right.

Then again, they’ve been able to do so thus far – maybe this, then, is more of a justification as to why Spiegel retains such tight personal control over any changes within the app.

Also, worth noting that Jenner did try to walk back her criticism the next day:

still love you tho snap ... my first love

It’ll be interesting to see how the redesign continues to play out.

NOTE: Also worth adding for context (and probably more likely to be contributing to Snap's stock woes), some brands have reported significant reductions in Snapchat exposure since the redesign, highlighted by Maybelline New York tweeting this: 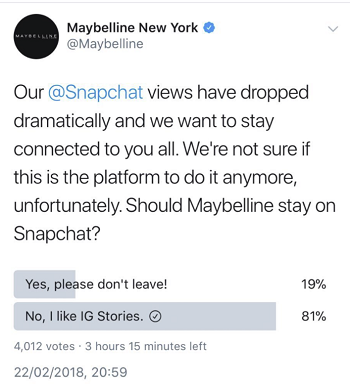 It's since been deleted - and like Jenner, it's only one brand. But each could represent more significant concerns.