TikTok's looking to do its part to reduce the spread of misinformation by adding new warning labels to clips which have been found to include unsubstantiated - but not definitively untrue - claims. 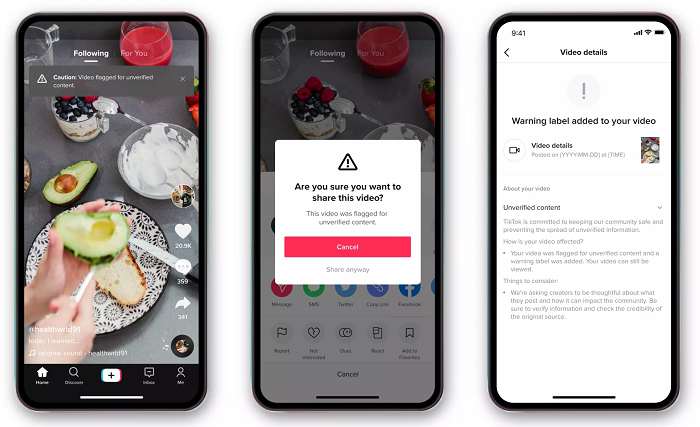 "We remove misinformation as we identify it and partner with fact checkers at PolitiFact, Lead Stories, and SciVerify to help us assess the accuracy of content. If fact checks confirm content to be false, we'll remove the video from our platform. But sometimes fact checks are inconclusive or content is not able to be confirmed, especially during unfolding events. In these cases, a video may become ineligible for recommendation into anyone's For You feed to limit the spread of potentially misleading information. Today, we're taking that a step further to inform viewers when we identify a video with unsubstantiated content in an effort to reduce sharing."

So, as opposed to confirmed false claims, which would be removed entirely, the new labels will warn users when a video includes claims that have been flagged as a concern, but don't officially cross the line as yet.

As you can see in the example screenshots above, when such claims are detected, TikTok will now alert viewers with a gray warning prompt at the top of the clip. If a user attempts to share said clip, they’ll see a new alert prompt to remind them that the video has been flagged for unverified content. Users will also be notified when a warning label has been added to their clip.

"This additional step requires a pause for people to consider their next move before they choose to "cancel" or "share anyway."

It's somewhat similar to the approach Twitter has taken in adding prompts when users go to retweet something that they haven't actually read, which it added in June last year.

That additional friction has proven effective - Twitter says that users open articles 40% more often when shown these alerts, ensuring that more people have a better understanding of the full context of what they're looking to share, before they contribute to its amplification.

TikTok will be hoping for the same - and while it may not be a key focus in the battle against the spread of online misinformation, TikTok has, most definitely, been used to help spread problematic messages over time. And as the app continues to grow (projections are that TikTok will reach a billion users in 2021), so too does its influence, and its capacity to prompt user action. That will no doubt make it more of a target for misinformation campaigns moving forward.

Given this, this is an important, and valuable update for TikTok, which will have some impact in scaling back the velocity of such claims, and reducing their reach.

And really, anything that can be done on this front is a positive - and even users disagree with the prompts, they'll still be able to share the clip, if they feel passionately about such.

But that moment of pause, and consideration, could prove critical in the ongoing battle against false reports.

TikTok says that the new prompts will be rolling out globally over the coming weeks, starting today in the US and Canada.