After working on the details for several months, TikTok has today announced a new licensing deal with Sony Music Entertainment, which will enable creators to include a range of popular songs in their TikTok clips.

"With this deal, the TikTok creator community will have access to sound clips from Sony Music’s massive catalog of current hits, cutting edge new releases, emerging favorites, iconic classics and deep cuts from every genre of music for use in their TikTok content. TikTok and Sony Music will work together to support greater levels of TikTok user personalization and creativity on the platform, and drive new and forward-looking opportunities for fan engagement with SME’s artists and music."

Of course, TikTok users have always been able to use music from a range of artists in their videos, but this agreement solidifies TikTok's offering, ensuring that there are no potential concerns around misuse, while also providing a cut of music usage to Sony Music.

Like all social platforms, TikTok has been working to secure music licensing agreements to keep everything above board. Back in January, the platform also signed an agreement with Merlin, an agency which represents a range of independent music labels and artists.

Given that TikTok has become a springboard for several musicians in reaching a wider audience, it makes sense for both parties to come to an agreement, while the recent viral success of a clip from user 'Doggface', in which he rode his skateboard to a soundtrack from Fleetwood Mac, further underlined the platform's connection to the music industry.

That single clip saw Fleetwood Mac's 1977 album 'Rumors' return to the top 10 on the Billboard chart, and while Fleetwood Mac's back catalog is not owned by Sony, you can see the beneficial value for both parties.

But despite the new deal, there are still restrictions around brand use of music.

Back in May, TikTok updated its rules around commercial usage of popular music, which has stopped verified brands from using popular tracks in their clips. Brands, instead, are referred to TikTok's royalty-free 'Commercial Music Library' of sounds, which are available free for business use. 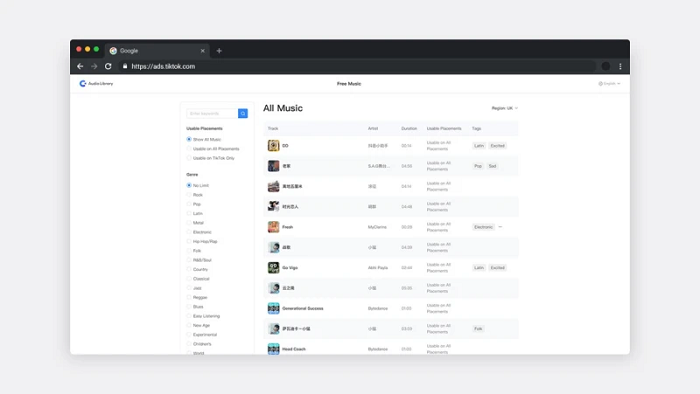 TikTok, of course, doesn't have business accounts, but it does have a system in place to identify brand profiles, which it then stops from using commercial tracks:

"When your account has been identified as a promotional or official brand account, you will only be able to use tracks from the Commercial Music Library. This is to avoid issues that arise from using copyrighted material for promotional purposes."

It seems, at this stage at least, that those restrictions will remain, despite the new Sony deal. Which makes sense, but is worth noting for broader context.

Still, even so, with TikTok increasingly looking like it will continue to grow, and continue to operate in the US, such deals will play an important role in keeping everything on track, and maintaining connection with the music industry.