This seems like a somewhat uncomfortable partnership announcement, especially given more recent investigations into TikTok in Europe.

But then again, it also makes sense on some level too - today, TikTok has announced a new partnership with UFC which will see the sports broadcaster publish a range of exclusive content within the app.

"Today we're excited to announce a multi-year partnership with UFC, the world’s premier mixed martial arts organization, to deliver exclusive live-stream content for UFC fans on TikTok around the world. The weekly live-streams will feature pre-and post-fight access, behind-the-scenes footage and engagement with UFC athletes, and other exclusive content executions for TikTok."

That will like bring a lot more UFC fans to the app, while the UFC TikTok account already has over 6.3 million followers, making it the third most-followed sports league on the platform. 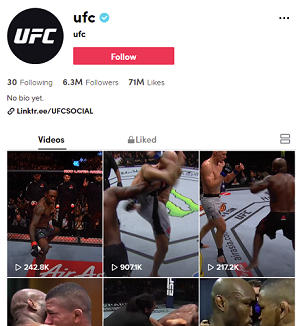 Given the sport's popularity among TikTok's audience, the partnership does make sense - but as noted, increasing the amount of violent content on the platform also seems like poor timing, given the app's more recent investigations in Italy.

Last month, Italian authorities temporarily blocked access to TikTok for users whose age could not be proven definitively, following claims that a 10 year-old girl had died after taking part in a “blackout challenge” in the app. The challenge sees users choking themselves in their clips.

The European Commission is also investigating further claims that TikTok exposes young users to inappropriate content - and within this environment, adding even more footage of people beating the heck out of each other seems like not the ideal timing, at the least.

But UFC is also a legitimate sport, with millions of fans around the world, and the partnership will add more unique, popular content to the platform. It just has a way to go in ensuring younger audiences are restricted from such - but for marketers who are looking to reach the UFC crowd, this could definitely be worthy of note.

The new UFC and TikTok partnership will begin this week with content created around UFC Fight Night: Blaydes vs Lewis on Saturday, February 20th.