Is TikTok part of your digital marketing plans for 2020?

Maybe it should be - according to the latest update from Sensor Tower, TikTok was the most downloaded app on both iOS and Android in September. 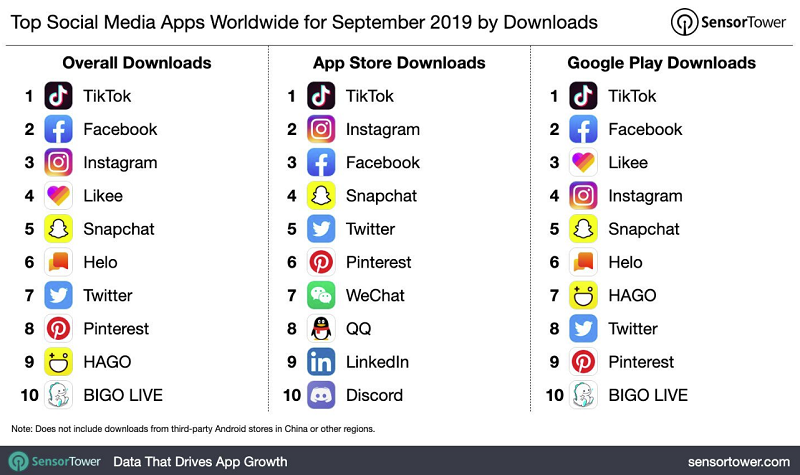 "TikTok was the most downloaded social media app worldwide for September 2019 with close to 60 million installs. The countries with the most installs of the app during this period were India at 44% of its total downloads and the United States at 8%."

The app's growth in India - the world's second-most populous nation - is significant, and could help fuel ongoing growth. That would also provide advertiser appeal, and help it build its business - however, while the numbers here point to TikTok holding its place, and becoming a key social platform for consideration, some concerns about the app do remain.

First off, Sensor Tower's data is based on estimates. That's not to say the rankings here are incorrect - Sensor Tower's insights are widely recognized as being a solid indicator of app performance. But at the same time, they are not definitive, so there is some room for differentiation.

Second, while the download numbers look good, they don't necessarily translate into active users - and it's been a long time since TikTok provided an update on is actual user count.

While there's no question that usage of the app is growing, TikTok has thus far been reluctant to release full breakdowns of its usage stats, though last month TikTok VP Blake Chandlee indicated to an audience at an Advertising Week event that the app does have more than 500 million users.

But that's not very clear - in July last year, TikTok reported that it had 500 million users "globally", though that figure included users of Douyin, the version of TikTok which operates within China. Douyin claimed last November to have 400 million actives in China alone, which means that TikTok could have around 100 million users, or maybe a lot more. Or not. No one's really sure.

Reports have suggested that TikTok's billion-dollar advertising assault has helped it rocket up the download charts, like this one, but that those who do download the app are not continuously coming back to it.

But again, we don't know if that's true because TikTok, and parent company ByteDance, haven't provided any clarification on this front.

TikTok, which is Chinese-owned, has also been caught up in concerns over potential state-backed censorship, and with tensions between the US and China escalating, that could be another point of concern for its long-term viability.

Basically, there's no denying that TikTok has appeal - but how far that appeal extends, and whether the company is able to navigate its way through these various concerns, these are questions we still don't have answers to as yet.

So should you be considering TikTok as a potential platform for your marketing efforts in 2020? If you're looking to reach younger audiences, it's definitely worth a look, but I would advise holding off on going 'all in' on TikTok just yet, as there are still a few elements that, ideally, will be clarified in the coming months.