TikTok has this week launched a new entertainment and information initiative to help lighten the mood amid the COVID-19 lockdowns, while also giving users a chance to ask questions of experts and engage with celebrities on the platform.

Called #HappyAtHome, the initiative will see well-known musicians, actors, comedians and more share a series of live-streams on the platform at 5pm, every day of next week.

"We've partnered with a wide range of amazing celebrities and creators to launch something special: #HappyAtHome: LIVE!, a week of nightly programming that kicks off today at 5:00 PM PDT and will run each evening through Friday. The goal is simple: share in a bit of levity, provide some comfort, and embrace the responsibility we all have to do the right thing by staying inside and stopping the spread. There's a lot we can't do right now, but this is one small way we can all help each other during these trying times."

It's unclear how long TikTok plans to run the program for, but it has an impressive list of celebrities lined up for the initial week of the initiative: 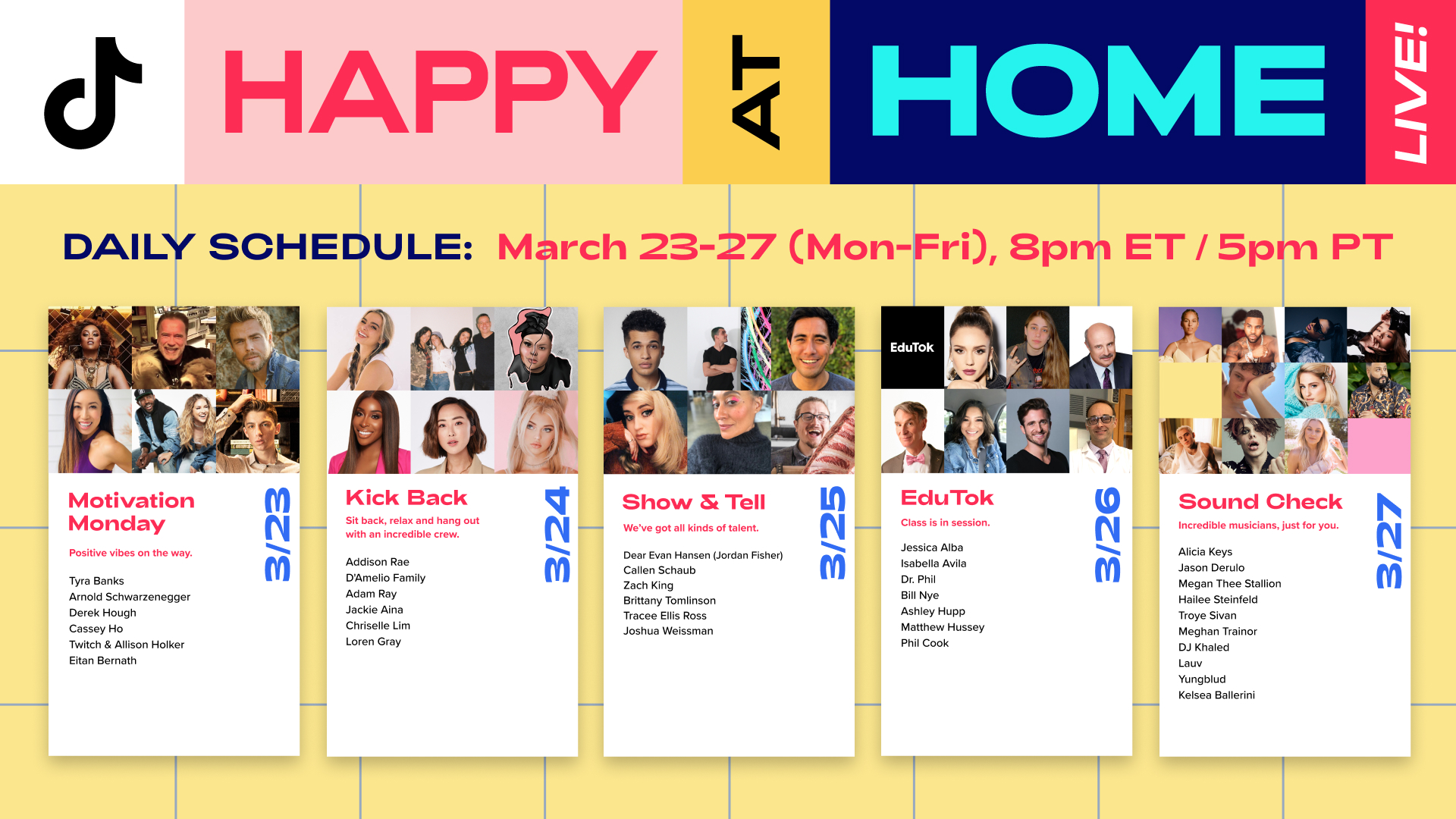 Note the educational element, with streams from the WHO also highlighted. The aim of the project is not only to provide people with entertainment, but also education on the current situation - and to underline that 'stay home' message.

This is an interesting time for TikTok, which has seen a significant rise in interest over the past year, and was still in the midst of its ascendance when the COVID-19 crisis hit. TikTok isn't yet in a position where it's generating significant revenue in western markets, and as such, its operations are at least somewhat covered by the revenue being generated by its Chinese sister app, Douyin, which generates the majority of its revenue through eCommerce integrations.

As time goes on, you would expect that TikTok would also be looking to eCommerce tools to maximize its revenue potential - and maybe, right now is the best time for the platform to make a move on this front, and start to integrate shopping options into TikTok clips.

It'll be interesting to see what TikTok does on this front - but in the immediate term, the app's focus continues to be on raising awareness, and getting as many users as possible coming back to its app. The opportunity for TikTok is now, so it's logical for it to be making such a significant investment in getting well-known celebrities to broadcast within the app, in order to diversify its audience reach. Attracting fans of these stars will help to further TikTok's awareness effort, even branching into older audience groups via celebrities with large, dedicated followings.

It's a good move by TikTok, and while questions remain over the app's longer-term viability and process, there's little doubting its potential to attract a crowd.

Next, it has to ensure it can keep them - and then, to convince them to spend in-app.