Amid ongoing negotiations about its future, and its likely sell-off to an American-owned organization to avoid a ban in the US, TikTok has this week launched a new information hub, which it says will 'serve as a source of truth' in counter to the various rumors around the app. 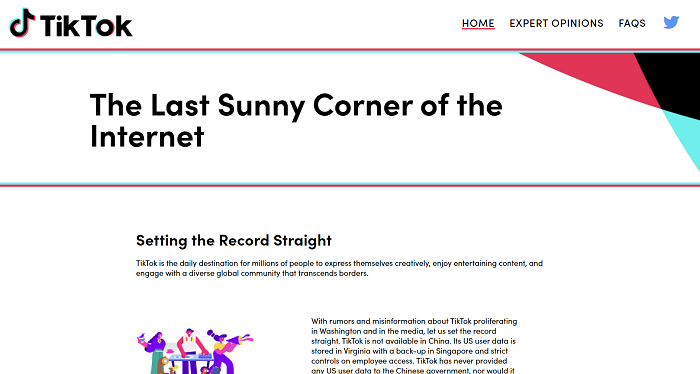 The 'Last Sunny Corner of the Internet' is TikTok itself in this context, that's not the title of the information hub.

"Transparency is at our core, and we are committed to leading the industry in security and accountability. Today, we are taking another step to continue to build trust with our TikTok community by delivering the facts - in our own words and in the words of leading experts across cybersecurity, media and academia - because we neither support nor stand for the spread of misinformation on our platform, or about our platform."

That misinformation, according to TikTok, is what's lead to the US Government's Executive Order which will effectively force parent company ByteDance to sell-off TikTok to a US company.

Within the EO from The White House, issued on August 6th, the US Government identified two key threats posed by the short-form video app:

Neither of these claims has been effectively proven, though various official reports have suggested that there is cause for concern, and the US Government has repeatedly cited credible evidence of such, without public release of specifics.

TikTok railed against these in its official response to the Order, saying that:

"The text of the [EO] makes it plain that there has been a reliance on unnamed "reports" with no citations, fears that the app "may be" used for misinformation campaigns with no substantiation of such fears, and concerns about the collection of data that is industry standard for thousands of mobile apps around the world."

The company has subsequenly threatened legal action against the US Government over its action but thus far, neither side has made any further move in this respect.

TikTok seems to be hoping that its new information center will help quell such reports, and reassure people that it is safe, that it's not beholden to the Chinese Government, and that TikTok is a trustworthy, safe app to use in all respects.

The information center shares a range of official announcements from TikTok, as well as news stories which reflect the platform in a positive light.

It also has a section called 'Expert Opinions' which showcases various reports on its platform, its algorithms and its broader impacts. 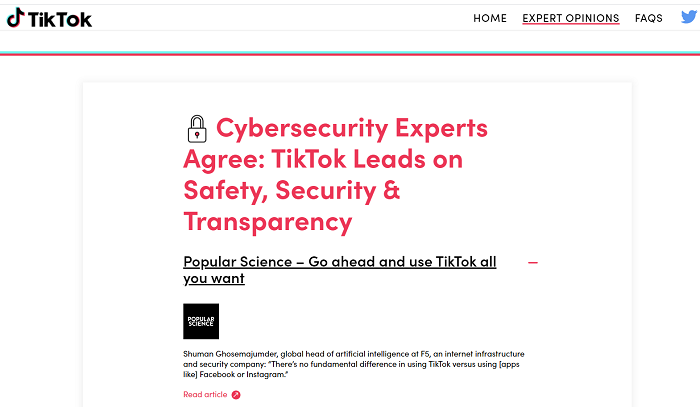 There's even a listing of quotes from experts that underline TikTok's benefits.

And there's an FAQ section, which includes the first time (that I'm aware of) that TikTok has official stated that it will not share data with the Chinese Government.

My understanding is that TikTok, as a Chinese-owned app, is beholden to China's cybersecurity laws, which dictate that it would need to provide user data to the CCP on request. Here, TikTok is saying, definitively, that it would not do so.

Though it may not matter anymore, as the US Government has already made its move, and with the US being a key market for the app, it looks like it will indeed need to sell-off the platform in order to maintain its operations.

In which case, the new Information Center may not serve much purpose, outside of TikTok using it as, essentially, a propaganda outlet to showcase positive news about the app.

Either way, there's now a new place for TikTok to share its side of the story - while negotiations on the sale of the app continue.