TikTok is either the next big thing in digital marketing, or simply the latest fad that will eventually peter out. Where you stand on this will come down to your individual perspective.

On one hand, TikTok's popularity doesn't appear to be slowing. According to the latest data from Sensor Tower, the short video app has now exceeded 1.5 billion downloads worldwide, making it the third most downloaded, non-gaming app of the year (after WhatsApp and Messenger). 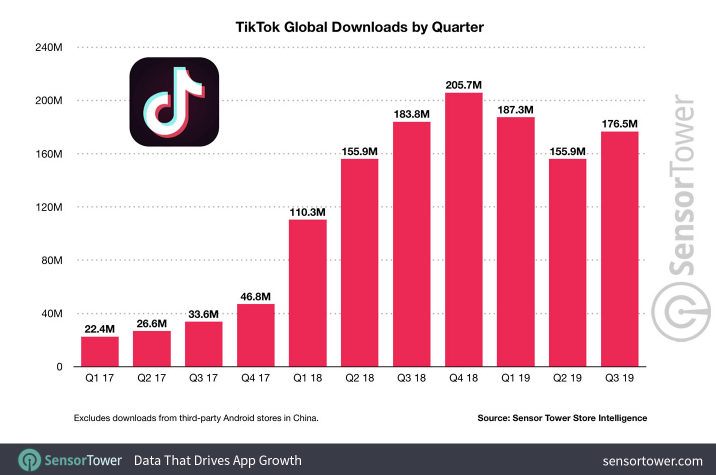 The app has proven particularly popular in India, as explained by Sensor Tower:

"India has been the main driver of TikTok downloads across the App Store and Google Play, with 466.8 million, or about 31% of all unique installs coming from the country. China has generated the second most downloads for the app, accounting for 173.2 million, or 11.5%. The United States ranks No. 3, generating 123.8 million downloads, or 8.2%."

US growth is good, but India, with over 1.3 billion total citizens, and a rapidly growing digital economy, may be even better for the app's longer-term future - if TikTok becomes the must-have app among younger Indian users, that will set it up for huge success, and huge advertising potential in that market.

Expanding on this, TikTok is also looking into new music streaming partnerships, which would enable it to not only connect its users to downloadable music from major artists, but would also facilitate the creation of its own music library, which users could then search through and add to their TikTok videos, streamlining the process.

TikTok's also experimenting with social commerce links and new ad types which could expand on its potential for brands and businesses.

There's a lot to like for social media marketers, and TikTok could well be for real, and could be set for a major rise in 2020.

But then again, on the other hand...

TikTok is also under investigation over its potential links to the Chinese Government - or not so much its links to the Chinese regime as such, but more the obligations it could face, as a Chinese company, in regards to the data it collects on users. If the Chinese Government came calling on TikTok's parent company ByteDance and requested all the data it has as part of a broader surveillance effort, ByteDance would likely have to abide - and this is before you consider questions of censorship and the potential sharing of communist propaganda among the youth of external nations.

TikTok is working to distance itself from such claims. This week, Alex Zhu, one of the founders of Musical.ly, and a current leader at TikTok, spoke to The New York Times about such concerns and how his company sees it:

"No, TikTok does not censor videos that displease China, he said. And no, it does not share user data with China, or even with its Beijing-based parent company. All data on TikTok users worldwide is stored in Virginia, he said, with a backup server in Singapore."

And if it were requested to turn over user data by the Chinese Government? Zhu says that he would turn them down.

But then, of course, TikTok would say that - whether that's how it would work in action is another thing. But the fact that Zhu is even addressing such questions, and doing PR interviews in America, shows just how concerned TikTok is about such reports. Other rumors suggest that TikTok has even considered re-branding entirely to further distance itself from its Chinese parent, while various company executives have sought to quell concerns around content censorship and removal on the platform - which reports have shown may not be as prominent as once suspected.

There are also concerns with its actual user counts - the app may have been downloaded 1.5 billion times, but downloads are not the same as active users, which TikTok has been less forthcoming about.

In combination, these concerns equate to a significant gray area in TikTok's rise, which could become a major issue. Or, as TikTok is keen to reassure, it could be nothing.

Maybe TikTok comes out next month at reports that it has 500 million active US users, which would be significant, and that, in turn, sparks a new wave of advertisers flocking to the app, regardless of these potential vulnerabilities. Maybe the various investigations into TikTok equate to nothing, and the app adds links for creators, and facilitates a whole new stream of monetization, succeeding where Vine failed. That could be enough to help it establish new foundations for ongoing success.

Maybe, we don't know at this stage.

Does that mean you should avoid it completely? It depends on your audience, the market you're trying to reach, it depends on where you stand on the above-noted issues and where you believe that TikTok is headed. If you have concerns about building reliance on a platform with several questions still swirling around it, you should probably avoid such, but the full picture is still not 100% clear on the app right now.

2020 could be the year for TikTok, and if it continues its rise in India, it could well be on track to become the next big social platform - and as such, getting in now and establishing a presence may be of some benefit. Or it could stumble and fall back.

It's hard to say which way things are headed, but it's something that will no doubt be debated by many marketing teams heading into the new year.