Earlier this week, Twitter announced a new push to remove inactive accounts from follower lists, which, Twitter noted, would likely see all accounts lose around four followers each, on average. But the larger your account, the bigger your exposure – Twitter also said that it would be removing ‘tens of millions’ of profiles from follower counts, so potentially, it could have a major impact on the numbers.

So which profiles have been most impacted by Twitter’s new action? Socialbakers has provided this overview of how the process has impacted the top 500 Twitter accounts, by follower numbers. 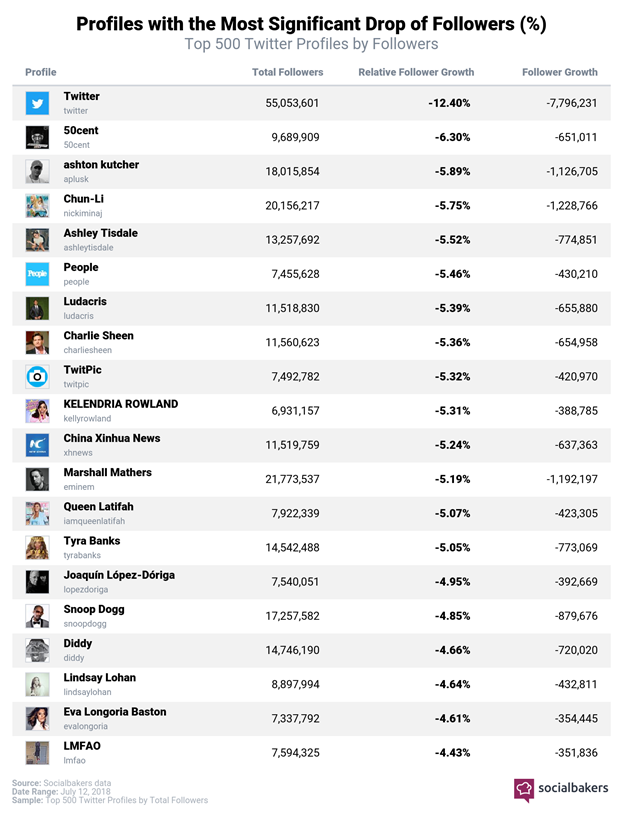 Some fairly significant shifts – some people have pointed the finger at Twitter here, highlighting how funny it is that Twitter itself, based on these figures at least, looks like its cheating its numbers. But it makes sense that scammers and bots would follow the main Twitter account in an effort to legitimize themselves.

You may also note that the biggest Twitter accounts – Kary Perry and Justin Bieber – aren’t on this listing. They have lost a lot of followers, but in overall terms, they’re not among the most impacted by this action.

Here are the top 500 most followed Twitter accounts ranked by total drops, in terms of raw follower numbers (not %). 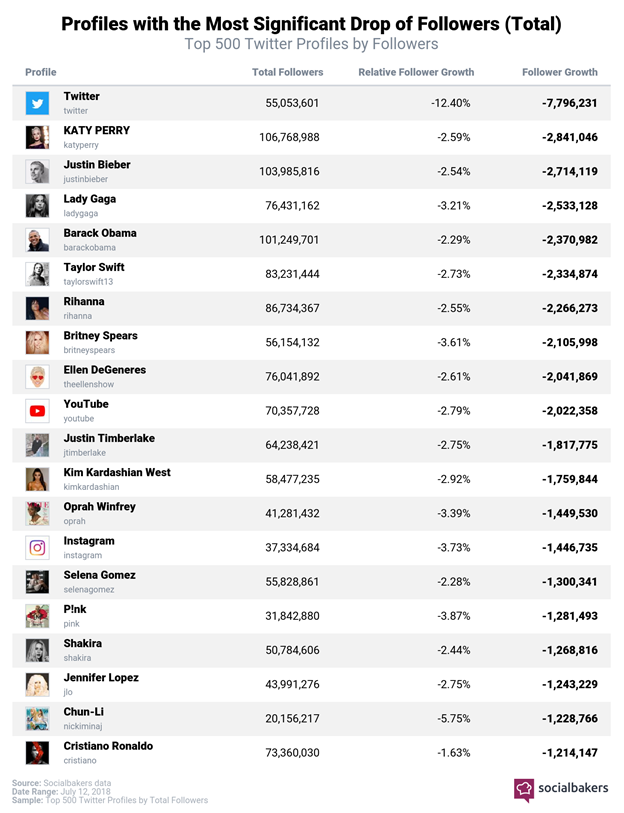 And these aren’t even the worst of it – according to social media expert Matt Navarra, some users have lost up to 70% of their total following on the platform.

Of course, the removed accounts are inactive anyway, according to Twitter, so they’re literally doing nothing other than contributing another number. They don’t interact, they don’t tweet themselves. These are ‘dead’ accounts, and are purely propping up account followings.

As such, the removals are a good thing – Twitter’s working to ensure that its metrics are accurate and represent actual, engaged audience members, so that when people see a Twitter follower count, that number is meaningful and not tinged with doubt. This is becoming increasingly more important, particularly as influencer marketing continues to rise.

Using platform experts to help boost your brand messaging is becoming a more significant consideration because of the greater prevalence of algorithms – with the platforms themselves putting increased emphasis on engagement to determine reach, it makes sense to tap into influencers who understand how to best use the tools in order to broaden your messaging.

Follower counts are often used as an indicator of such influence, but everyone knows that you can easily purchase followers - cheating the system is neither difficult nor expensive.

Given this, and in combination with Twitter's broader actions to bring integrity to its metrics, you can expect to see the platform continue to push on this front, and likely for more third parties to provide new ways to measure actual influence, which is not based on raw metrics.