Twitter has added another warning prompt to slow the spread of misinformation, this time alerting users when they go to share a tweet which has been flagged under the platform's rules against misinformation. 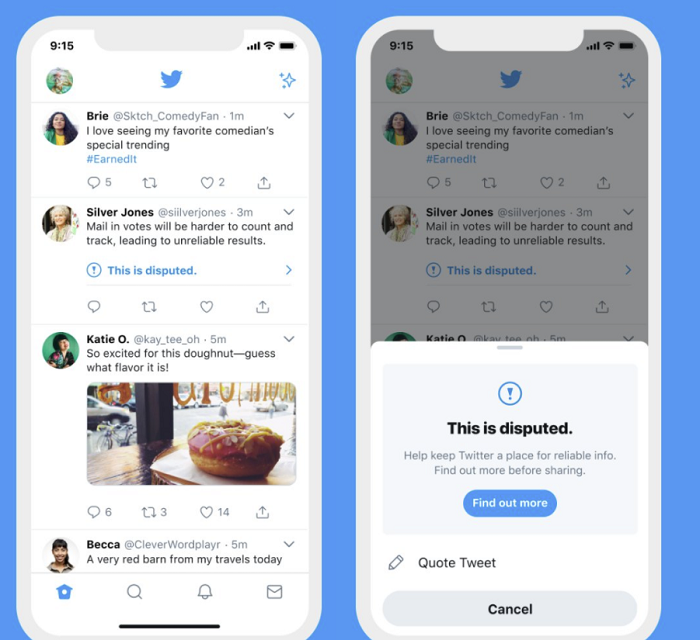 As you can see here, the prompt will alert the user looking to retweet or quote tweet that the claim included in the original message is in dispute, and link them through to more information.

The added friction in the tweet process could help to slow people from amplifying false claims - Twitter has also added similar for tweets where the re-tweeter hasn't opened the attached article, while it's also removed the straight retweet option entirely for US users in the lead up to the US election.

You can still re-tweet by not entering anything into the 'Quote Tweet' composer window, but the idea is that by prompting users to add their own thoughts - or at the least, think about why they're re-tweeting a message - it could reduce blind amplification of messages, and provide more nuance in debate.

And Twitter has already seen results from these new prompts. The platform recently reported that users are opening articles 40% more often when shown its new 'read before retweeting' message.

This latest update, as Twitter notes, will apply to all tweets tagged as containing misleading information, and that small bit of pushback could definitely make more people think twice about re-distributing such messages.

Of course, many of the issues identified with Twitter amplifcation of such content in the past have related to the use of bots, with some reports suggesting that swarms of bot armies are used to amplify certain political messages, and influence the subsequent conversation.

Twitter's tackling this element as well, and in combination, these measures should reduce the influence of re-sharing of questionable claims in tweets, in all contexts, moving forward.