After testing a new version of its desktop UI with selected users over the past few months, Twitter has this week announced that it's now rolling out the updated Twitter.com experience to all users.

As you can see from the video, the new Twitter for desktop includes a range of updated features, including:

As noted, the new desktop UI was first rolled out to some users back in January - if you were among that initial test pool, you would have seen a notification like this: 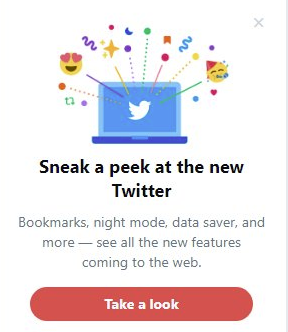 Aside from the cosmetic changes, which will initially be what stands out, Twitter's also working to improve its back-end systems and processes to ensure that its desktop and mobile experiences are better integrated, and inclusive for all users.

Over on the Twitter Engineering blog, Twitter's technical team provides a more in-depth explanation of this approach, including an outline of why Twitter chose to re-build its desktop version:

"One of Twitter’s goals is to reach everyone everywhere.  Twitter’s web apps are critical to making this happen. They don’t require installation and are immediately accessible by almost every connected device in the world. The open web has unparalleled discoverability and reach. However, the Twitter web team found it difficult to deliver on the promise of bringing Twitter’s features to everyone on the web due to our large user base and the variety of devices they use."

That prompted the desktop re-build - which is, indeed, exactly that. Twitter says it started all over again with its desktop site, with the new version being more aligned with the functionality of the more complex mobile version. Twitter's aim is to align with a "write once, run everywhere" approach, which will ensure that all functionality is available on any version of the platform, meaning desktop users don't get left behind with new tools.

In my own experience (I was part of the initial January test pool), the new desktop version is an improvement, and while it takes a second to get used to, I found myself reverting to the newer version fairly quickly, and haven't looked back.

A small visual feature addition to also check out.

The new Twitter.com will be available to all users from this week.