After initially testing them out with users in Japan, Twitter is now bringing its animated stickers for Fleets to all regions, providing a new option to enhance your posts within its Stories-like tool.

Your Fleets just got an upgrade.

Now you can express yourself in the conversation with stickers. Add GIFs and Twemojis to a Fleet by tapping the ???? icon, on Android and iOS. pic.twitter.com/Ihh9ZZh70a

As you can see here, users will now be able to add animated Twemojis and GIFs to their Fleets, providing an additional visual element to the option.

Users will be able to access the new Fleets stickers by tapping on the smiley face icon within the Fleets composer, which also includes a search bar to help users locate the right sticker for their image or video update. 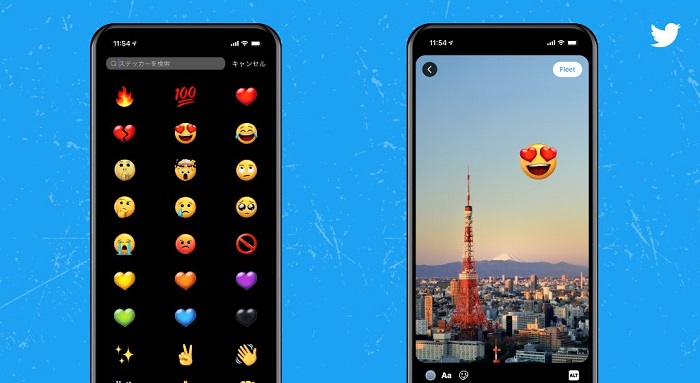 As noted, Twitter began testing the option with Japanese users last month, and the addition is not a huge surprise, given the breadth of enhancement tools available in other Stories options, which is where Fleets, at least at this stage, is lacking in functionality.

It's actually a little strange that Twitter chose to launch Fleets without any visual enhancement tools, given that Stories on Snapchat, Facebook and Instagram all feature cutting-edge AR filters, which have helped them boost usage. Heck, even LinkedIn Stories has stickers, so why Twitter began with so few options for its take is strange, but these new, animated visuals are the first addition on this front, and will likely be the jumping-off point for more tools in Fleets in future.

Twitter increased the expectations around its potential Fleets tools last year, when it acquired Chroma Labs, the developer of Chroma Stories, which provided stylistic frames and filter options for Stories content on other platforms. Twitter hasn't transferred those additions into Fleets yet - but again, given the availability of other Stories tools, it seems inevitable that the Fleets toolset will expand over time.

Will that expand Fleets usage? It's hard to say. Right now, it doesn't seem like Fleets is a major consideration for most Twitter users, but the top of app placement is a good opportunity for exposure, which has proven to be a good lure for at least some users.

We'll have to wait on Twitter to get some real usage stats on the tool, but now, you can add in these bright, pulsing images on top of your Fleets.

Fleets stickers are now available on iOS and Android.