Private Twitter Spaces are coming, with Twitter testing new options that would enable Spaces hosts to restrict who can join their audio discussions, facilitating more private chat sessions in the app. 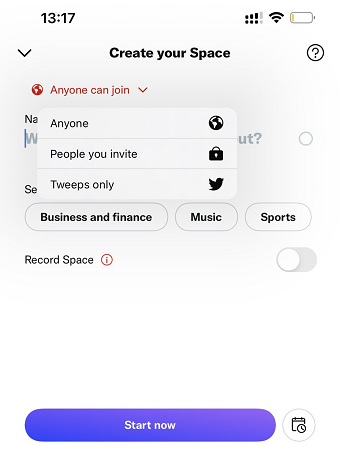 As you can see in this example, posted by user Chloe Korzh (and shared by Matt Navarra), Twitter’s currently testing two new Spaces audience options that would enable Spaces hosts to limit access to either only those people that they specifically invite, or to ‘tweeps’ only – aka only your followers.

That could provide new usage considerations for Spaces, with the capacity to use the option for more intimate chats among friends, or to help build community by holding more private discussions among your audience.

That could also have specific value for brands, with the option to host exclusive audio chat sessions for super fans, or to provide followers only with new updates. Used well, this could become a growth tactic, with the FOMO factor helping to get more people to follow your brand account, in order to ensure that they too are invited to the next exclusive Spaces session outlining the latest product details and/or offers.

Spaces is still in a relatively early growth phase, despite being launched more than a year ago. Twitter has advanced the option significantly since its early testing, which was sparked by the sudden rise in interest in Clubhouse - yet, even so, the dedicated Spaces tab, for example, is still not available to all users, which means that the option still has some way to go in maximizing its opportunities, and truly testing whether it can become a more essential element in the broader tweet process.

Part of the problem, right now, is discovery, and ensuring that all users are aware of in-progress Spaces of interest as they happen. While Spaces are now recordable, the best of Spaces engagement comes in real time, and as such, in order to fully maximize the option, Twitter’s algorithms need to both understand the topics of interest to each user, and be able to highlight relevant Spaces immediately, whenever you’re in the app.

That’s not easy, because with everyone able to broadcast in the app, there’s a lot of irrelevant Spaces happening at any given time. So while the topic might match a users’ interests, if the Space quality is no good, getting them to tune in could actually further turn them off the option, limiting future take-up and growth.

As such, the only real way to highlight the most relevant Spaces is to show users when people that they follow are attending a broadcast. Which Twitter does, but that doesn’t necessarily tackle the issue of expanded topic discovery and engagement.

It’s a difficult balance, but maybe, with more intimate, enclosed Spaces groups, that could help to improve Space relevance, while also, as noted, facilitating new use cases and options.

We’ve asked Twitter for more info on the test and we’ll update this post if/when we hear back.