Twitter has added a handy new update to its reply control options, which it first rolled out in August last year, enabling users to delineate who can reply to their posts.

As you can see here, with the original update, Twitter enabled users to choose who could reply to their tweets - 'Everyone', 'People you follow' or 'Only people you mention' - within the tweet creation process. The problem with that is that, sometimes, you might want to update your audience in retrospect, maybe due to getting hate in your replies, or sparking an unintended argument with your original comment.

In such cases, you could just hit delete - but now Twitter's added a new consideration into the mix, with retrospective audience control options, which means that you can restrict or update who can reply to any of your tweets at any time, even well after you've hit 'Tweet'. 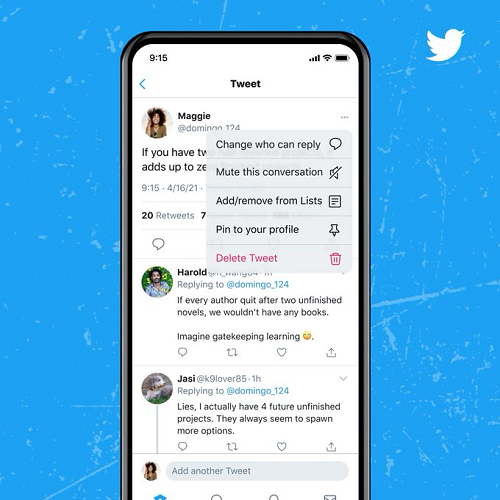 There could be various use cases for this. As shown in the above example, maybe your tweet triggers abusive or argumentative responses and you just don't have the time for it, or you realize that your comment was more a statement than a conversation piece, and you'd rather just switch the responses off.

Again, deleting the original is always an option - but sometimes you want to stand by the comment, you just don't want to have to deal with the varying opinions.

Of course, some will argue that you shouldn't shy away from differing views - and it's social media after all, where you should aim to be social with your interactions. But at the same time, having options to manage your own experience, and mental health, are important. And sometimes you just don't want to deal with the back and forth.

So now, you'll have more considerations in how to manage such, which may not be a revolutionary update, but could end up being a highly beneficial one, in various ways.

Transparency and openness is important in many contexts, but so is your own mental health. Worth keeping in mind in your process.