Twitter has updated the format of its TV show reminder buttons, which, when tapped, notify users when TV shows will go to air. 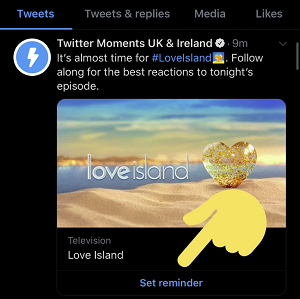 As you can see in this example (shared by social media expert Matt Navarra), the new reminder button format places a large 'Set Reminder' CTA at the bottom of the tweet. The same format has also been added to event pages via Twitter Explore. 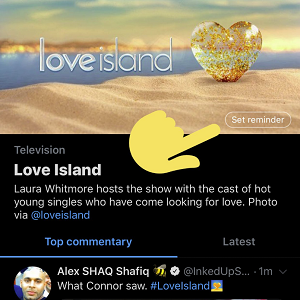 Some users have reported seeing the new format of the button for some time, but it appears to have been expanded only recently, though variations of the option have been in circulation on the platform for the last few years.

Twitter's 'Tune-in' reminders, for example, one of the platform's auto-reply campaign options, utilize effectively the same process, though it relies on re-tweets to set reminders, as opposed to pressing a dedicated button for such.

The new format is a more refined variation of the same, which could help improve engagement, and ideally for Twitter, get more people tweeting about the latest TV shows.

Twitter has been working for years to try and establish better linkage between its platform and TV viewing. Various studies have shown that traditional TV viewers are increasingly engaging on social platforms to discuss the content they're watching, with social apps being the most popular apps that people use when viewing TV shows, by a big margin.

Add to this the fact that some 94% of people now keep a smartphone on hand while watching TV, and the opportunity is clear.

The open, public nature of Twitter makes it the ideal platform for live-tweeting TV content, and while Twitter hasn't yet been able to fully integrate its own live-stream broadcasts and tweets into a single platform, it knows that facilitating more TV engagement on its platform is a key pathway to increasing engagement.

Case in point, the death of the Night King on Game of Thrones last year sparked "over 80,000 Twitter interactions in that single moment", according to Nielsen research.

Given this, it makes sense for Twitter to look to improve its connection options on this front, and facilitate ways in which to keep Twitter users more engaged with TV shows. The same option could also come in handy later this year when Twitter broadcasts the 2020 Tokyo Olympics, with some events set to stream live on the platform. That will likely prove to be a key test for Twitter's streaming capacity, and capability to prompt further engagement around such events. If Twitter is able to maximize engagement around its Olympics coverage, it could help set a new course for the app's broader TV connection goals.

This updated reminder is a lesser element in this, but still, it may be an indicator of Twitter's next push to improve its TV integration elements.