After rolling out its tweet reply controls to all users back in August, providing new ways to manage who can interact with your tweets, Twitter's reportedly now working on a new addition to this process which would enable users to limit tweet replies to their followers only.

As shared by reverse engineering expert Jane Manchun Wong, the new process would provide an additional option in your tweet reply controls on top of the three that are currently available: 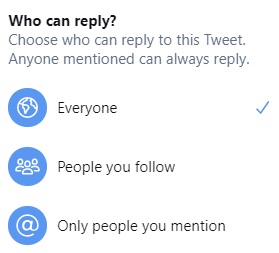 As you can see here, your options are currently:

The new option would also add 'Your followers only', giving you another way to manage the surrounding tweet conversation, and control the subsequent discussion.

That would make sense - with this option, you could facilitate more specific discussion within your Twitter community, while weeding out spammers and trolls who are not a regular part of your group. That could be beneficial for more focused chats, for example, when you want to have a more meaningful, informed discussion amongst those in your niche, without opening it up to anybody who wants to throw in a random opinion - or a link back to their Fiverr account.

Of course, if someone really wanted to disrupt your discussion, they could just follow your profile and start replying, but it could still limit opportunistic spammers from jumping into your mentions by adding an extra step to the process.

It could also be beneficial for Twitter to limit the discussion entirely to your followers, so that it only appears in their timelines. That would make it a more enclosed, discussion - but then again, that's also getting close to just making a private account. With a private profile, your tweets are only visible to those who follow you, and you can approve or deny follower applications.

That's obviously not an ideal option, as business profiles will want the majority of their tweets to be public. But there could be some benefit to having a private discussion option among followers, while also maintaining a public account overall. That could be a difficult balance for Twitter's development team to work out, but it would allow for further community building and engagement in the app.

Limiting who can reply is likely the closest we'll get on this, and as noted, while it could be easily subverted for those dedicated enough to push through, it could add just a little bit more friction to slow down spammers. And if you really want to avoid them, you can limit your replies to only those that you follow, then hand-pick your group.