WhatsApp's Launching a Second, Cautious Attempt to Update its Terms of Service

After its first attempt at updating its Terms of Service saw major user backlash across the globe, WhatsApp has now launched a new effort to better explain its upcoming data sharing change, and alleviate concerns around the still-planned update.

To reiterate, back in January, WhatsApp announced that it was updating its terms to enable it to further utilize information relating to business interactions within the app. Personal conversations in the app are not impacted by the change, but the way in which the update was initially communicated lead to a wave of blowback, with WhatsApp users particularly upset that their personal information may be made accessible to parent company Facebook.

WhatsApp went to great lengths to explain the change, and reassure users, but the damage was done, with millions of users downloading alternative messaging apps like Signal and Telegram instead. That, eventually, lead to WhatsApp delaying the change.

Now it's taking the first steps towards having another attempt and the update - as explained by WhatsApp:

"We previously encountered a great deal of misinformation about this update and we continue to work hard to clear up any confusion.[...] We’ve reflected on what we could have done better here. We want everyone to know our history of defending end-to-end encryption and trust we’re committed to protecting people’s privacy and security. We’re now using our Status feature to share our values and updates directly within WhatsApp. We’ll be doing much more to make our voice clear going forward."

That will include new direct, detailed prompts within business chats: 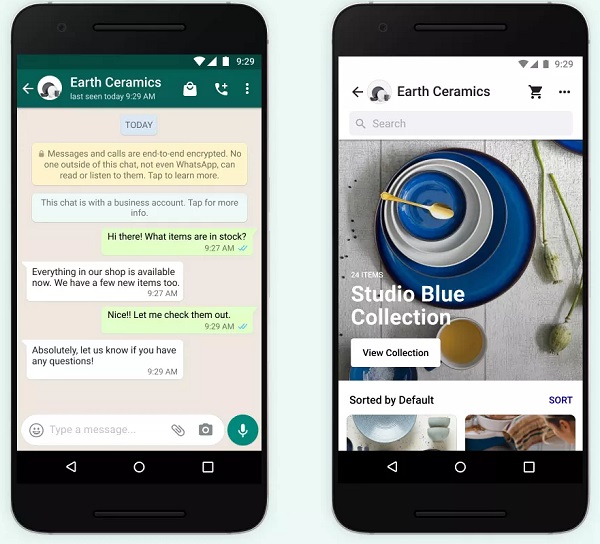 But that's not all, WhatsApp is also adding new in-app banners to provide more information on the change, while it's also published quick explainers in multiple languages: 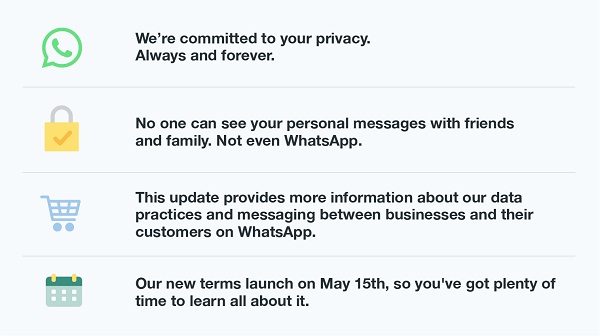 While WhatsApp chief Will Cathcart posted this earnest video:

We are doing more to explain how WhatsApp continues to protect people's privacy and I wanted to share our plans here first pic.twitter.com/ja6tqGZ3yi

If it seems like WhatsApp is being extra, extra cautious, that's because it is. Again, millions of users downloaded alternate messaging apps in the weeks following WhatsApp's first announcement, while internally, WhatsApp must have also seen a significant decline in usage, prompting its re-think.

"During this time, we understand some people may check out other apps to see what they have to offer. We’ve seen some of our competitors try to get away with claiming they can’t see people’s messages - if an app doesn’t offer end-to-end encryption by default that means they can read your messages. Other apps say they’re better because they know even less information than WhatsApp. We believe people are looking for apps to be both reliable and safe, even if that requires WhatsApp having some limited data. We strive to be thoughtful on the decisions we make and we’ll continue to develop new ways of meeting these responsibilities with less information, not more."

Definitely, the backlash has freaked Team WhatsApp out. Which is a little surprising - WhatsApp is the most-used messaging app in the world, with over 2 billion monthly actives. You would think that, at such scale, it would be willing to weather the storm somewhat. The scope of its response underlines just how significant that initial user reaction must have been.

WhatsApp's planning to roll out its new terms of service update in May, so it's getting in early to address all concerns ahead of time. That should leave it plenty of room to respond to lingering concerns and reassure users ahead of the actual update.