YouTube has announced a new slate of programming for YouTube Kids, including Original shows aligned with child development and literacy education, and more diverse representation, along with additional language options.

YouTube has picked up eight new shows, including “Book Tube Jr.” and “The Eggventurers,” while it also has an additional 25 projects in development.

Kids content on YouTube is becoming increasingly important, because while most of the older generation still remembers getting up early in the morning to catch the latest cartoons on TV, kids these days are mostly consuming such on their own tablets and/or other forms of connected devices. Indeed, various studies have shown that younger viewers now prefer YouTube over traditional TV, and those viewing habits tend to become habitual, which is gradually causing a transformative impact on consumption behaviors over time.

The most telling study on this was published by Lego back in 2019, which found that more kids in the UK and the US now aspire to become YouTubers when they grow up than those who want to become astronauts (which is still the most popular goal among children in China). 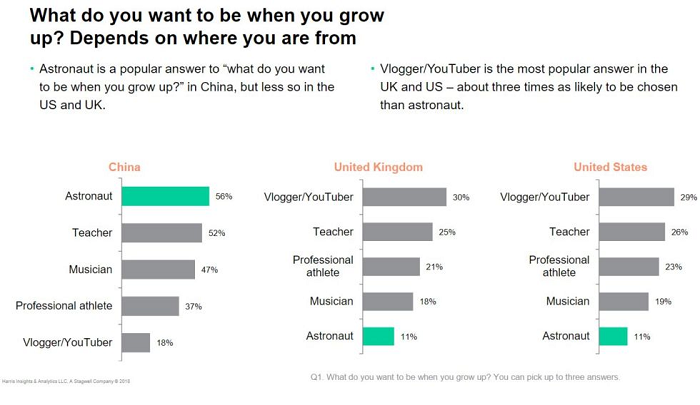 For marketers, it's important to note the significance of these shifts, and how they're changing the way people are looking to connect with information, and content, over time.

The new programming is part of the platform's previously announced $100 million commitment to invest in kids, family and educational programming, which YouTube implemented as a means to reduce the financial impacts on creators caused by changes to its rules around kids' entertainment.

Last year, in alignment with the Children’s Online Privacy Protection Act (COPPA), YouTube announced that targeted ads would no longer be allowed on kids’ videos, while content aimed at younger users would also lose access to comments and other community features. That's impacted the capacity for kids creators to generate revenue on the platform, which is why YouTube is now looking to fund specific programs under this new initiative.

In 2019, YouTube was fined a record $170 million for violations of the COPPA rules, due to data collection on such clips.

As noted, YouTube has developed its new Kids programming in collaboration with experts in areas related to child safety, child development, and digital literacy. And for the first time, some of this programming will also be available in additional languages.

"The scripted quarantine mystery series “Lockdown” - which was produced by Canada’s Sinking Ship Entertainment and received multiple accolades including the Prix Jeunesse International Award and a Content Innovation Award - will launch Spanish-dubbed versions of its 16 episodes. From SmartStudy, YouTube Originals’ first Korean animated title “Pinkfong Wonderstar,” will also roll out several new language versions throughout the year to join its previously released English and Korean editions, which have together captured more than 30 million views since launching in December 2020."

It's amazing to consider the impact that YouTube has had on video entertainment over the past couple of decades, and the way that it's now influencing the way younger consumers interact and engage. As such, it's worth noting these behavioral shifts, and considering how they're influencing the responses of the next generation, and the ways in which they find and view content.