Here's a small, but welcome update - YouTube has announced that it's removing the ability for users to automatically share their on-platform actions to Google+ and Twitter.

You've no doubt seen the tweets - do any of these examples ring a bell? 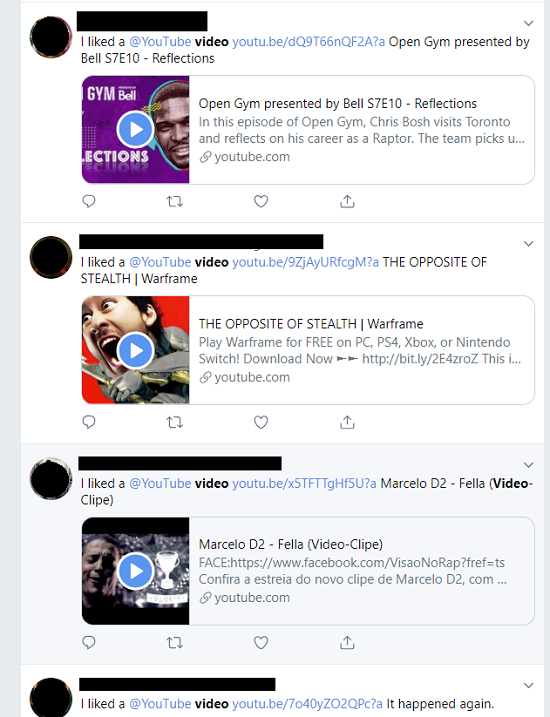 They should, there are millions of them on Twitter. These tweets are auto-posted based on a YouTube setting, which also enables you to auto-tweet when you add a new video, when you add a video to a public playlist and when you save a playlist. You also used to be able to auto-post your YouTube comments, though that functionality appears to have already been removed.

"Many years ago, we introduced the option to automatically post your public YouTube activity with your social media followers on both Twitter and Google+. Since then, we’ve found that social sharing works better when the message is more customized and takes advantage of social media features, such as @mentions. Overall, this provides a better experience for both you and your followers vs automatically generated posts."

On that, we definitely agree - these YouTube activity posts not only look outdated, but they also don't seem overly engaging or interesting, so it's good to see YouTube remove the functionality. If you want to share a YouTube video, you should do so by creating a separate, dedicated post, tailored to the relevant platform, and/or by using YouTube's 'Share' button.

This could be something of an annoyance for creators who use the tool to easily alert their Twitter audiences to their latest videos, but outside of that, there doesn't appear to be a lot of downside here. Of course, if it is a functionality you love, you can still replicate it via IFTTT. If you want.

Updates like this represent a maturing of social networking, where older, clumsier tactics are being wound back in order to focus on more authentic usage. And while that may not be as convenient as automating certain elements, these days, audience expectations are higher - you can't just post the same tweet or the same Facebook post across multiple platforms and expect optimal interest and/or engagement.

You may recall that last year Facebook also removed the option to automatically re-post your tweets and re-tweets to its platform, another welcome update.

It's not a major update, though it'll be interesting to see whether it actually impacts overall tweet activity. If you consider that over a billion hours of content are viewed on YouTube daily, even if only a small percentage of those users have this functionality turned on, that could equate to several hundred thousand - or more - automated YouTube tweets being created every day. Will those reduce the broader engagement stats and usage on Twitter?

I mean, probably not, and you would think that Twitter wouldn't count automated YouTube tweets within its active usage counts (if, for example, those users weren't actually logging on to Twitter as well). But still, it could be a lot of junk tweets removed, and could have an impact.

The option to auto-share your YouTube activity to Twitter and Google+ will be removed on January 31st, 2019