YouTube Rolls Out Activity Graph to All Videos, Ups the Maximum Price of Channel Memberships

YouTube’s rolling out a new video activity graph to all videos, which will display the most engaged moments within each upload, based on when users are replaying segments. 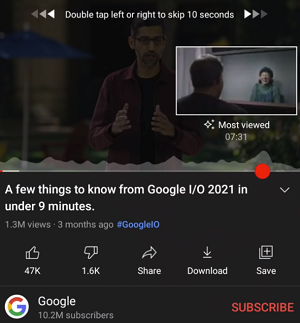 Initially previewed last October, and launched to selected creators, the graph will help users find the most relevant sections of every YouTube clip.

“The peaks of the graph indicate the parts of the video that have been most replayed, and the graph will only appear if the user starts seeking. We found in our experiments that viewers love this feature, with 85% of users liking the option.”

That could be particularly helpful for longer videos, or tutorials that take a while to get to the point. If you’re stuck on a specific element that you need help with, it’s likely that others are too, and that'll likely be the point of the clip with the highest engagement, making it easy to skip through and locate.

Though from a creators perspective, it could also impact watch time, with users now given a new way to skim through and find specific elements of each clip. Various creators have raised this concern since the beginning of the test, and YouTube says that, in its experiments, the presence of the video graph didn’t reduce watch time. So far at least.

It could be worth keeping an eye on your stats as more users get access to this feature.

YouTube’s also rolling out support for video chapters to smart TVs and gaming consoles, providing another way for people to find specific sections in clip.

On another front, YouTube’s also added a new tool in YouTube Studio which enables creators to see which auto translated captions are used most on their clips.

That’ll help creators understand which languages are most relevant to their audience, which could then help in guiding which translations to focus on in your own caption uploads, while also providing more insight into the audience that you’re reaching with your clips.

You can find the new translations report in the Audience tab or in the subtitle report in advanced analytics.

Lastly, YouTube has also increased the maximum price of monthly channel membership to $499 – up from $99 previously. 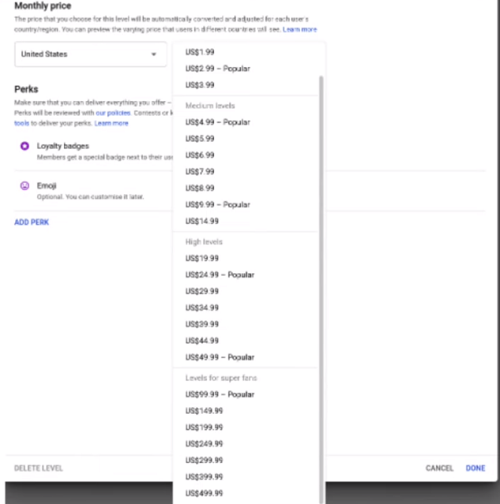 So now, if you have really dedicated, really engaged fans, you can up the price of your memberships, by more than 5x the previous limit. It’s also, notably, significantly higher than Twitch’s current member pricing limit.

Are people really willing to pay $499 a month for a channel subscription? We’ll find out, but YouTube does note that this has been a requested update.

These are some interesting notes, which could impact your YouTube approach, and again, it’ll be worth keeping an eye on your performance numbers to see if these new segmentation and skimming options reduce overall watch time – and thus, engagement stats.