YouTube's video recommendation tools have become a new area of concern for the company of late.

Back in January, YouTube announced changes to its recommendation algorithm after reports found that its system was promoting conspiracy theories and fake news content, amplifying such misinformation. Even more recently, The New York Times published an article which looked, in detail, at how a young American man was radicalized by YouTube content, sinking further and further down the rabbit hole with each tap of his 'Up Next...' recommendations.

YouTube is now investigating various ways to ensure users are not being steered in concerning directions by its recommendations - and this week, the platform has announced some new changes which will put more power into the hands of users in regards to the videos which are recommended to them.

First up, YouTube's adding new topic tags within recommendations listings which will help users find more specific recommendations based on their chosen area of interest - as opposed to the system assuming the next likely topics itself.

That could help stop users clicking into more concerning segues off certain topics, and keep them aligned to the topics they're most interested in.

The feature, as you can see here, will be available on the homepage when you scroll up, and on your 'Up Next' listing when browsing in app. It's first being made available in English, with other languages to follow soon.

YouTube's also giving users more control over their personal recommendations by enabling them to remove selected channels from their recommendations.

This, again, could stop users falling down YouTube rabbit holes by removing the option before you even start on that path. YouTube notes that users will still be able to find any of these removed channels via direct search, and could still see their content on the Trending tab. But their videos will no longer appear in your recommendations list.

The feature is now available in the YouTube app, and will be available on desktop soon.

And lastly, YouTube is also adding a new information marker on videos it recommends for you based on what "other viewers with similar interests have liked and watched in the past". 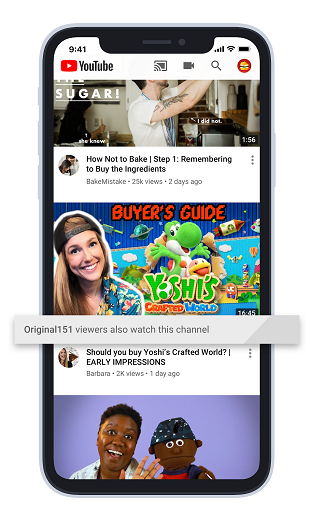 This is similar to the tools that Facebook uses to surface video content, or that Twitter uses to share tweets from people you don't follow into your timeline, and it may go some way to help explain why, exactly, you're getting certain recommended videos in your feed.

It's difficult to predict the potential impact of these additions - and whether, in fact, they'll be able to stop users sliding down the aforementioned rabbit holes that lead them to more concerning content. They could end up being helpful markers, and the capacity to search by chosen topic has clear benefits. But only time will tell if these are effective, beneficial updates for the platform.