Twitter has released its Q2 2015 results and the information presented has been met with mixed results. First up in their earnings call, Twitter's interim CEO Jack Dorsey announced that the company's second-quarter revenue rose 61% to $502.4 million, compared with $312.2 million a year earlier. That growth outpaced the social network's original projections, and beat analysts expectation, sending shares up 6% higher as a result.

But following the earnings numbers, Twitter also announced that user growth remained slow, rising from 308 million monthly active users to 316 million - with no growth in the US user base at all, the second time they've reported no US market growth. 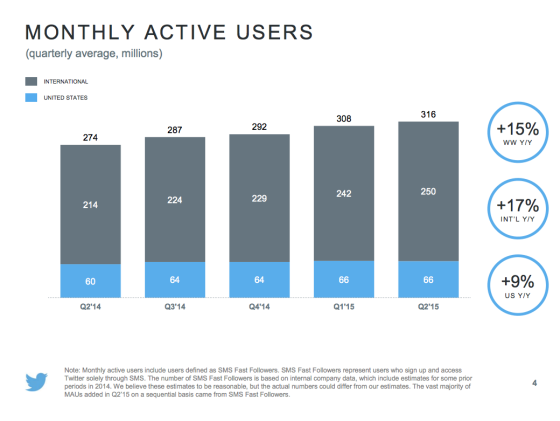 Those slowing user numbers are a big concern - looking at this data, it would suggest that Americans have stopped signing up for the service altogether, raising questions among some analysts as to whether Twitter's a must-use application, or one that will fade out.

Twitter's biggest growth in Monthly Active Users can from what it calls "SMS fast followers", people who are accessing the platform through messaging apps. From the official release:

"The vast majority of MAUs added in the 2 quarter on a sequential basis came from SMS Fast Followers. Excluding SMS Fast Followers, MAUs were 304 million for the second quarter, up 12% year-over-year, and compared to 302 million in the previous quarter. Mobile MAUs represented approximately 80% of total MAUs."

Twitter began counting SMS Fast Followers in the first quarter of 2015 - Fast Followers are essentially people who are accessing Twitter exclusively via SMS, a method through which many users in India and Brazil access the service, as well as those in emerging markets where smartphone data access is not as readily available. Twitter noted that there were 6.4 million SMS-only users in the first quarter.

Given this, the growth numbers for the company may be slightly more dire than forecast via the official numbers, but what those figures also show is that it's likely in Twitter's interests to put a focus on audience growth outside of the US in order to quell ongoing concerns about stalling audience expansion.

In expressing his disappointment about the network's slowing user growth, Dorsey outlined his plan to get the company's growth plans back on track:

The statement is in line with Twitter's recent announcements of developments like Project Lightning, which aims to showcase Twitter's strength in real-time coverage, as well as their partnership with Google, which will increase tweet exposure in-line with Google search. The reference to "more disciplined execution" likely relates to their ad products - Twitter was forced to make major changes to their direct response ads last quarter and those changes contributed significantly to their lower than expected revenue results.

But the real clincher that sent the market into sell-off mode in the earnings call was when Twitter's Finance Chief Anthony Noto said that people shouldn't be expecting significant growth any time soon.

"We do not expect to see sustained meaningful growth in MAU until we start to reach the mass market. We expect that will take a considerable amount of time."

That's a big concern, and one which analysts clearly took note of in selling down the stock.

In addressing the platform's growth concerns and ways to address them, Dorsey noted that Twitter is looking at a range of options, including the possibility of changing the way users see tweets.

"You will see us continue to question the reverse chronological timeline"

Currently, Twitter displays tweets with the latest one at the top of the screen which can make it difficult to follow, as older tweets you may have missed are down the bottom, requiring users to scroll down to see them. Reversing the chronology has been suggested several times as a way to alleviate some of the user-experience concerns - though personally, I don't see it, and I know many Twitter users would prefer that user experience is left as is. That said, it's highly likely, given this option is being mentioned in such high-level discussion, that it will be provided as an option for users, though probably not as the only option, as that may risk alienating current users.

That said, while Twitter is looking to advance and improve the platform to improve user experience, the Q2 numbers show that spending on research and development decreased from the Q1 numbers - spending was up 27% in Q1 and has been reduced to 12.3% in Q2.

Twitter still has a way to go before realizing its full potential, and its slowing user growth remains a significant concern. New ad products and its partnership with Google are positive steps, but we can expect to see more changes at the micro-blog giant as it seeks to boost its mass-market appeal. As noted by investor Chris Sacca in his detailed analysis of what the platform could do to maximize its performance, there are plenty of options to consider, and plenty of avenues to investigate. But as of right now, Twitter still remains something of an uncertain proposition, long-term. Continued revenue growth is a major positive, but what direction the company takes next - particularly amidst the loss of executive personnel and the search for a new CEO - may prove to be a key turning point for the platform.

The key numbers from Twitter's Q2 results are as follows:

Adjusted EPS: $US0.07, versus the average analyst estimate of $US0.04 in the year-ago quarter

Q3 Revenue Guidance: $US545 million to $US560 million, versus the average analyst expectation of $US555.8 million