Back in June, Twitter detailed a new project it was working on to better highlight the platform's strength in real-time events. Dubbed 'Project Lightning', the new function would aim to showcase real-time discussions on Twitter around major issues and events, using a team of curators who would create dedicated streams based around those trending discussions. And now lightning has struck, so to speak, though it's been re-named 'Moments' - and it's Twitter's boldest move yet towards changing how the service is perceived and winning over new audiences.

Moments, which is live from today for all US users (with other regions coming soon), is a whole new tab within Twitter that uncovers key discussions and events. On the desktop version, the Moments tab will be placed between 'Notifications' and 'Messages'.

On mobile, Moments will be accessible via the regular options bar at the bottom of the screen.

Clicking through will take you to a new listing of different categories of Moments collections, starting on 'Today'. 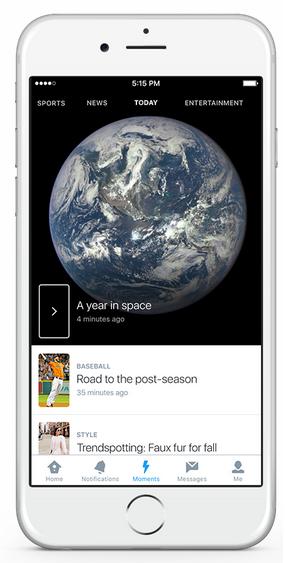 You can then scroll through and find the Moments collection you want to view which, once selected, will show you a collection of content surfaced from Twitter, Vine and Periscope on that topic. You just swipe across to go through what's on offer.

New! Find the best of Twitter in an instant with Moments: https://t.co/QAKGUSVBbT pic.twitter.com/KAjfkysVKC

As per the video, for each piece of content shown, you can favorite or re-tweet as normal - clicking through on links, though, takes an extra step (you have to click into the tweet, then click again on the link, slowing up the process slightly). At the end of your Moments stream you have the option to share the content, or click on another Moment to be taken to the next story. 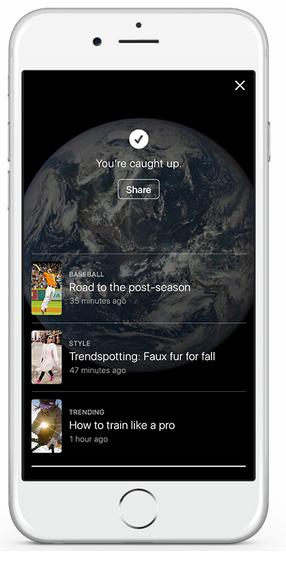 Moments will be updated in real time, which is particularly relevant for breaking news stories. When stories are updated, a blue dot will appear in the upper right-hand corner of the image associated with the Moment. There's also an option to 'follow the moment', which will bring the tweets curated for that Moments stream directly into your regular Twitter timeline for the duration of the event. Once the event's over, the tweets will stop coming through.

Mentions collections are selected based not only on tweet popularity, but are curated by a team of human editors - Twitter has a team working on Moments content around the clock to ensure the information is kept current and up to the minute. To reinforce this, Twitter has also released a set of guidelines on how Moments content is selected, underlining the impartial and data-driven nature of Moments content.

"Our Moments curation team is not responsible for driving revenue, user growth, or managing Twitter's partner relationships. We will feature Tweets in Moments and select Moments based on what best serves our audience, and not to benefit advertisers, partners, or Twitter's business interests. We will generally avoid creating Moments that cover our own industry, our company, or our competitors."

That editorial freedom will be crucial to the success of the project - if people feel relevant content is being omitted, particularly due to commercial constraints, it could undermine the whole process and turn users away. That said, Moments does have a plan to generate more revenue through the tool, and quite an interesting one at that.

The Opportunity of the Moment

Initially, as per the official release, most Moments will be assembled by Twitter's new curation team. There will be some, however, which are created by partners - initial partners providing Moments content are Bleacher Report, Buzzfeed, Entertainment Weekly, Fox News, Getty Images, Mashable, MLB, NASA, New York Times, Vogue and the Washington Post. This will enable these groups to present their own content on the Moments platform, engaging audiences in a whole new way. Branded stories will be the next phase of the project - Matt Darella, Twitter's VP of Sales, told AdWeek that instead of slipping promoted tweets into the Moments experience, Twitter's planning to create 'Promoted Moments' for brands, showcasing on-platform discussion around promotions or products.

"What it's actually going to be is a dedicated piece of real estate within the moments guide where a brand can curate a series of different tweets or Vines to actually tell their story." - Matt Darella, Twitter's VP of Sales

One example might be a film studio creating a Moments story around an upcoming film or a brand using on platform discussion to create a story around a music festival. The approach is similar to Snapchat's 'Live Story' option, which utilizes user-generated content to create a multi-perspective story around an event. And that seems like a sensible move - Snapchat has reported that Live Stories generate an average audience of 20 million in 24-hours, which equates to around $400,000 worth of ad space for every event.

Giving brands the option to create their own stories will open up a whole new way to reach people via the Twitter platform, and potentially a lot more - Twitter has previously claimed that their 'logged out' user base, those who are exposed to Twitter content but not actually active on the platform, could be more than double their actual 316 million Monthly Active User number. If they can harness even part of that audience through Moments, that'll be a significant boost in audience potential for the micro-blog giant.

However it plays out, Moments is a big step for Twitter, the first since the announcement of co-founder Jack Dorsey as their new CEO, replacing Dick Costolo after a long search. If it works out, Twitter will have a whole new way to showcase the greatest strength of the platform, as the leader in real-time events and discussion, and a whole new revenue stream, through the incorporation of branded Moments collections. As noted, Snapchat has seen significant success in this regard, and Snapchat doesn't have anywhere near the volume of content or ubiquity that Twitter has. That said, the audiences for the two platforms are very different, making a direct comparison impossible, but the potential is there. Moments could be a major step forward for Twitter's ongoing growth ambitions.