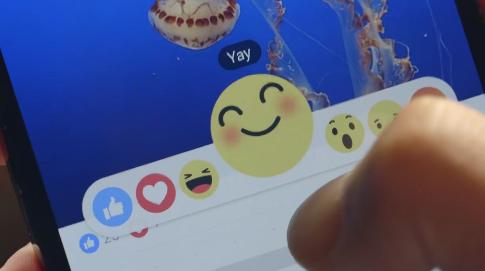 Last month, at one of his regular Town Hall Q and A sessions, Facebook CEO Mark Zuckerberg sent shockwaves through the social media community when he announced that Facebook was working on a dislike button. Except he didn't say that exactly.

What Zuckerberg actually said was:

"Not every moment is a good moment if you share something that's sad, like a refugee crisis that touches you or a family member passes away, it may not be comfortable to like that post... I do think it's important to give people more options than liking it."

While initial reports suggested that a dislike button was definitely on the way, by the next day, people had calmed down and re-assessed Zuck's actual wording, with many coming to the conclusion that it wouldn't be a 'dislike' button, as such, but more like an alternate response mechanism, possibly through emoji.

Turns out, the predictions of an emoji response were absolutely correct - today, Facebook's Chief Product Officer Chris Cox has announced, via a Facebook post, that The Social Network is launching a pilot test of 'Reactions', a new toolset which will give users a range of emoji-like ways to respond to posts.

Today we're launching a pilot test of Reactions - a more expressive Like button. As you can see, it's not a "dislike"...

The new tool will make it easier for people to express a wider range of emotional responses to updates, which is particularly relevant on mobile, where people often don't have the time to tap out their full feelings. In fact, Facebook's Director of Product Adam Mosseri told TechCrunch that part of the motivation behind Reactions was that users have already started using Stickers to respond to posts anyway, making the addition of Reactions a logical progression. 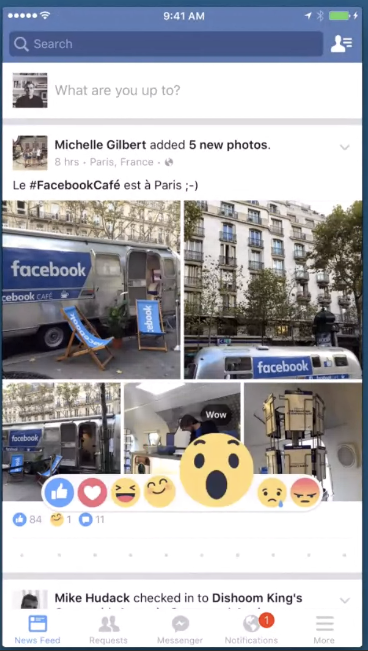 The process will also, eventually, give Facebook access to more data on user reactions, which it can then build into its already vast amounts of habitual and emotional insights that it has on each and every member, and uses for ad targeting and marketing. That data is Facebook's true strength, and obviously, one of the big questions people will have about the new addition is how these emotional responses will factored into the News Feed algorithm. Does selecting the sad icon mean you don't want to see as much of this type of content? What about angry?

Getting the jump on such queries, Facebook Product Manager Chris Tosswill has published a post on the Facebook blog which addresses exactly that - how the new Reactions will impact on the News Feed algorithm. The verdict? A Reaction, at least initially, will be treated as if it were a Like.

"Initially, just as we do when someone likes a post, if someone uses a Reaction, we will infer they want to see more of that type of post. We will spend time learning from this initial rollout and iterate based on findings in the future."

The operative word being 'initially' - obviously Facebook will be using the feedback they gather from Reactions to learn more about how users respond to content, but what those responses mean, exactly, will take a little more research to understand. No doubt experiments will be conducted on the specifics of how people react, whether there's correlations between an 'angry' response and the words people use in their comments - basically, there'll be a heap of new data to assess and analyze, and Facebook will get to know us all better as a result (just as they have since the introduction of the initial 'Like' button).

"We see this as an opportunity for businesses and publishers to better understand how people are responding to their content on Facebook. During this test, Page owners will be able to see Reactions to all of their posts on Page insights. Reactions will have the same impact on ad delivery as Likes do."

That last part is important - even if people indicate that an ad makes them angry, that'll still be counted as a 'Like', at least in the initial stages of the test. That'll mean those users that do indicate a negative response to ad content will also be increasing their chances of being shown more of the same by, effectively, liking it, which could be confusing for some, and may cause headaches for advertisers trying to maximize the effectiveness of their campaigns.

As noted, Facebook is rolling out the initial testing of Reactions in both Spain and Ireland to begin with. Why Spain and Ireland? Facebook says that it's because both have largely national user bases without extensive international friend networks, meaning they function better as closed test groups - Ireland is mostly English speaking, while Spain allows them to test responses to Reactions among non-English users.

Those initial tests will prove crucial in the wider roll-out, and it'll be interesting to see what glitches and problems arise through those first user groups (with the above mentioned response to ads being among the potential concerns).

However it plays out, Facebook's likely to take a slow and measured approach to Reactions - while everyone will be keen to try them out, it's important that they get such a major change right before expanding it to all regions.