Mark Zuckerberg Confirms That a Dislike Button is Coming to Facebook 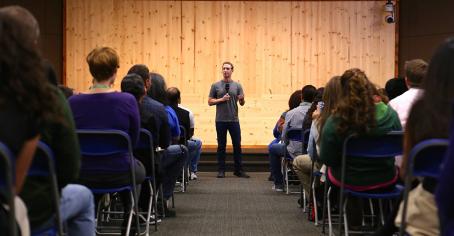 Facebook CEO and grey t-shirt fan Mark Zuckerberg has confirmed that Facebook is working on a dislike button to help people better express themselves on The Social Network. Speaking at the company's latest Town Hall Q and A session, held at Facebook HQ in California earlier today, Zuckerberg said that they were looking to bring in a dislike option not so much as an option to downvote people's posts, but as a way of expressing empathy.

"Not every moment is a good moment. If you share something that's sad, like a refugee crisis that touches you or a family member passes away, it may not be comfortable to like that post... I do think it's important to give people more options than liking it."

This is a common issue raised by Facebook users - it doesn't feel right to 'Like' a post where someone is expressing sad news, but there's no other way to sympathize or empathize via the current options (outside of commenting).

Zuckerberg flagged the possibility of a dislike button at the previous Q and A session, held back in December, saying that they'd been looking into the idea, but that they were also very conscious of what they don't want a dislike button be.

"...some people have asked for a Dislike button because they want to be able to say 'That thing isn't good'. And that's not something that we think is good for the world. So we're not going to build that. I don't think there needs to be a voting mechanism about whether posts are good or bad. I don't think that's socially very valuable or good for the community to help people share the important moments in their lives."

Effectively, they want to avoid a Reddit-style system where people can upvote and downvote posts, which might be hard to do - if you give people the option to 'vote', through liking or disliking, they're going to use it for that purpose, along with the expression of shared sentiment. Zuckerberg said the team have been working hard on creating the simplest and best way to express varying emotion on the network - which takes a lot of work to establish.

Given that, Facebook may also be testing other ways to express emotion outside of just likes and dislikes, but the only confirmed testing Zuckerberg has gone on record with today is 'dislike'. Its introduction will cause a significant change to interaction on the platform.

Testing of the dislike button should be rolling out sometime soon.