Facebook Introduces 360 Photos - The Next Step in the VR Shift

Get ready for a whole new way to share experiences on Facebook - rolling out from today, all users will soon be able to upload 360 photos to the platform.

As you can see from the video, uploading a 360 photo is pretty simple - as explained by Facebook:

"Simply take a panorama with your phone or capture a 360-degree photo using a 360 photo app or 360 camera, and then post it on Facebook as you would a normal photo. From there, we'll convert it to an immersive 360 photo that people can explore, similar to how people experience 360 videos on Facebook." 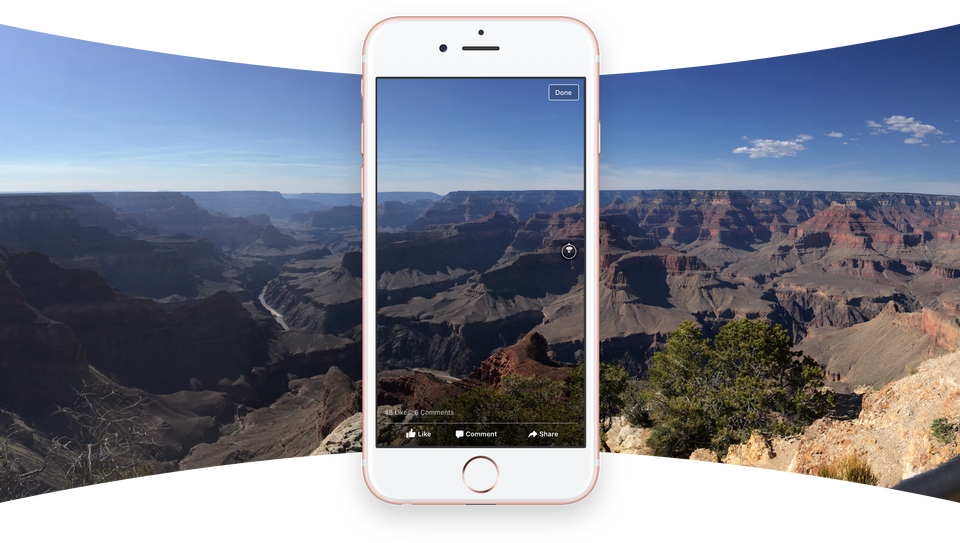 Similar to the Instant Articles lightning bolt icon, 360 photos will have a compass symbol on the right hand side of the photo, signifying that users are able to tilt their phone or drag with their mouse to see more of the image. 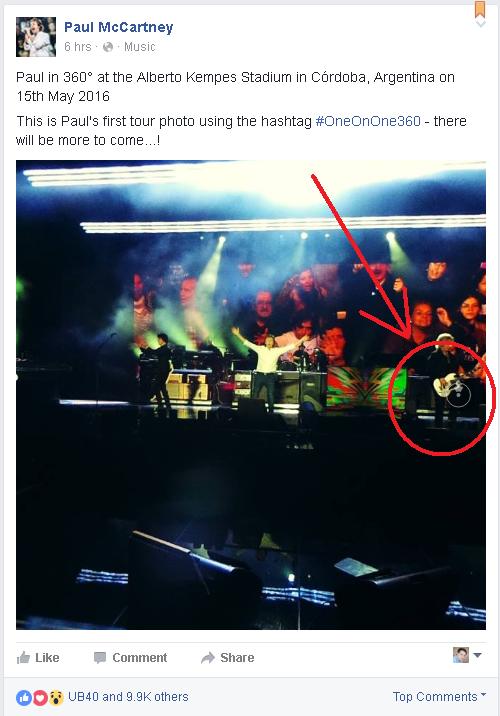 Facebook's also posted a range of examples of 360 content in action, including the above image from a recent Paul McCartney concert, a behind-the-scenes view of the Supreme Court via The New York Times, and a look inside the International Space Station with NASA.

The option opens up a whole new consideration for content creators on the platform. 360 content has been available for a while, of course, but not many people have the capacity to actually create a 360 video - the introduction of an easy way for regular users to create their own 360 content is a big step in opening the option up more widely. And while it's still not as smooth as it could be for all users (those with older phones or in low connectivity areas may have trouble getting the most out of the 360 experience), it represents another move towards the next phase of Facebook's visual journey - and as noted by Mark Zuckerberg himself, Facebook will be 'mostly video' by 2019. 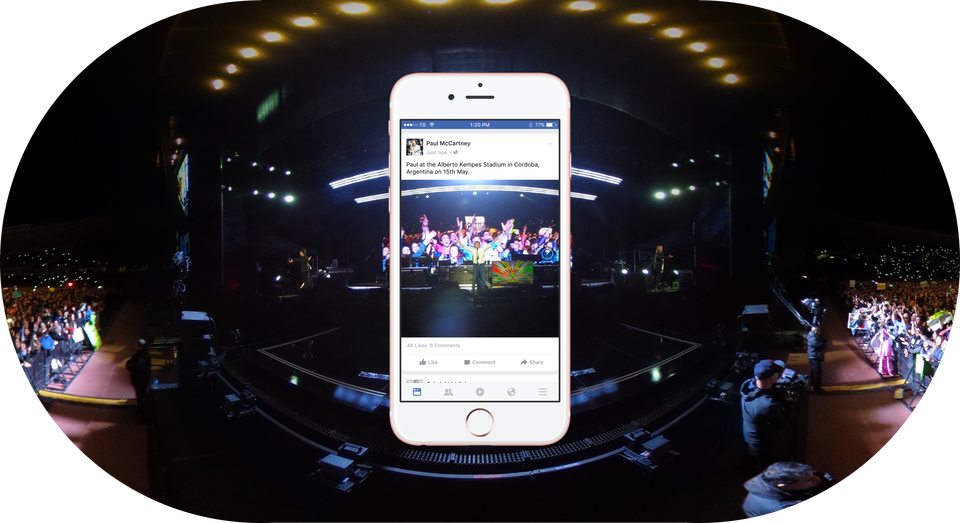 And that next evolution will change everything.

At the moment, there's a lot of talk in social media circles about immersive content and virtual reality. And yet, despite new devices and features being rolled out to enable this coming shift, it still feels a way off. Part of that, no doubt, is because of the various barriers for entry - purchasing a VR capable home system is projected to cost around $1,500 at basic level, and then you also have to factor in regional network capacity and other connective issues that could potentially hinder the experience.

But despite these concerns, VR is coming, and it will be significant. Current audience trends and data point to such.

For example, this slide from the 2014 Mary Meeker Internet Trends Report provides some scope of the rise in photo-sharing on social, with 1.8 billion photos being shared every day - and keep in mind, this was two years ago. 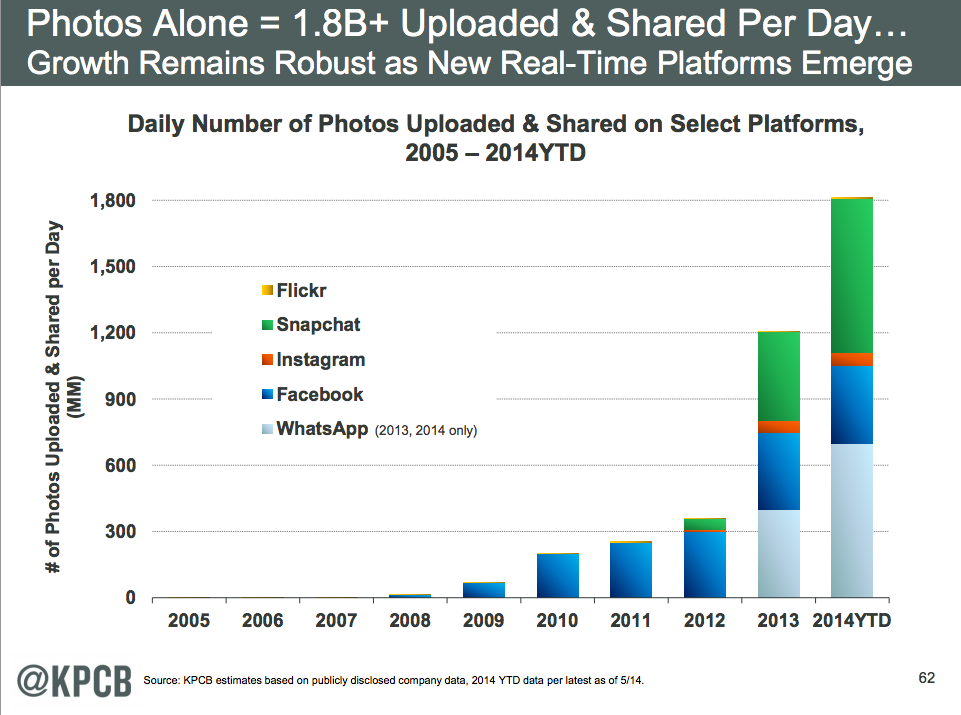 The reason more images have been shared is, basically, because we can - while text updates can convey information, an actual image provides real proof, a shared sense of experience. And that being the case, video takes it to the next level, and as technology has advanced, we've evolved from photo sharing to video - again, because we can. 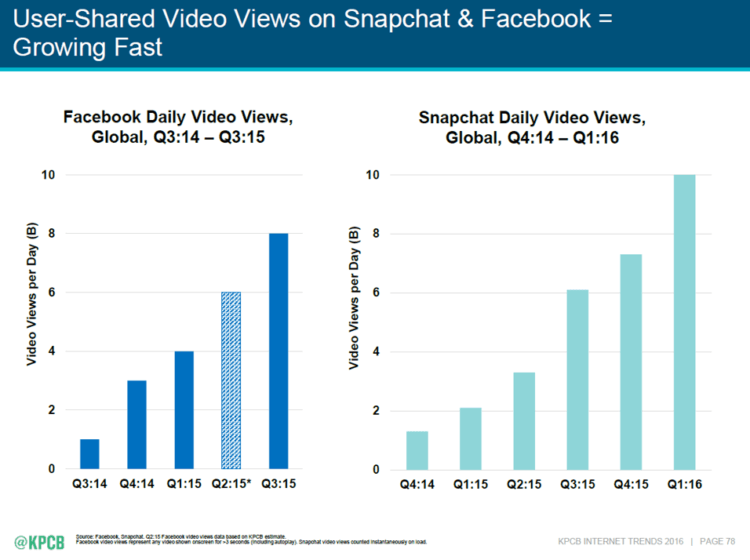 As capability increases, we gravitate towards the medium which best enables us to communicate the feeling of the moment, the best way to share our experiences with others. And going on these two trends, it's clear to see that once we have the capacity to do that in a new way, we do so - and no medium will enable us to give others a perspective on our world than virtual reality. Soon, you'll be able to provide your friends and followers with a fully immersive shared experience, with spatial audio that can simulate where each noise is coming from and a responsive interface that allows viewers to see what they want to look at.

Imagine being able to experience the NBA Finals from the front row. Imagine, as with the above 360 examples provided by Facebook, standing on stage at a concert, looking out at the crowd. Imagine floating in the International Space Station. Sure, you can look at pictures, you can even watch video - even view a 360 image, but nothing will compare to that next level VR experience. Once those barriers to entry are reduced, virtual reality will be massive - and the opportunities, on both an individual and brand level, are equally huge.

As an example of that marketing capacity, take a look at this new development from Google called Tango, which has been in development for the past three years.

Now imagine that capacity in connection with, say, Pinterest, where people could explore an item within the spatial context of their home.

Now imagine that same capacity in a fully immersive, virtual environment, not just on your phone.

As noted, the possibilities are huge.

Facebook's introduction of 360 photos is the next small step towards the next evolution of the platform, and the medium more widely.