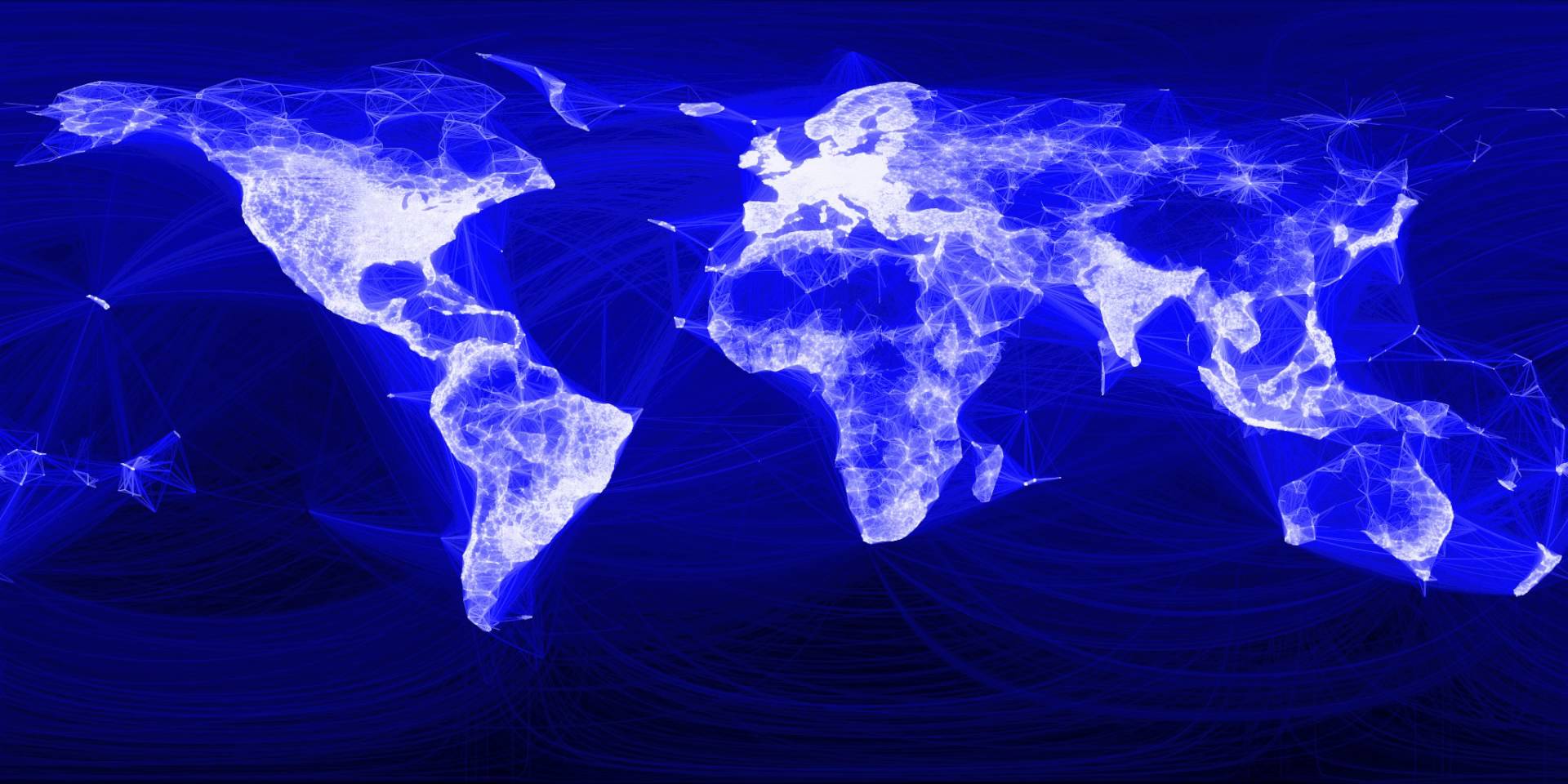 Everyone's on Facebook all the time - everyone's using Facebook to post updates and stay in touch and generally keep their connections updated on all their various life happenings, right? Well maybe not so much. Or, at least, not as much as they used to. A new report published on The Information has suggested that Facebook has seen a decline in people sharing original, personal content - which is a big problem for The Social Network, as those updates are where they're able to get the insights and data that helps fuel their ever-powerful ad targeting system. Facebook, themselves, have said that sharing remains strong, but, according to Bloomberg, "people have been less willing to post updates about their lives as their lists of friends grow".

The data published by The Information suggests that overall sharing fell 5.5% between mid-2014 and mid-2015, with sharing of personal posts - like people's own thoughts and photos - falling 21% during that period. That's enough to have inspired Facebook to put together a team to tackle what they've reportedly labeled "context collapse", with Chief Executive Mark Zuckerberg calling on staff to come up with new ways to inspire more personal sharing. This is why you've seen an increase in 'On This Day' reminders and notes about seasonal events, little nudges to get you thinking about staying in touch with your connections.

And Facebook's working on other methods to get people posting. In this week's announcement of the new features for Facebook Live, CEO Mark Zuckerberg posted his own Live video in which he answered some questions about the new functions. As part of that Q and A, he took out his own phone and opened up Facebook - and Zuck's Facebook looked a little bit different to what most users see.

When talking about how to create a Live video, Zuckerberg switched to his News Feed and tapped the 'What's on your mind?' composer window - you can see it at around the 7 minute mark below.

Live from Facebook HQ for the Live video launch!

When Zuckerberg presses the update prompt, he gets a drop down with a range of posting options - here's Zuck's screen on the right, compared to what I see when I follow the same sequence on the left. 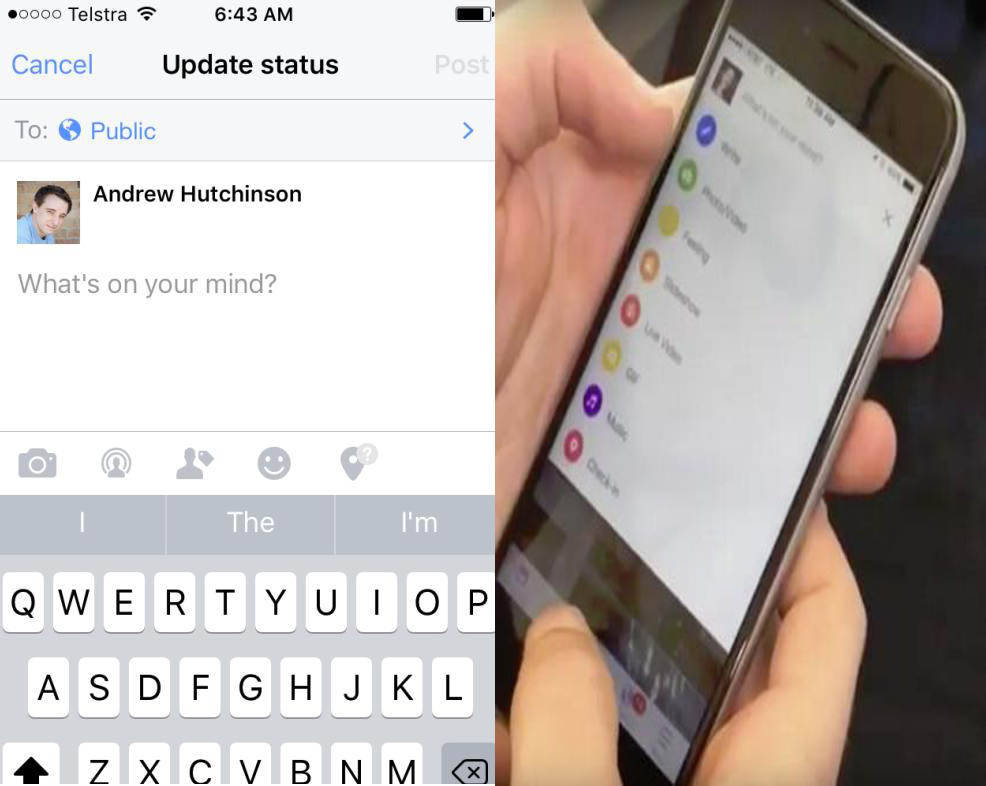 Apparently selected users are seeing the same as Zuck - according to The Verge, Facebook's been working on the new design for a few months. Nevertheless, Zuckerberg quickly stashes his phone away at that point, realizing he may have revealed too much - though, really, it's nothing major, more an interesting note on what Facebook's working on and something which underlines that the reported concerns about less sharing are likely correct.

So what are the options listed? On Zuckerberg's update screen, he has quick shortcuts to:

This adds three new options - Slideshow, GIF and Music. The new tab also doesn't default to the text prompt, which forces users to consider their choice, rather than just typing away. None of these features is overly new, though GIF search has only previously been available in Messenger, not in Facebook proper. Music Stories were introduced late last year, seeing Facebook partner with a range of music providers to stream and share snippets of songs you like with your friends, while slideshows are another twist on photos, similar to Year in Review. There's nothing ground-breaking in the design or features, but it'll be interesting to see if the update - if it does actually get rolled out to all users - prompts an increase in sharing across the network and helps Facebook reverse that decline.

But then, of course, another part of that decline is likely also due to the rise of Messenger. As people's Facebook networks expand, and incorporate more friends, workmates, former school friends, etc., a growing number of users are turning to Messenger to stay in touch with their closest connections, which, as a result, sees them posting less to their Facebook profiles. This makes sense, there's not a heap of updates that you need to share with everyone, and increasingly, Facebook seems to be becoming a place to share interesting links and content, as opposed to staying connected. As The Social Network makes more of a push into real-time news and content, less personal sharing may be a side effect - and worth noting, Facebook Messenger this week announced that they're up to 900 million monthly active users.

But even if you're using Messenger, Facebook can still track your data, right? Yes and no - personal sharing comes with additional privacy constraints and questions. If you were to talk to a friend via Messenger about your interest in a new pair of shoes, then get targeted with ads for those shoes on Facebook, your Messenger experience would suddenly feel a lot less private, and that might reduce your inclination to be as open in future. Facebook's acutely aware of this, and that no doubt plays a part in how they look to use Messenger data for ad targeting. Any such use would be covered by Facebook's Privacy Policy, but as noted, Facebook does exercise some caution about how that data is utilized (though there are some who speculate that Facebook's listening to you, all the time, via your phone's audio input and using your real world conversations to target you with ads, a claim Facebook as denied on several occasions).

Either way, Facebook's not necessarily short on data, though if the reported decline in sharing becomes a trend, it may pose some future difficulties. While Facebook remains technically free to use, the price you actually pay is in the information you provide, and those insights are Facebook's real money maker, what they use to stay ahead of the competition and build their ultimate ad platform. As such, they need to maintain that information flow, so you can expect updates prompting people to share more to continue as Facebook looks for new and interesting ways to engage their audience.

Overall, it's likely a lesser concern for Zuck and Co, given their overall growth, but it does provide some context into why they might be developing new information tools and looking at ways to prompt people to share.