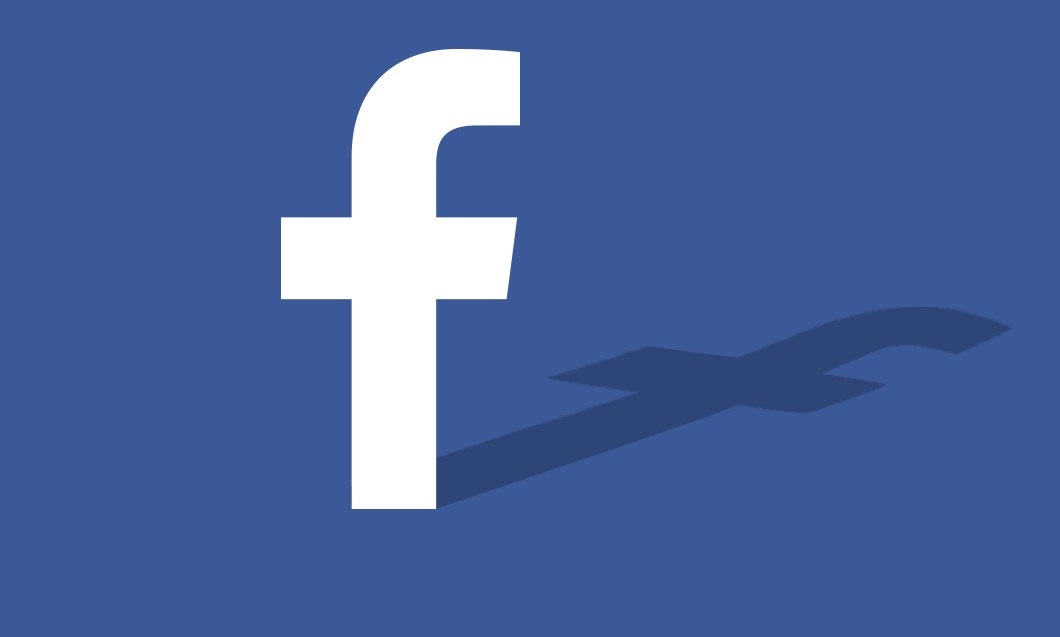 Gradually, it seems, all social networking functionalities are merging, with similar options and tools being re-purposed, re-used and re-imagined across the leading apps. But more than that, in Facebook, we're also seeing a more wholescale assimilation, a gradual evolution towards dominance of all aspects of social networking.

This is most evident in Instagram - by taking over Instagram back in 2012, Facebook clearly flagged its intentions to own the social space in its entirety. Instagram was on the rise, Facebook detected the potential threat, Facebook bought it out, eliminating the concern. This was reiterated in 2013 when Zuck and Co. made an offer to purchase rising social app Snapchat - an offer that was famously rejected. This moved Facebook to Plan B, duplicating the app's core features and using its massive scale to advantage.

Snapchat, as a case study, is fascinating to watch from this perspective. In cloning and bullying Snapchat, Facebook's sending a clear message to other would be rivals - you come for our audience and we'll take you out. Of course, that's not a lot different from any smart business strategy - you work to beat your competitors in any way you can in order to maintain and improve market share. But Facebook has been so blatant in their mission, so obvious in their duplicates. Yet, there's nothing anyone can do about it.

And Facebook's now slowly integrating new tools that will keep users within Facebook's walls for longer, further expanding their dominance in the social space.

As reported by TechCrunch, Facebook has quietly introduced a new option within the main function bar of the Facebook app which enables users to switch across to their Instagram profile, all from within Facebook itself. 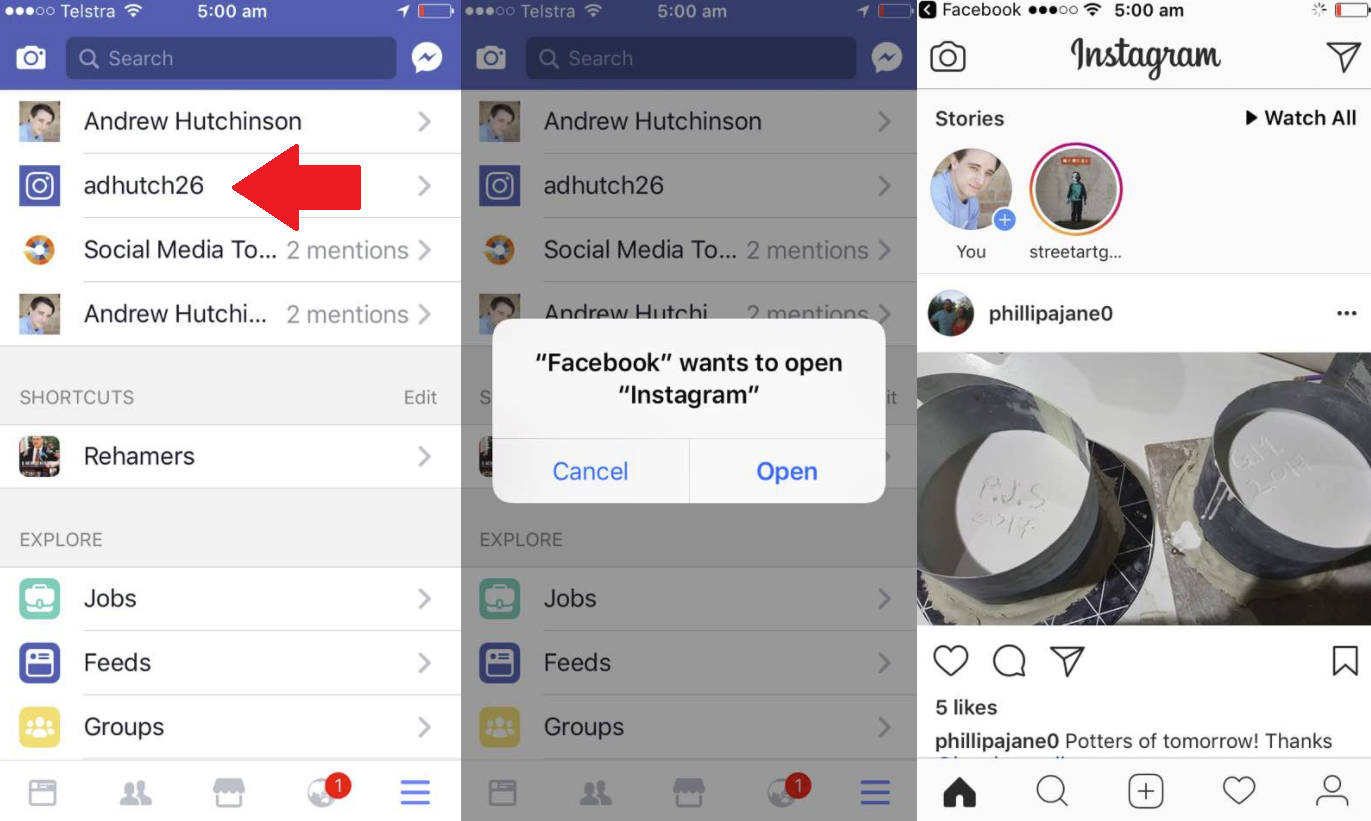 Now that's not ground-breaking, not everyone's going to suddenly use this functionality, changing the overall Facebook engagement rate overnight. But it's the latest in a set of integrations which are slowly merging and expanding Facebook's net, and keeping users within their boundaries for longer and longer.

Facebook's also been experimenting with showing your Instragram photos on your Facebook profile, and a notifications system for all three within the main app. 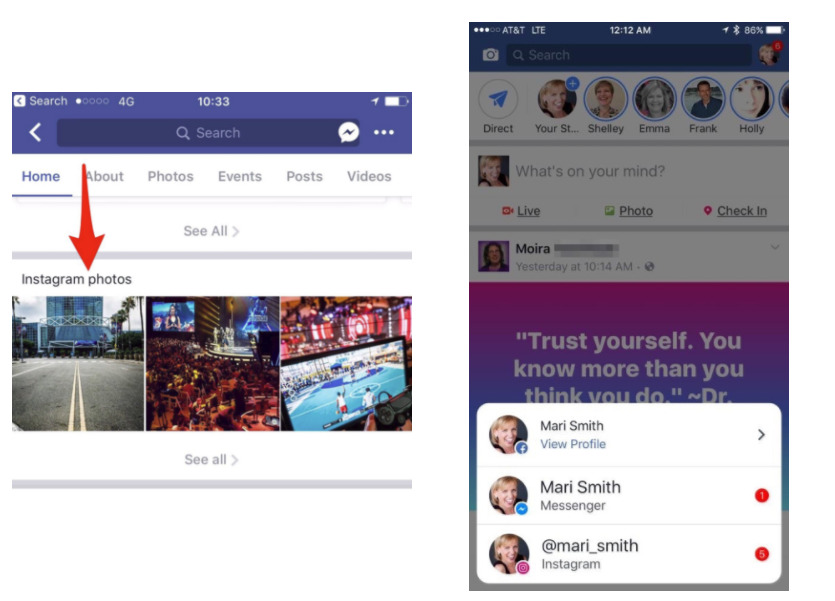 As these tools and functionalities merge, Facebook, essentially, expands. This may not be as significant to existing users, but for new users who come on-board, the division between the apps is becoming less discernible over time. In the same way that users of Facebook's Free Basics web services in less-connected regions have associated Facebook with being the internet itself - because it's all they've ever known - incoming users will see Facebook and Instagram as one, giving Facebook more market advantage, and boosting simplicity and appeal.

These may seem like small advances, but each one is significant in its own way - and becomes more relevant with each new advance. Worth noting too that Facebook's also targeting LinkedIn, YouTube, Houseparty - even Google, to a degree. These initiatives aren't as overt as their duplication of Snapchat, but still, they are clearly present, they're all happening, all are in some level of progress. And as The Social Network advances, and learns how to better challenge and assimilate rival businesses, its threat level grows, which will likely scare many potential rivals into re-thinking their plans.

It may seem relatively minor, but all these little moves push Facebook further forward in their wider mission and growth.

Is that a good thing for social media more broadly? It's impossible to say, but what we can predict with some confidence is that it's going to happen. Whether you like it or not.