For many Facebook Page owners, the organic reach of posts is one of the most frustrating and hard to understand metrics to deal with. While it's not the be all or the end all for marketers, that little number, always so visible when you're on your Facebook Page, has a way of captivating us all. And when it doesn't get as high as we expect, as has been the case for many these past few months, we're left to question our methods.

Turns out, it's not just you.

According to a recent study of over 3,000 Facebook Pages, conducted by SocialFlow, publishers on Facebook have seen a pretty dramatic drop in reach over the last couple of months.

When you first glance at the chart, it looks as though the reach of those posts has been fairly steady since the initial drop in January, hovering around 36 or 37 billion. 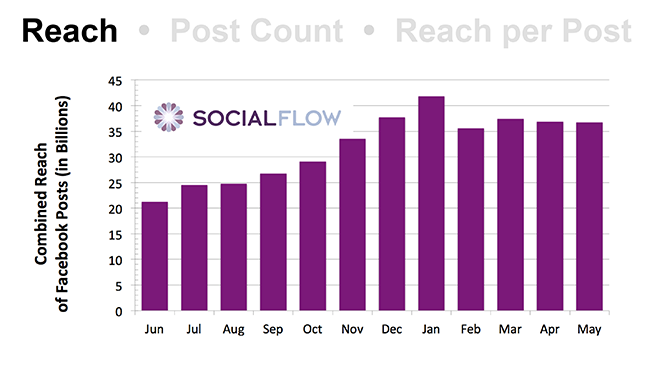 Where it gets interesting is when you look at the volume of posts - while reach has remained steady over the last four months, posts have gone up over 30%. More posts should equal more reach, right? 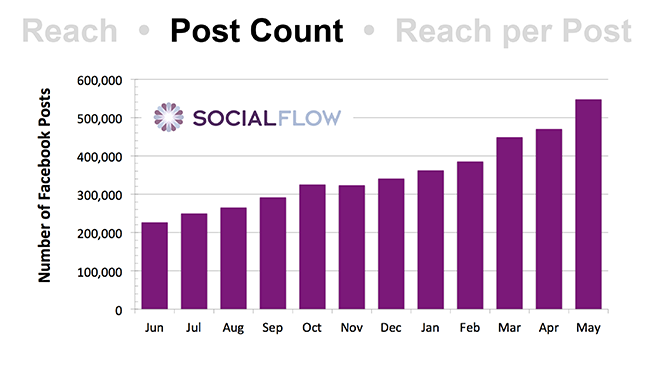 Wrong. As you can see from this third chart, the study found that posts in May reached an average of 68,000 compared to 117,000 in January, a notable drop off for such a short period of time. 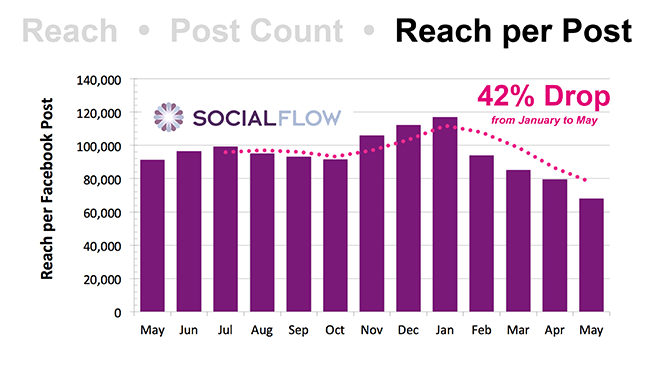 SocialFlow's CEO, Jim Anderson, argues that this is more than coincidence and that there may have been an algorithm change we weren't aware of.

"Facebook's constantly adjusting its algorithms up and down to tune the user experience," he said. "Back in the fourth quarter and through January, media companies were doing phenomenally well. Then Facebook made a change to the algorithm."

While there's no definitive reason for what caused the change to the algorithm, there are a number of possibilities. Mr. Anderson said Facebook might have prioritized posts from individuals to try to reward them for sharing more personal stories on the network, as reports said the company was worried people were writing less about events or thoughts from their own life. He went on to say that it could also have been a way for Facebook to re-calibrate the algorithm so people's feeds didn't feature several articles from the same news organization consecutively and to prioritize video.

While Mr. Anderson doesn't think Facebook is necessarily doing anything maliciously to hurt publishers in favor of others, he said there's no denying that the results aren't rosy.

"I think these algorithms are a bit of a dark art to many people," he said. "We think it's important and we're excited to provide some visibility to what's going on. Because even when you can't control it, knowing what's happening and understanding how your volatility compares to the rest of the industry or similar publications lets you run your business more effectively."

It's important to keep up to date with these kinds of changes to Facebook's algorithm, but it's even more important that you're constantly watching your own metrics and testing what works best for your brand. Just because an algorithm makes reach go down for some, doesn't mean it has to for you.