Last September, Pinterest reported that it had reached the milestone of 100 million monthly active users. And while, comparatively, that may not seem like much - Facebook has 1.71 billion MAU - as highlighted by Pew Research, Pinterest usage is actually increasing at a significantly higher rate than most other platforms. 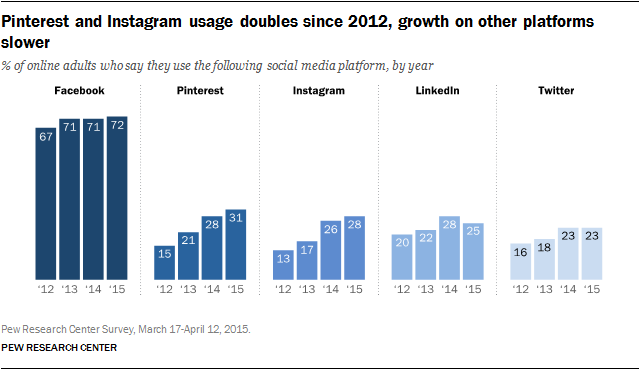 While the bigger platforms get more hype, Pinterest has slowly, but surely, been establishing their place in the social sphere, with ambitions to be generating $2.8 billion in annual revenue by 2018. And today, Pinterest has reported its latest growth achievement, reaching 150 million active Pinners - a 50% expansion in audience from 12 months ago. 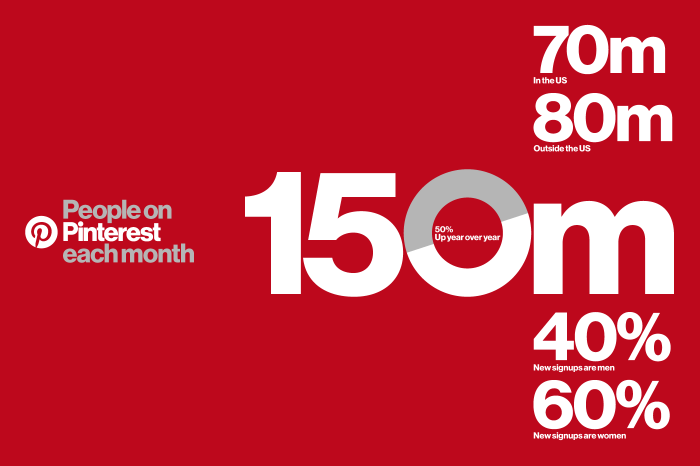 As you can see from the side notes, along with that MAU increase, Pinterest is also reporting that:

Those are some compelling stats, reflective of the ongoing efforts of the Pinterest team. Within the past 12 months, for example, the platform has improved its buyable pins (there are now more than 60 million buyable Pins on the site) and added advanced image search capabilities, while also upgrading their mobile app and providing new advertising options like remarketing and custom audience tools (including new elements added just this week)

At the same time, part of the platform's evolution has also seen Pinterest moving away from being a 'social' network and more towards an eCommerce solution. That's not a bad thing, but the focus of the platform is, over time, drifting further away from the social element and more towards facilitating consumer interaction with brands. That shift is also evident in the numbers - 75% of all saved Pins now come from business boards.

The change in focus has also been underlined by Pinterest's management - CEO Ben Silbermann describes the network as a place where people go "to find ideas" as opposed to seeing what your friends are doing, while the company's broader ambition is to create a platform "with the scale and engagement of Facebook and the purchasing intent of Google".

It's clear that Pinterest sees itself as something other than a social network, but then again, that framing may also have something to do with market positioning. Pinterest, eventually, is expected to go public, and doing so as a social network will inevitably see them compared with Facebook, something that other social networks - Twitter most notably - have struggled with. But changing their definition could help avoid such comparison - Snapchat has recently taken a similar tack, with Snap Inc. listing itself as "a camera company" not a social networking app.

Among other details released by Pinterest, the platform says it now serves 10 billion recommendations per day to users - the equivalent of 3 trillion a year - while more than 150 million visual searches are conducted monthly. Pinterest also says there are now more than a million businesses active on the network, with "tens of thousands" now utilizing their paid ad options.

It's a good report card from the Pin network - if your brand has never considered Pinterest, particularly if you're a B2C, the platform is definitely worth further investigation.

A hundred and fifty million people, innovative search and discovery options and improved advertising tools. There's a lot to like about the growing world of Pins.