However you might feel about Facebook, the numbers show they're clearly on the right path. The Social Network has today released its Q2 numbers, and they are, once again, strong all round.

First off, on active users - Facebook increased its Monthly Active User (MAU) count to 1.71 billion, an increase of 15% year-over-year. 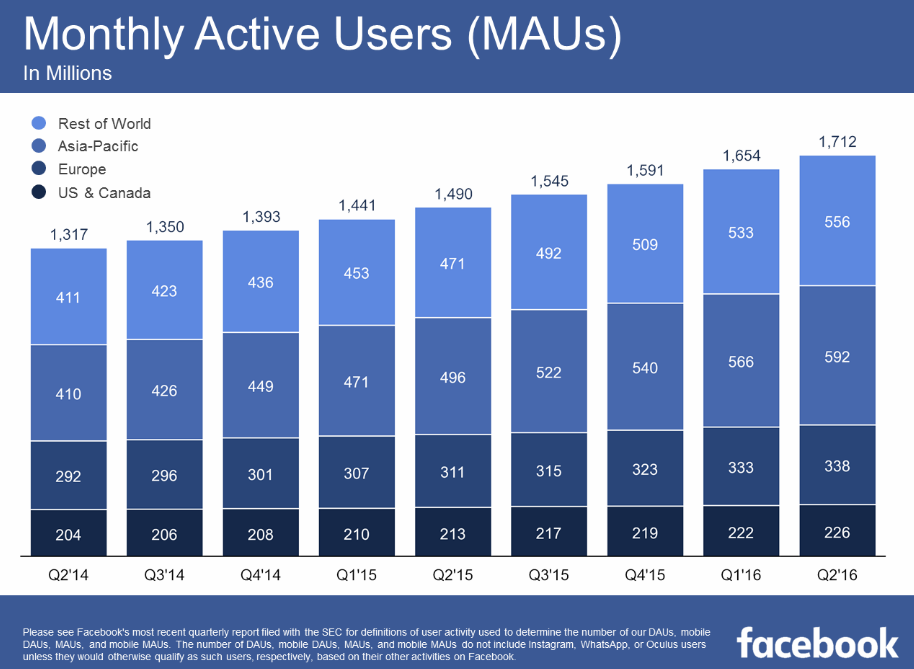 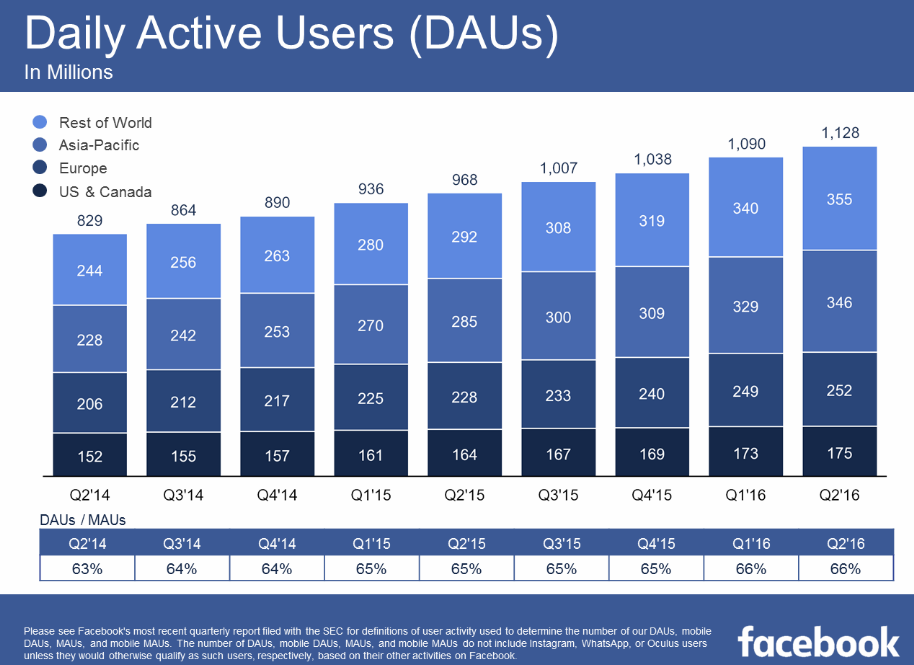 That means puts the DAU/MAU ratio almost flat (66%) - so while Facebook continues to grow its user base, those users remain actively engaged, with more people logging onto the platform every day.

Mobile DAUs, meanwhile, have crossed the 1b threshold for the first time. 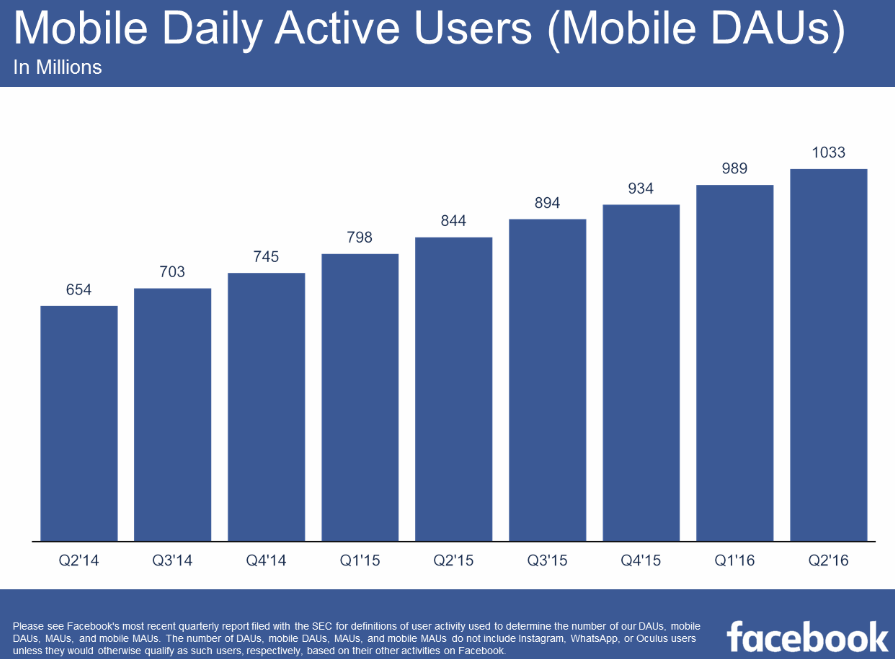 And while it's obviously been going that way for some time, it's still an important milestone - now, more than 91% of people who log into Facebook daily do so via mobile device. If you're still questioning the relevance of mobile, or if you haven't considered how people are accessing your content, now's the time to do so.

Further supporting this, Facebook's Mobile-Only MAUs - those people who only ever access the platform via mobile device - are now also encroaching on that 1b figure. 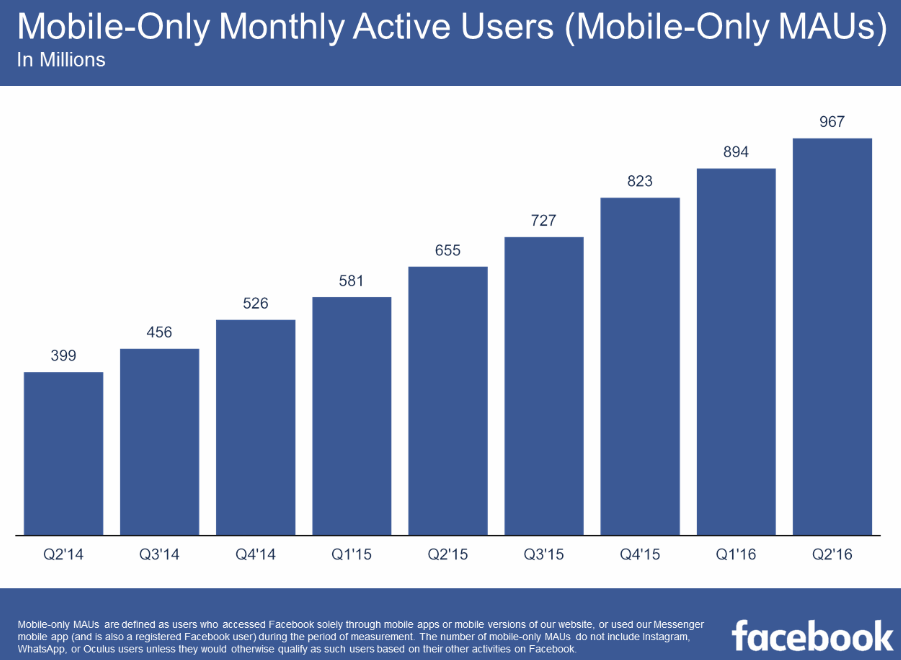 Worth noting too, 84% of Facebook's advertising revenue came from mobile.

Looking more specifically at the revenue figures, Facebook posted $6.44 billion for the quarter, up 59% year-over-year. 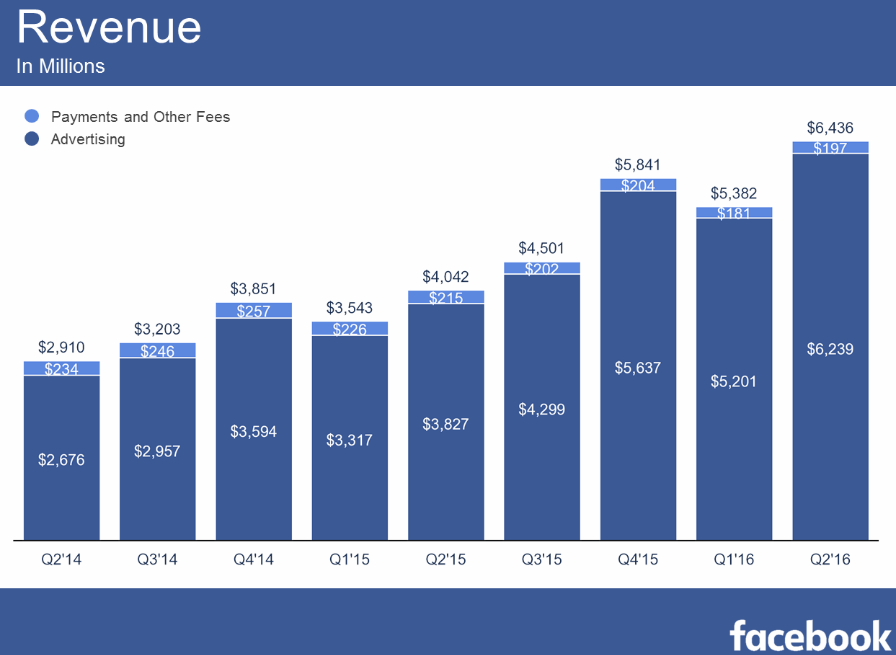 Interestingly, Facebook saw the biggest revenue increase for the quarter in the 'Rest of the World' bracket, posting a 29% improvement on their Q1 numbers (Europe was the next highest). 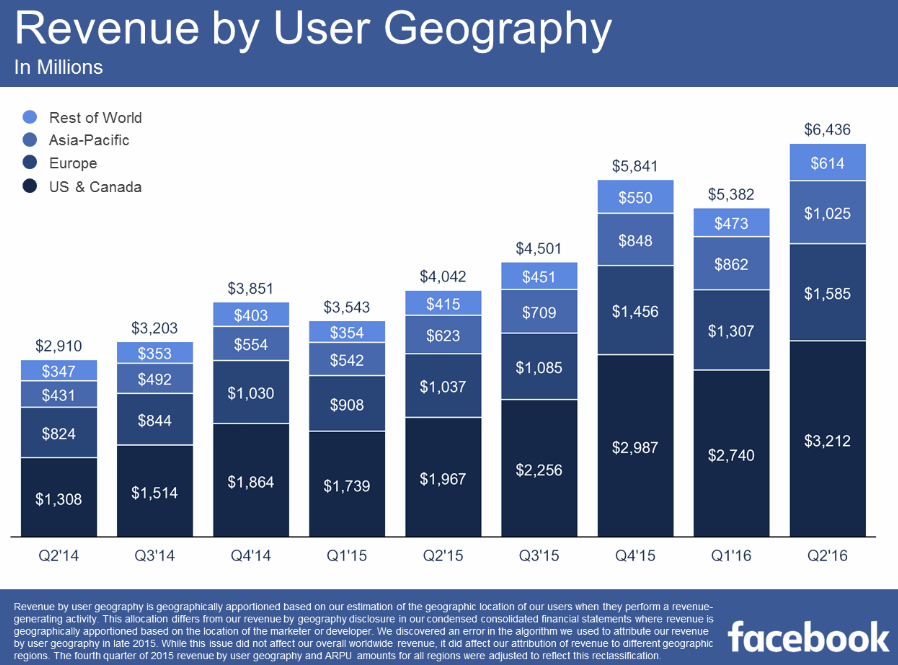 That could be a sign that Facebook's internet.org efforts are paying off, as the company pushes further into regions where they've previously not had any presence. Facebook says more than 25 million people have already been connected to the internet because of the project, and many of those would be categorized in the "Rest of the World" category.

Average revenue per user also increased to new highs in every region. 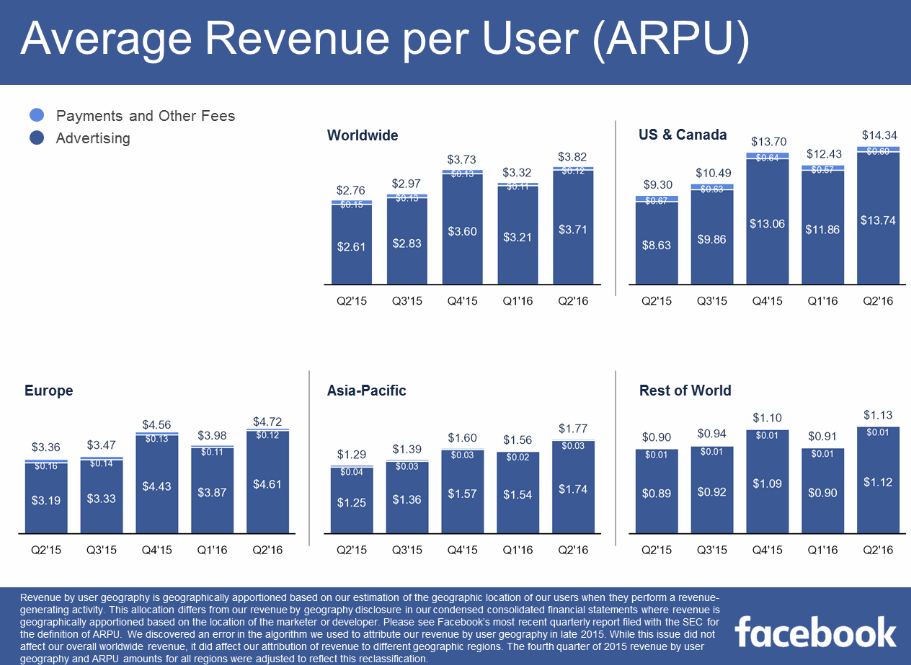 The results sent shares to a new all-time high in after-hours trading.

Really, when you consider the various storylines and reports that have come up during the quarter, it's amazing to see Facebook continuing to go from strength-to-strength. There were reports of bias in Trending Topics, the constant threat of Snapchat, the introduction of Instagram's algorithm. All of these have had little impact on Facebook's growth and engagement. This is especially impressive when you compare Facebook's user growth - up 58 million total MAU - to Twitter's numbers reported yesterday, where they reported a total increase of 3 million active users. Facebook's obviously significantly bigger than Twitter, which should put them closer to saturation point, yet the platform continues to grow at an amazing rate.

In the accompanying earnings call, Facebook noted that they're close to reaching the peak ad load that they can show to Facebook users, which will mean they need to look elsewhere for future revenue options. This will mostly come from live TV content, a front on which Facebook has making big strides of late.

COO Sheryl Sandberg, meanwhile, noted that that there are now more than 60 million monthly active business Pages on Facebook, though only 3 million of them are active advertisers, which presents another opportunity. In addition, more than a billion messages are being shared each month between people and businesses, underlining the rising potential for brand content on Messenger.

And another interesting note, CEO Mark Zuckerberg said that Facebook's now seeing more than 2 billion searches on the platform every day - a jump from the 1.5 billion searches per day they reported at the same time last year. This is a big area of opportunity for Facebook, and Zuckerberg noted that they are looking to translate search into a revenue generating product by enabling brands to get involved.

Zuckerberg said that Facebook has three-stage strategy for such monetization, a process he also noted in the most recent Facebook stockholder meeting.

The three stages of the process are:

Zuckerberg says that search is currently in the second phase, and they'll be looking to advance the product further in the near future. If it works out, Facebook could be sitting on another gold mine, and another way to steal attention away from other platforms reliant on search and discovery - most notably Google and Twitter.

The numbers also reflect that more people are searching for more information on The Social Network, rather than going elsewhere, which may provide an additional motivating factor for brands to maintain an active Facebook presence.

Overall, its another stellar report card for The Social Network, showing that the platform is adjusting and shifting in line with user expectation.