Vine Confirms the End is Nigh, Transitioning into New 'Vine Camera' App

Back in October, following the release of their Q3 results, Twitter announced it would be closing its 6-second video app Vine. The social media community responded with both frustration and sadness, with some suggesting that Twitter could have done more to save the app - and for a time it seemed like Vine might actually be rescued, with rumors of discussions between Twitter and potential buyers for the tool. But those rumors have now proven to be just that - today, via the official Vine blog on Medium, the team have confirmed that Vine is shutting down in January.

In the post, the Vine team confirm that users can now download all their Vines, with the app's latest update adding a tool to simplify the process.

But in January, things will change, with Vine becoming essentially a Twitter tool called 'Vine Camera'.

"In January, we're transitioning the Vine app to a pared-down Vine Camera. With this camera app you'll still be able to make six-second looping videos, and either post them directly to Twitter or save them to your phone."

So Vine will live on, kind of - you'll still be able to create Vines and post them to Twitter, or save them to your camera roll, but all other functionality of the Vine app will be gone. That means Vine profiles, saved Vines (though they'll remain in your tweets), and extra Vine effects and tools will all be gone, or at least, they'll become inaccessible for editing purposes. You'll only be able to create 6-second videos that live on Twitter or on your device, similar to posting any other photo or video content - though they will loop the way Vine videos do now.

And an important note - all of the Vines that exist will live on at the vine.co website, you just won't be able to download them anymore once the app transitions into Vine Camera.

In terms of what Vine creators should do, Vine's clarified the details further with a dedicated FAQ page on the transition.

The main key note is that if you want to download your Vines, you should do it now - the latest Vine update (v 5.43.0) makes this easy to do.

And while you can't transfer your Vine followers across to Twitter, Vine's looking to re-direct your audience to your Twitter presence with a new prompt which will appear on accounts which are connected to a Twitter profile. 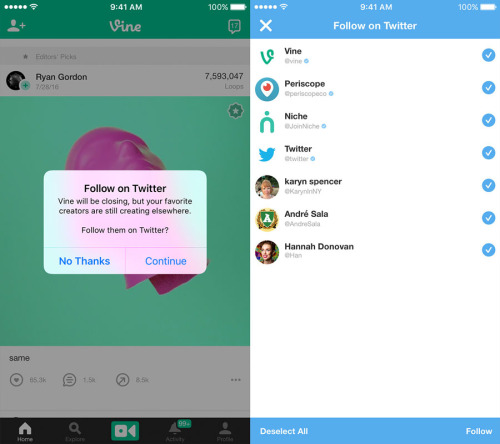 The update feels a little strange. On one hand, it's sad that Vine's going, but on the other, the new tool sounds very similar - it's Vine without the dedicated platform. But really, Vine's popularity relied on its Twitter connectivity anyway, so it's possible that Vine functionality could remain a part of the eco-sphere - you'll still be able to post Vine-like content, you just won't have a Vine profile to refer to.

Of course, it's hard to say exactly how this will work without seeing the new Vine Camera app in action, but it seems like less of a loss knowing that something of Vine will remain.

But then again, these types of tweets from the Vine account are a little sad.

Remember when, @ShawnMendes? Thank you for being a part of Vine's journey! https://t.co/qhG2WvTYfE

It's a confusing time, with many mixed emotions.

There are more details on the specifics of downloading and keeping your Vine videos and details here.

UPDATE: Vine has confirmed that Vine will transition to 'Vine Camera' on January 17th.

Update - the Vine app will become the Vine Camera on Jan 17. Please download your Vines before then! More here: https://t.co/zrE1oDTx48