Twitter has announced their Q3 earnings results, along with a raft of job cuts to help improve the performance of the company. 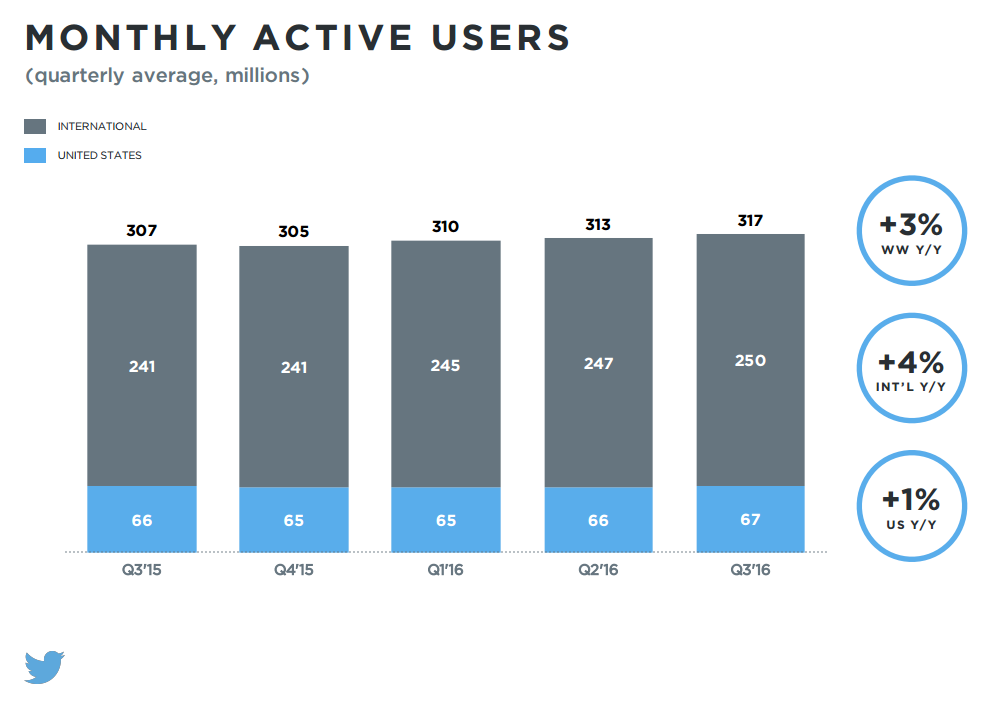 That's another positive result on this front - in their Q2 numbers, Twitter improved their active users by a similar amount, showing small, but steady, progress.

Twitter also highlighted that the daily active growth rate is on the rise, demonstrating that their re-invigoration efforts are paying off. 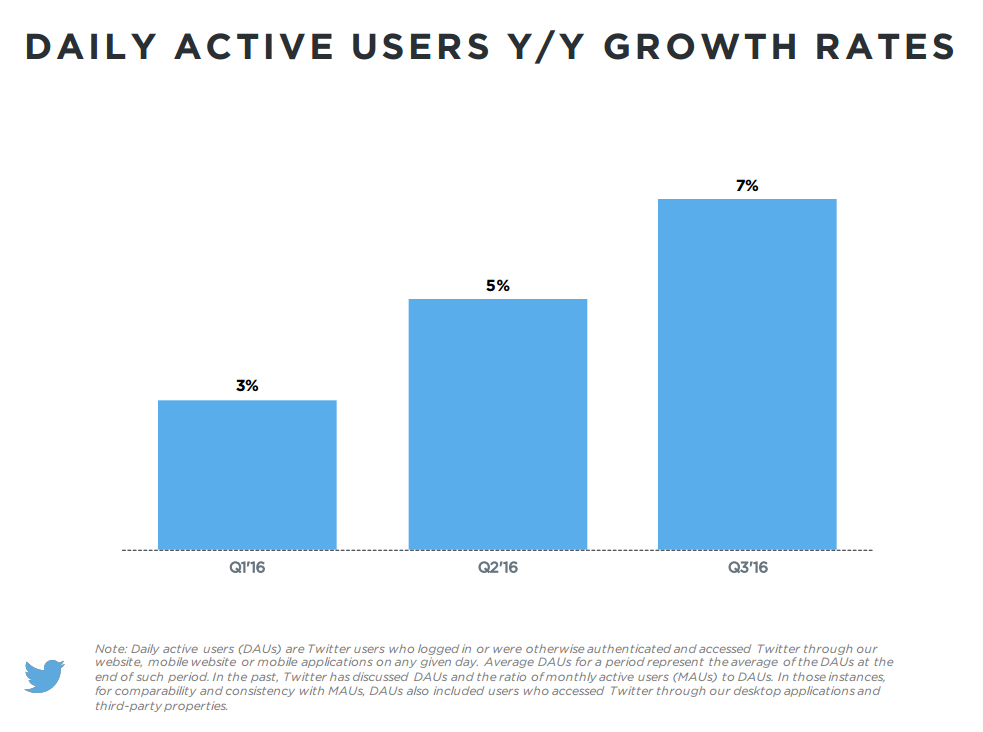 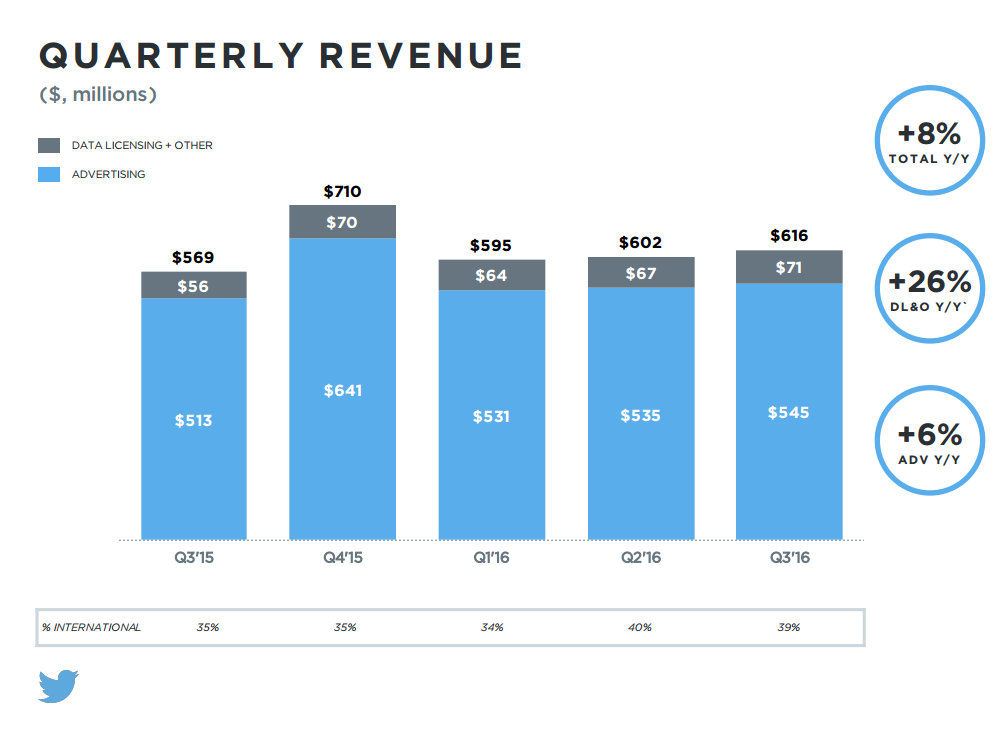 Again, another positive sign - nothing huge, but improvement nonetheless.

Twitter's attributed the better than expected results to product improvements which have had "a direct, positive impact on audience growth, engagement and monetization". Twitter also noted that they saw accelerating growth in daily active usage, tweet impressions and time spent, all good signs for the troubled platform, while they also highlighted their evolving machine learning efforts to improve the user experience.

But the bad news, particularly for those within Twitter, is that the company has also announced a new round of lay-offs.

As per Twitter's shareholder letter:

"The Board of Directors of the Company approved a restructuring and reduction in force plan of up to approximately 9% of the Company's positions globally. The restructuring will allow the Company to continue to fully invest in its highest priorities, while eliminating investment in non-core areas and driving toward greater efficiency."

Reducing their staff is seen by many analysts as a necessary step for the company - one of the reasons some potential suitors have walked away from the platform has been due to the over-arching costs associated with the company. These reductions will work to alleviate that concern and streamline their efforts towards the next stage of their re-invigoration.

The better than expected results certainly came as a surprise to many - earlier this week, Twitter announced the re-scheduling of their Q3 earnings call to the "pre-market" hour of 4am, which immediately raised eyebrows amongst tech observers.

As noted in the tweet, the reason given for the re-schedule was to avoid conflicting announcements - both Alphabet (Google) and Amazon are also announcing their results later today.

The results shown that Twitter's re-ignition efforts are paying dividends, even if it's taking longer than they would have hoped. The platform has been working hard to turn things around, but most of their efforts on this front have seemingly fallen flat, or, at least, failed to live up to hopes and expectations.

They introduced 'Moments' in October last year, which they hailed as a "bold change" in how people consume tweets. But thus far, Moments has failed to gain any significant traction, and reports are now circulating that Twitter's looking to remove the Moments tab and replace it with a new option, either called "Happening" or "Explore".

Looks like @twitter is swapping the "moments" tab with a "happening" tab. Has live video, trends and then moments. pic.twitter.com/TdAvarHel3

They've sought to simplify the tweet process by loosening the 140 character limit, removing image attachments from the count and changing the conventions around @replies and mentions. But the impact of those changes is also questionable, with the last of them only now coming into effect despite being announced back in May.

And they've also, most controversially, introduced an algorithm which aims to show users tweets they may have missed but would likely be interested in. Really, that process has been quite good, and it's been great to see Twitter leaning more in their data and insights to better personalize and tailor the on-platform experience for each user, but because the algorithm is limited to only a few elements - showing you the best tweets from while you were offline and improving your "Who to follow" recommendations - again, the impact on the user experience has been minimal. Their advancing efforts on machine learning may see this extended in future.

But of course, live video is where Twitter is placing its biggest bets.

Live-streaming, headlined by their exclusive NFL rights deal, feels a little like their "Hail Mary", their one last play to win the big game, and so far Twitter has made all the right moves. Initial feedback on their NFL broadcasts has been strong, while live-streaming viewership has grown with each of the US Presidential Debates.

The 2nd & 3rd Presidential debates averaged a reach of 3.3M unique viewers, up >30% over the 1st debate. #TWTR

On this front, Twitter also noted that they saw record DAU levels in the U.S. during all three debates - that's not live-stream viewers, but active users on the platform, underlining the platform's importance in the public discussion of such events.

They've also introduced new tools and options to bring more creators to the platform, including improved Vine and Periscope integrations and updated monetization options to better compete with YouTube and Facebook.

But then there's the big problem on which the platform has, as yet, been unable to show any demonstrable progress - that being their ongoing battle with trolls and abuse.

The issue came to a head again in July when actor Leslie Jones announced she was quitting the platform in the wake of repeated personal attacks - which sparked CEO Jack Dorsey to respond personally to help rectify the issue.

Since then, Twitter's introduced a new Quality Filter tool, which uses an algorithm to detect and eliminate questionable tweets from your timeline, and other options to give users more control over what they see, but the issue remains a significant concern. The problem's so big that it's reportedly the reason that several potential buyers, including Disney, have withdrawn their interest. It'll be interesting to see what their next move is on this front.

Overall, it's a positive earnings result for the platform. Lay-offs are never a great outcome, but in this case, they may be necessary to advance the company's ambitions and improve their overall performance.

The biggest thing Twitter needs is obviously growth, and they have shown that in these figures, even if it is only small. If the company can slim down their staff and continue to build on those numbers, they may be able to (slowly) get back on track - the question then is whether the market will have the patience to stay with them. Live-streaming is also showing promise, and you can expect more movement on the front.