It's no secret that the car has always been a status symbol, and is even seen by some as an extension of their character. Are you a BMW or an Audi person? Are you about fuel efficiency or speed? Are you trying to wow onlookers or are you just trying to get your family from A to B?

From a marketing and PR perspective, with over 95% of vehicle shoppers now using digital channels to research cars, social is pivotal. It's become a virtual showroom for the world to see the latest products on the market and what's coming in the future.

But as with many industries, the automotive sector is starting to experience the kind of disruption that's seriously altering the status quo. BMW, Ford, Mercedes, Volkswagen, Toyota and other auto stalwarts are seeing challenges from a new generation of electric and soon autonomous vehicles - from relatively new brands like Tesla to non-automotive brands like Google and Apple.

That's we at Talkwalker decided to do a deep dive into the automotive industry on social media for our latest report, to see who's racing to the front and who's getting left in the dust. And our research uncovered one story, in particular, that stood out.

Tesla - The Social Media Darling of the Car Industry

There are many different facets of our report that I think merit discussion, but for me, the most fascinating is the incredible strength of Tesla from a social media marketing perspective. Here's a brand that was founded just fifteen years ago, makes comparatively little money relative to automotive giants, yet on social media, they are in the top three - outperforming Volkswagen, Ford and Toyota, to name but a few.

This is pretty staggering - we've done a great deal of industry social media analyses in our time and as a general rule, bigger companies tend to outperform their smaller rivals. There are exceptions of course, but for a company that's almost 30x smaller than its rivals, to perform so well is pretty much unheard of.

Below is a graph showing the total mentions across social channels of twenty-nine of the world's biggest car brands: 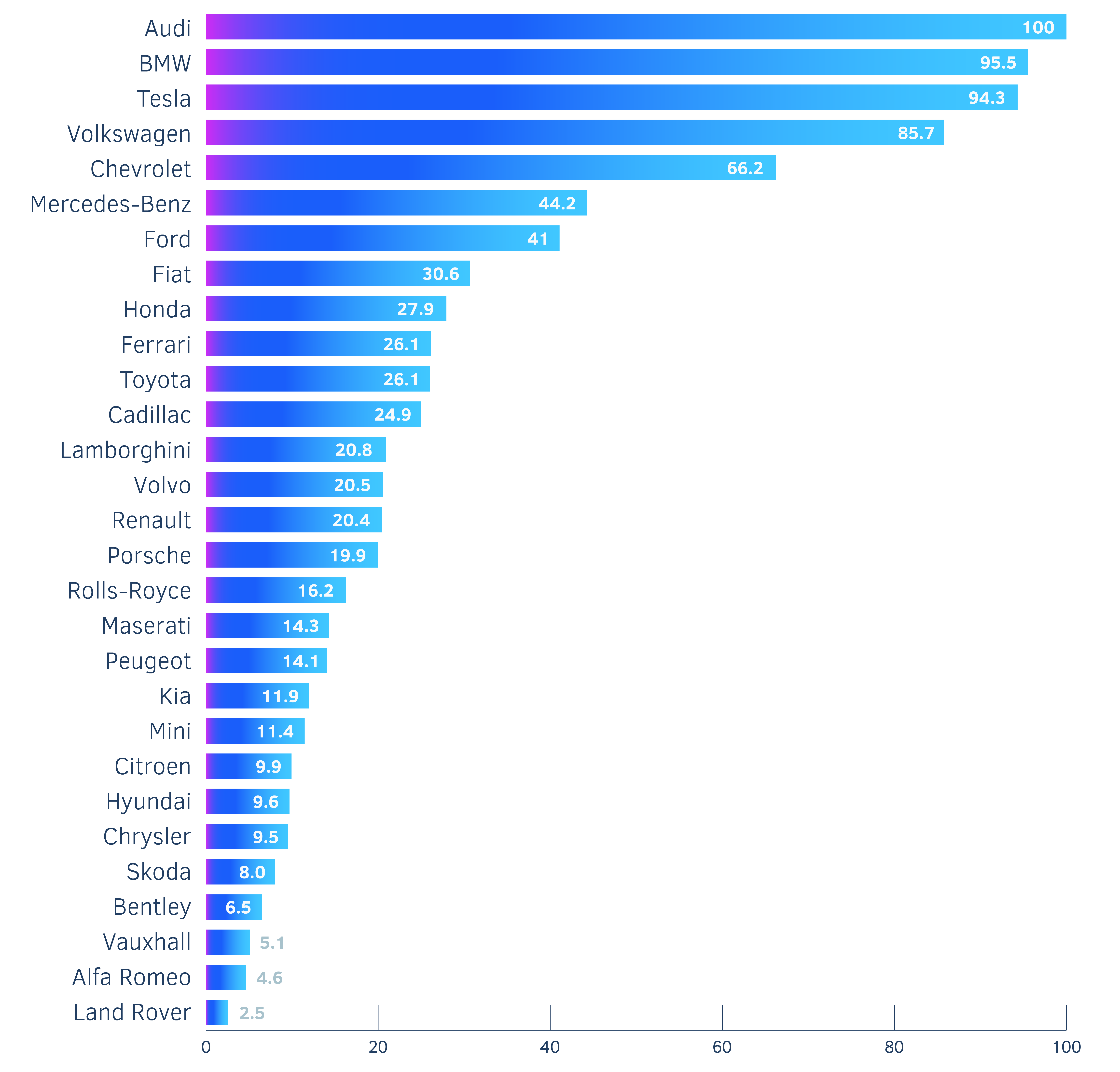 So how does Tesla do it?

There's still some hesitancy from CEOs when to taking to social media, but Elon Musk certainly doesn't fit into that category. In fact, I think there is an argument to be made that Musk's public popularity has a greater impact on his company than any other business leader.

From a follower numbers perspective, only Bill Gates with 38m+ followers can overcome Musk's 12.5 million on Twitter - but it's more than just his "numbers".

From a social perspective, Musk is also pretty personal. From talking about his new business ideas during his drive home to live tweeting rocket launches, his posts offer an inside view of what he cares about and is interested in at any particular moment. And he's not afraid to talk about failure either:

Putting together SpaceX rocket landing blooper reel. We messed up a lot before it finally worked, but there's some epic explosion footage ...

Compare this to other CEOs on social with similar name recognition - say Tim Cook of Apple or Satya Nadella of Microsoft, who mostly focus on corporate updates with occasional forays into current affairs.

This isn't an approach that necessarily works for everyone, but when you've built a hype machine as Tesla has done, the rules of social media start to change.

Instead of following the usual guidelines of "tweet this much, include videos" etc., you start to make your own. Tesla has only tweeted four times this month.

Why? Because they don't really need to do any more than that. Despite this lack of activity they are still in the top three most talked about car brands this month.

Tesla hoods signed by paint shop team to mark production milestones. Thanks to all of our teams for your work and commitment to our mission. pic.twitter.com/r8PzdBbOIK

This was their most shared tweet in the dataset we examined.

Again, it's not necessarily an approach that everyone can copy, but when you've got the world hanging on your every word, sometimes less is more.

It's all About Innovation

So what is it about Tesla that has captured the imagination? This is very difficult to put your finger on exactly, but I'd say one element of it is that a lot of people buy into Musk's vision of the future.

Whether it's sleek, environmentally friendly electric cars, smart solar panels, smart batteries, or private space exploration, it's a vision that people want to follow, or at the very least know more about.

From a social media marketing perspective, it's no surprise then that Tesla is the car brand most linked to topics like electric cars and autonomous vehicles on social, even though established car makers are investing just as much if not significantly more than Tesla in these areas.

The chart below shows the percentage of the social discussion held by each brand on the subject of electric vehicles: 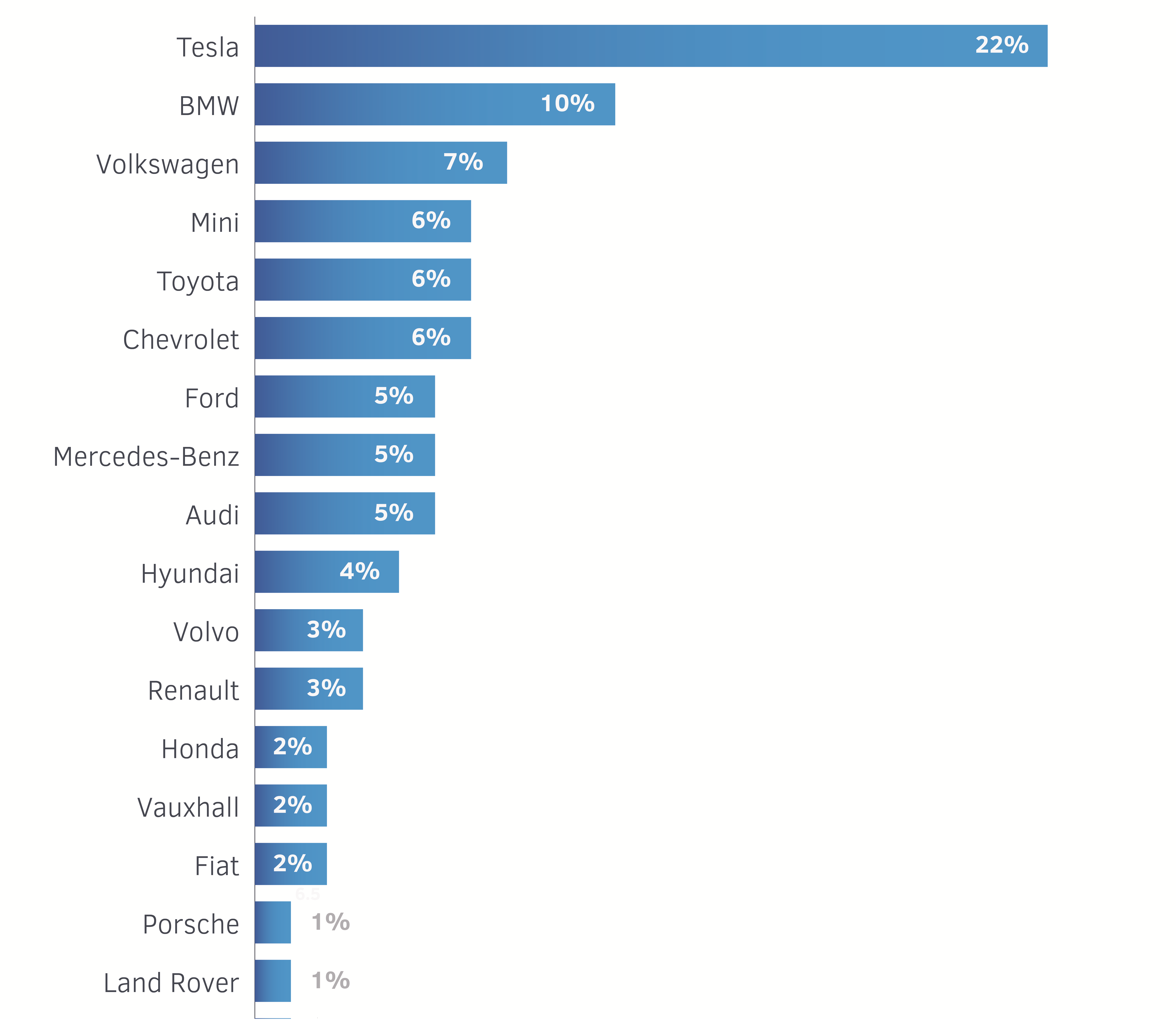 And the world's biggest producer of electric vehicles is? It certainly isn't Tesla. It's actually Renault-Nissan, all the way down in 11th on our list.

Tesla and Musk have managed to create a perception of themselves that enables them to compete, and really, outperform auto rivals on social.

What Does it Mean for Auto Marketing and Beyond?

It's difficult in many ways for established players to do what Tesla do in putting a single person front and center of their brand. Brands like BMW, Toyota, and Ford were founded decades ago and not every founder has the charisma and eccentricity of Elon Musk.

But providing a personalized, insider view on social media can help humanize your brand. Whether it's the CEO, another executive or a group of employees, consumers are increasingly interested in the people and values behind a brand (especially the big ones), not just the products. Musk's - and by proxy, Tesla's - popularity resides in his willingness to share his random thoughts, ideas, and even failures; where other executives, understandably, prefer to play it safe.

The problem is, social media is now such a noisy landscape that "playing it safe" isn't really enough to cut through the background noise. It may be a bit uncomfortable at the beginning, but now is the time for CEOs and executives to start being more visible on social media.

Your customers (and investors) are talking about you anyway, being on social lets you at least play some role in shaping their perception.

A version of this post originally appeared on the Talkwalker blog.