Was Oreo's 'Dunk in the Dark' Tweet Really a Runaway Success?

I was involved in a discussion about the upcoming Super Bowl and the pros and cons of newsjacking in a Twitter chat recently when another participant, Diana Wolff, tweeted this:

And she's right, that tweet's been discussed and analysed and referred to ad-nauseum for the past two years. And while there's much to appreciate about the 'Dunk in the Dark' tweet, the real question is 'was it effective?' Did more people buy Oreos as a result of that tweet? Is that even the true measure of real-time marketing success?

Did People Buy More Oreos as a Result of 'Dunk in the Dark'?

This is hard to say, and really, only Oreo and their parent company Mondelez International are able to judge the true return on their Super Bowl 2013 efforts. In terms of financial results, the actual financial attribution of that tweet is cloudy, as noted in by Danielle Sacks in her Fast Company piece "Oreos Tags Pop Culture":

Since Oreo embraced culture, the brand's annual sales growth is up from the low double digits to more than 20%. But analysts attribute that to its expansion into emerging markets in Asia. It's very hard to prove that new-media campaigns increase sales. During the Grammys this year, viewers who tweeted #SendMeOreo received a box of limited-edition cookies in new flavors that landed in stores a week later. "In terms of revenue, it was the biggest limited-edition launch that we ever had," says [Janda] Lukin, Oreo's North American chief. But no one at the company can tell me how-or if-"Daily Twist," the Super Bowl tweet, and the Twist, Lick, Dunk app affected cookie sales. Asked specifically about the Super Bowl, Lukin admits, "There isn't a great way for us to directly link it."

Given there were so many campaigns and changes occurring around the same time, it's difficult to directly attribute that tweet to an increase in revenue. But it definitely generated coverage, every media outlet from Forbes to CNet to The Huffington Post praised the genius of the Oreos tweet, which was universally considered to have won the Super Bowl ad blitz - some even questioned whether that one tweet did more for the Oreos brand than the multi-million dollar Oreos commercial that aired during the game.

Definitely the cumulative presence of these campaigns has had a significant and lasting impact, and has helped keep the brand within the awareness of many consumers, so in that sense, 'Dunk in the Dark' was obviously a huge win. Though the correlation is not as straight forward as many might suspect.

Did 'Dunk in the Dark' Improve Brand Perception?

Of course, sales alone may not be the true measure of the success of such coverage - it's possible that Oreos saw increased brand perception, became better placed in the market or within certain demographic brackets as a result. This, too, is very difficult to measure, and no doubt the flood of coverage Oreos has received as a result of that tweet (including the piece you're reading right now) has increased their overall brand awareness - but how beneficial has that one tweet been for brand sentiment?

Brand perception can be significantly influenced by a well-placed, real-time message. Arby's, for example, would have seen a major boost amongst a younger, hip audience when they sent this tweet in response to Pharrell Williams wearing a that now infamous hat at the Grammys:

That single tweet brought them significant recognition, and helped them reach an audience they may not have been able to otherwise - their brand perception definitely got a 'cool' boost in the reflection of that tweet. There're regular examples of brands utilising real-time response to benefit positive brand perception - just recently, Australian telecommunications giant Optus posted this to their Facebook account in response to a iPhone error which had caused the alarms of many of their customers phones to go off an hour earlier than set, due to a time zone glitch: 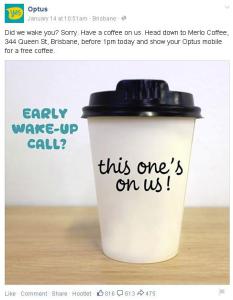 Of course, giving people a free coffee doesn't get them that hour of sleep back, but the extra effort to connect with their customers will have an impact on overall brand perception - it's no doubt better than just ignoring it and doing nothing at all.

So what about 'Dunk in the Dark'? Would that message have improved the perception of Oreos and made customers more aligned the brand? Outside of maybe making a few more people feel like eating some chocolate biscuits, there probably wasn't a significant increase in brand sentiment as a result of that message. It's possible, like Arby's, that they were able to reach a specific audience, through retweets and shares, that they'd otherwise not have hit, but again, how much would that perception reflect in the bottom line?

The question of effectiveness comes down to the specific people reached and the actions subsequently taken as a result of that exposure. The numbers themselves - re-tweets, followers and favourites - are not, in themselves, a true measure of success. As noted recently by Gary Vaynerchuck, metrics like follower counts don't necessarily correlate to success - reaching more people definitely increases your opportunities to convert, but getting through to just one person with the right message at the right time can be more successful than reaching 1000.

The discussion of 'Dunk in the Dark' and it's relative success, based on impressions and interactions alone, is the perfect illustration of were traditional broadcast focus collides with new-school targeting and analytics. In the past, the way to win at marketing was to hit as many people as you could, get as many eyeballs as possible looking at your stuff in order to increase the chances of reaching the right few. This is why blast radius is still seen as such a significant measure - but are impressions and reach really reflective of success? As big data becomes more embedded and we learn more about analytics, and how to link specific data points to profitable results, it's likely that bigger won't necessarily be seen as better when we reflect on marketing effectiveness.

Of course, exposure is, and always will be, of significant value, and research has shown that there are links between social interactions and website visits. And far be it for me to make a call on the success of 'Dunk in the Dark' - the only people who can do that are Oreos themselves - although it as interesting that for such a huge, massive, win, they didn't even try to replicate it, noting before the 2014 Super Bowl that they were 'going dark' this time round. No, the purpose of this post is to widen discussion of the metrics and what constitutes marketing success, particularly as brands gear up to wade into the trending currents of Super Bowl 2015.

Effectiveness is relative, it's up to us to correlate the data and show what it means in the wider scheme.