Social Media Micro-Influencers: What Are They and Where do you Find Them?

Social media influencers are all the rage right now, with marketers and businesses clamoring to utilize influencers to promote their products or services in order to reach a larger audience.

As a small business, however, it can be difficult to get those big names to help support you - and that's where micro-influencers come in.

In this blog post, we'll look at what social media micro-influencers are, where to find them and how they can help boost your outreach strategies.

Micro-influencers are basically influencers with a smaller audience - generally of under 100k, but over 10k followers.

They can be anything from bloggers to just a regular person that's built a loyal following on social media.

But it's not just the number of followers that makes a micro-influencer. Just like with regular influencers, the number of engaged users is far more important. This is what shows that their audience is truly interested in this person, that they care about their point of view and opinion and that they listen to them.

Why use micro-influencers and who are they for?

If you're thinking about using influencer marketing to promote your business, micro-influencers are a great place to start; particularly if you have a small business, or if you're an entrepreneur or solopreneur.

As a small business, it's more difficult to get the big influencers on board - and not to mention, it'll also cost much more overall.

The thing is, even if a micro-influencer has a much smaller audience, that doesn't mean necessarily that micro-influencers won't be able to make a huge impact on your success.

In fact, a smaller audience can sometimes even be a good thing - in many cases, the smaller the audience of an influencer, the more targeted and engaged they are, in large part because they're following out of genuine interest (while a bigger influencer might get lots of new followers simply because they already have a lot of followers). Micro-influencers also have more capacity to actively engage with their connections, while a huge influencer would never be able to interact with every member of their audience.

There are benefits and draw-backs for both micro and macro-influencers, but for small businesses - especially when they have an equally small budget - micro-influencers are definitely a great place to start.

What to look out for when researching micro-influencers

When researching micro-influencers, there are a few different things that you should keep an eye out for.

As I mentioned earlier, it's important to look beyond the number of followers - in fact, in some cases, an influencer with 10,000 followers can hold a lot more power than one with 100,000 - so, don't be blinded by numbers when researching influencers.

Instead, focus more of your attention on how they're engaging with their audience and how their audience is engaging in return. Don't just check their stats (i.e. how many likes they get on average), but actually take the time to look at the conversations they're having. The more there are, and the more genuine they are, the better.

Another important thing to look for is what they're posting on their social media profiles.

When researching micro-influencers, you should also try to research their follower base. Do you two share the same target audience?

You should research their followers' interests and passions, their ages, as well as their location if you only operate in certain areas, and basically any other stat of relevance to your particular business.

Where to find micro-influencers

The first step in looking for micro-influencers is to take a look at your own followers, as there might be some influencers among them. This would be ideal, as it would mean that you already have an 'in' with them - if they're following you, that could mean they're already fans of your business, or at the very least, of the things you post on your social media.

To search through your followers, you can do it manually by looking to see who has a bigger following, and then checking their profile and activity - or, to save time, you can use a tool.

For example, you can use something like Agorapulse, which has a CRM tool that automatically ranks any influencers and even brand ambassadors (i.e. users who have shared and helped promote your content) among your list of fans and followers.

Because these users are already familiar with you and your small business, it'll be that much easier to get them on your side than it is with influencers who don't know about you, so it's the ideal place to start your influencer marketing campaign. 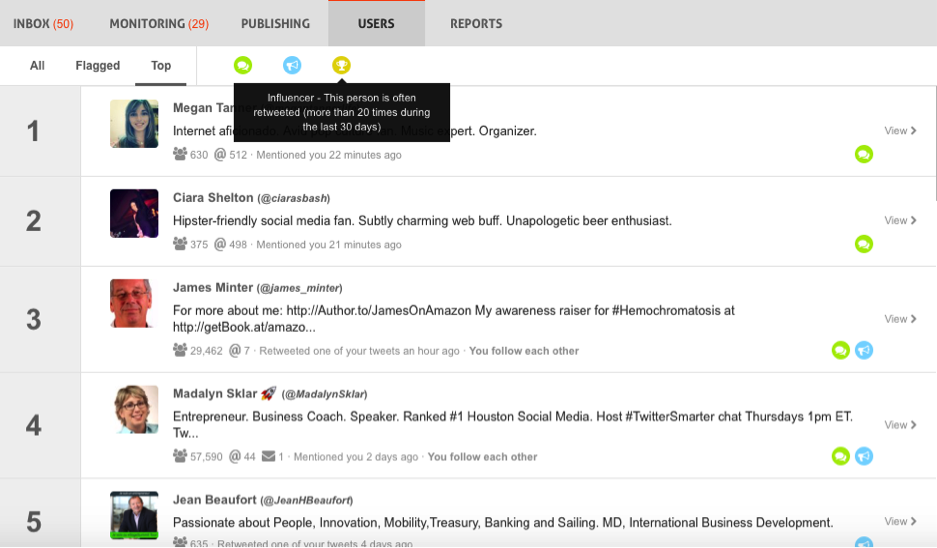 Another useful tool is the popular Buzzsumo. BuzzSumo enables you to search for influencers by using relevant keywords - but the best part is that you can filter them in various ways.

If you only want influencers from certain locations, you can filter them by country, or even the city. You can also filter them by the type of influencer you're looking for, such as bloggers, companies, journalists, social influencers and even regular people.

Furthermore, you can sort them by relevancy, their website's domain authority, their number of followers, as well as their average reply ratio to see how often they engage with their followers.

Influencer marketing is one of the most effective forms of promoting your business online. That said, for small businesses who might be struggling to get influencers on their side, micro-influencers are a better place to start.

Although they have a smaller audience, they can be extremely successful at helping you promote your small business. Remember to look for the stats that matter, such as their engagement ratio, the relevancy of their followers, as well as how much they're engaging with the influencers.

The most important thing to look for, though, is not the number of their followers, but rather, how engaged these followers are. Don't underestimate the power of an influencer, or even a regular person, just because they only have a few thousand followers on social media; if these followers are actively engaging and clearly interested in what these influencers have to say, then getting them on your side will help you grow your small business much faster.