International Women’s Day is recognized every year on March 8th. It was first organized in the United States in February 1909, and later became an annual tradition after it was ratified at a conference in 1910. The date of March 8th is significant, because that’s when women gained suffrage in Russia in 1917. In 1975, it was adopted by the United Nations. And while it's not a holiday in all countries, it’s certainly a day to celebrate womanhood around the world.

Recognizing the significance of the event, for the last three years, the Native Advertising Institute (NAI) has put together a listing of the top 100 most significant women in native advertising, which celebrates the contribution of women to the sector.

The list is the brainchild of Stine Holmgaard, COO and Partner at the NAI. I propose that next year this list becomes the "101 Significant Women in Native Advertising" – to include Holmgaard. She wouldn’t say it, but she definitely belongs at the top of the list, too.

“I’m still stumbling upon research, showing in hard figures, the underrepresentation of female leadership in our industry,” says Holmgaard. “These numbers act as a testimony to what I hope to be an unconscious bias that champions masculine work, lack of inclusion of women from official conference agendas, and lack of female role models.”

Holmgaard practices what she preaches, too. I’ve been fortunate enough to work with her directly at the NAI, and the many events she manages. In fact, many of the women on this list I've met at at least one of the events she coordinated. There’s no doubt that she’s doing her part to shed light on the contributions of women in our industry globally.

With a little history out of the way lets explore the 2019 women movers and shakers in native advertising. There are so many of my professional friends and colleagues on this list - congratulations to you all. Unfortunately, I haven’t had the pleasure of meeting all 100 women recognized by the NAI. As a result, I’ll focus on the women that I know professionally in the industry. The rest of the list can be checked out on the NAI’s website. 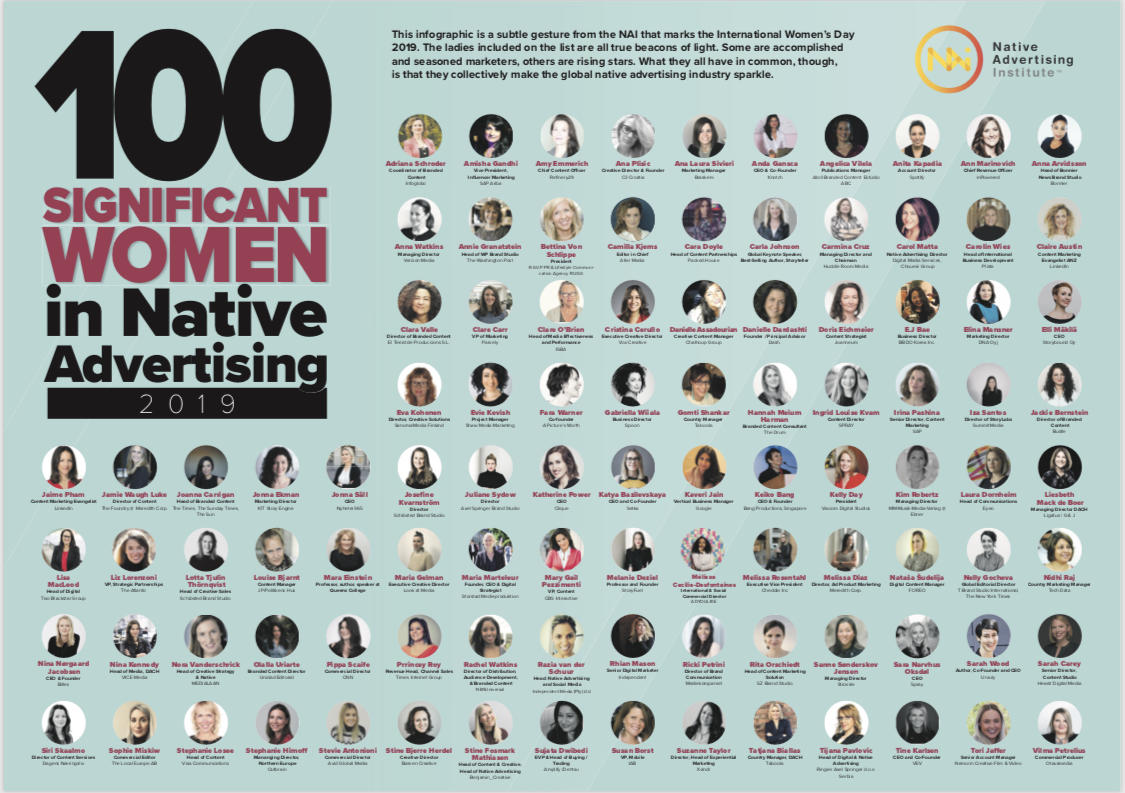 You can download a larger PDF poster file here.

Amisha Gandhi – She is Head of Influencer Marketing at SAP, and previously led mobile product marketing and communications. I was fortunate enough to spend time getting to know her this past November in Berlin, where she promptly corrected the lighting for my food selfie shot. Thanks, Amisha.

Carla Johnson – Johnson is a world-renowned storyteller, an entertaining speaker, and a prolific author. Whenever I hit the road for an event, she’s almost always there - over the last two decades, Carla has helped architects and actuaries, executives and volunteers, innovators and visionaries leverage the art of storytelling to inspire action. Her work with Fortune 500 brands served as the foundation for the latest of her seven books.

Clare O’Brien – With a lifelong career in media, PR, and marketing, O’Brien has been an influential practitioner in the emergence of digital content as a discipline, and its role in the monetization of digital media platforms. A couple of years ago, I was lucky enough to talk shop and IAB UK with her at length. She’s a true industry leader.

Melanie Deziel – Deziel is an award-winning branded content strategist, consultant, and keynote speaker who travels the world teaching marketers and publishers how to tell better brand stories. Not only does she crush it on stage, but her slides are designed so well that I’m jealous. Something else to be jealous of? Her work ethic. Way to go Melanie.

Stephanie Losee – Losee is the Head of Content at Visa Corporate Communications. Her previous two roles were Head of Brand Content at POLITICO, where she launched the publication’s custom content studio, and Managing Editor of Dell, where she directed Dell’s editorial content strategy. I was lucky enough to sit on a panel with her once. She’s the epitome of a thought leader in this space.

Thanks for shining a light on this important topic, Stine. Looking forward to next year’s addition.

A version of this post was first published on the inPowered blog.