What’s the best way to get people talking about your brand?

There's no definitive answer, but one of the best ways is through social media - but the challenge for most of us lies in finding new ways to leverage social in a smart way, so that you get people talking about our business in a positive manner, helping to build awareness.

Instead of banging your head against the digital wall, it’s more useful to study how some brands have used social platforms to motivate their audience to engage on a deeper level with their products and services.

Here are three examples of campaigns which have got people talking, and how you can use similar approaches in your efforts.

As an upstart makeup company trying to carve its own niche, NARS has embraced the power of social media to provide its audience with unique experiences which distinguish the company from the more established giants.

In line with this, prior to unveiling its Guy Bourdin color cosmetics line to the public, NARS decided to preview the collection on Snapchat. 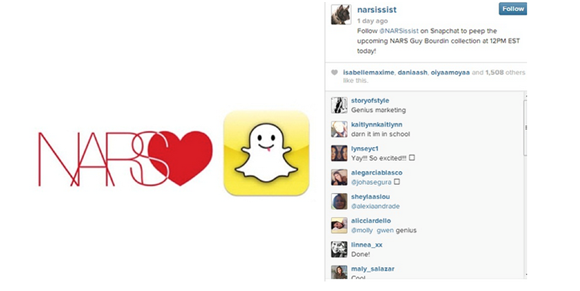 It was a good choice, because NARS' target audience of teens and young women are among the most acvtive users of Snapchat, where they both exchange snaps with connections and follow brands to see what they're up to.

NARS did something smart by making the preview exclusive to Snapchat, and by only allowing people that added ‘NARSissist’ as a friend on their Snapchat account before a specific date and time to preview the makeup collection.

Remember also that Snapchat videos and images fade after 10 seconds, so what NARS did was build awareness by only offering a short glimpse of the new collection, knowing that their audience would want more.

By leveraging the power of expiring content, NARS ‘preview’ was really more of a tease, just enough to make its target audience start talking about the collection in a meaningful way.

For example, if your company makes video games, you could preview 10 seconds of the game on Snapchat or Instagram to get fanboys and fangirls keen for more.

You could even use the ‘stories’ feature on both of these platforms to give your audience 24 hours of the tease experience, to generate even more buzz.

Worldwide Breast Cancer is a nonprofit that isn’t as well known as some of the big charities, so building awareness through social media is vital to its existence.

The organization’s #KnowYourLemons campaign was a brilliant bit of marketing, in which it used a crate of 12 lemons to explain all the different warning signs of breast cancer. 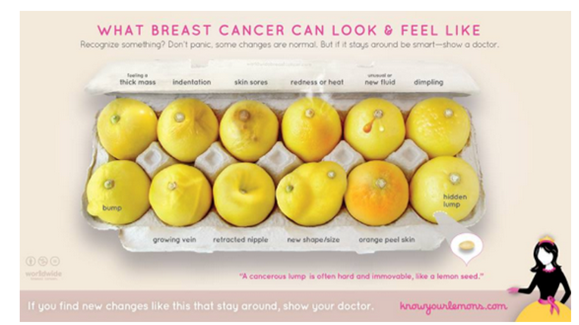 It's a powerful example of how a clever hashtag can generate interest for a piece of content that's equally strong.

Once the image is coupled with the hashtag, the full impact of the message is apparent. This is a brilliant way to educate women about what to look for when they perform a breast cancer check at home.

The message is clear, visual, and easy to understand. It’s no surprise that the campaign boosted awareness and helped Worldwide Breast Cancer exceed their target fundraising by more than 300%.

Find a clever hashtag that ties into your campaign, and an image which educates in a humorous but clear way what your business stands for.

For example, a company that sells power generators could create a hashtag like #DontBeIntheDark, and center its social media campaign around an image split in two.

Even big brands like Wendy’s are mining for social media gold, and the company's smart enough to use its own social media followers to generate excitement and get people talking.

A teenager named Carter Wilkerson tweeted Wendy’s that he wanted to earn a year of free chicken nuggets and asked how many retweets it would take for the company to grant him his wish.

Instead of ignoring the tweet, Wendy’s responded that if Wilkerson could get 18 million retweets, he would get the free lifetime nuggets.

HELP ME PLEASE. A MAN NEEDS HIS NUGGS pic.twitter.com/4SrfHmEMo3

The problem was that the existing record was around 3 million, generated by Ellen DeGeneres’ Oscars selfie in March 2014.

Wilkerson started tweeting everyone he knew, and within a day, he'd collected a million retweets, and the attempt was being tweeted by giant brands like Google, United Airlines, and Amazon.

Sensing the viral nature of the campaign, Wendy’s created the #NuggsForCarter hashtag, which was mentioned more than 200,000 times across the platform.

And all of this publicity was organic, triggered by Wendy’s smart use of user-generated content to its benefit.

Look for opportunities for your social media followers to create contests or challenges that will get your audience, and people outside of your audience, talking about your company.

When your social media campaigns get people talking, it should never be by accident. These three brands made sure that their campaigns were tied to their products and services, or to an experience that they wanted their audience to have.

Marketing is one big puzzle, and social media is just one piece of it. Recognizing that this can be a powerful piece of your overall strategy can yield rewards and benefits beyond what you'd expect or can predict.